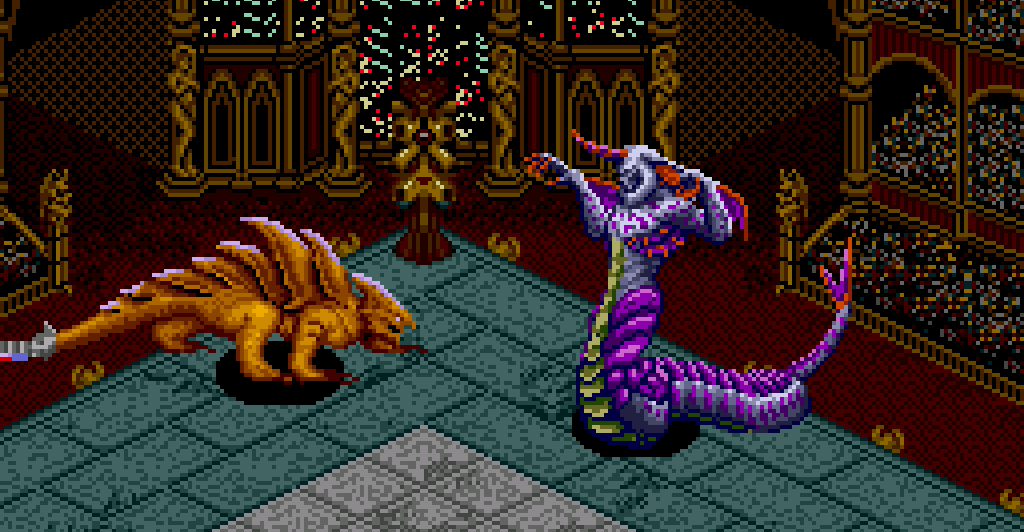 It has been said that the newest Evercade cartridge is a response to fans demanding more obscure and lesser-known games for the retro-centric handheld. We’d say it was inevitable that manufacturer Blaze would have to look further afield at some point. There’s only a finite amount of hand-me-down Atari and NES arcade conversions out there, after all.

Considering many Renovation games were never released in Europe, an introduction appears to be in order. They were one of the more prolific SEGA Genesis/Mega Drive publishers, releasing around 20 games during the console’s lifespan, along with a handful of SEGA CD/Mega CD titles. Developer Wolf Team was under their wing, best known for providing the Mega CD pack-in title Sol-Feace, and they also published SEGA’s sleeper hit Gain Ground in the US.

While it’s fair to say the likes of Wolf Team were more than familiar with the 16-bit system, with some games boasting effects you wouldn’t expect to see, Renovation’s output was wildly inconsistent. They released not only some of the system’s finest, but also some of its worst.

But even the worst games in their library were in some way interesting, and this is why the publisher – as a whole – is fascinating. They weren’t afraid to try new things, with Earnest Evans’ multi-sprite characters being a fine example, which ultimately lead to a diverse portfolio of games.

This cartridge brings twelve titles together – roughly half of Renovation’s back catalogue. SEGA reclaimed the rights to Gain Ground, Arrow Flash, and others back in 2011, giving some explanation as to why this isn’t a complete collection. There’s a good mixture of genres at hand, nevertheless, making this one of the more varied Evercade cartridges – some games are ideal for a five-minute fix, while others are slower burning. Specifically, the two JRPGs present.

Presented in alphabetical order, Arcus Odyssey is the first game listed. It’s an isometric dungeon crawler with four playable characters, inviting comparison with Gauntlet. Visually it’s tidy and there’s a degree of depth, although the tough difficulty and maze-like environs won’t be to everyone’s taste. Chances are Beast Wrestler won’t be to anyone’s taste – it’s a slow, cumbersome, affair with grapples that drag. Not only this, but it’s often unclear what’s happening when locked in a tussle – attack animations are, frankly, bizarre. But just to illustrate that no Renovation game is flat-out terrible, character designs are wholly inspired – a delightfully monstrous bunch.

Dino Land couldn’t be any more different, being a cutesy pinball game with a fantasy theme and largely unrealistic physics. Also: an amusing typo (“BIGINNER”) on the options screen. As a full-price release in 1991, it was limited in what it had to offer. As part of a £20 collection in 2022, it’s a nice little diversion. Time has been surprisingly kind to it.

El Vineto is one of the cart’s highlights, and if you’re a SEGA collector, you’ll know that it’s one of the more expensive games to own. Collectors have pushed the price up to around £200 for a genuine copy. It’s a fast-paced action platformer with a novel 1920’s setting, featuring fluid animation and surprisingly large explosions. It almost justifies this cartridge’s £20 price tag alone.

For Evercade owners looking for a JRPG to get into, Exile may fit the bill. It has an Arabian setting – which wasn’t too uncommon for ‘90s role-players – and during combat, it transforms from a top-down view with diminutive characters into a scrolling action platformer with large sprites. Screen borders make everything seem a little cramped, however, and we also found it very easy to accidentally skip text. Most NPCs repeat whatever they had to say, so this isn’t too damaging.

Final Zone isn’t too difficult to explain – it’s an isometric mech shooter set within large maps where enemies must be tracked down using a radar. It’s generous with continues and the difficulty level is fair. Not a classic, but passable. Oddly, Granada plays similarity, only from a top-down perspective. It’s almost as if Granada was a prototype version of Final Zone.

Next comes two more collection highlights – Gaiares and Sol-Deace. Yes, Sol-Deace – this is the cartridge-based version of Sol-Feace, rebranded to distance itself from the word faeces. Both push the Genesis hardware, with large bosses and detailed cut-scenes. Progress relies heavily on memorising enemy attack patterns and placement, meaning it takes time and some patience to make headway. Gaiares is certainly the more punishing of the two, and like El Viento, it can be expensive to acquire a physical copy nowadays.

This brings us to Traysia – the cart’s second JRPG. Sadly, this won’t satisfy fans of the genre, and just like Beast Wrestler, it’s a Renovation faux pas. Drab, slow, unexciting, and rather unappealing thanks to its predominately brown colour palette – it’s no wonder RPGs had a bad rap in the west with examples such as this on store shelves.

Lastly, there’s Valis and Valis III. Valis II skipped the Genesis, for those unaware. These are anime-style action platformers where the female lead (joined by two additional characters in Valis III) attacks with an upgradeable shoot’em up style projectile weapon. They’re nicely presented, although if you’re more accustomed to the likes of Shinobi 3 and Alien Solider, you may find them sluggish. Valis III is worth your time though, being leaps and bounds over similar games on Evercade.

That’s the takeaway here, I feel. The majority of games present aren’t stone-cold classics, yet they’re still far more interesting than a lot of stuff we’ve seen on the Evercade so far, covering genres genuinely exciting and enticing to this day. Gaiares, Sol-Deace, and El Vineto alone are enough to justify this cartridge’s existence, and you may find yourself a new favourite within the rest, Beast Wrestler and Traysia aside. Two duds out of twelve isn’t bad going at all.

Evercade Renovation Products Collection 1 is available now for the Evercade. Funny, that.