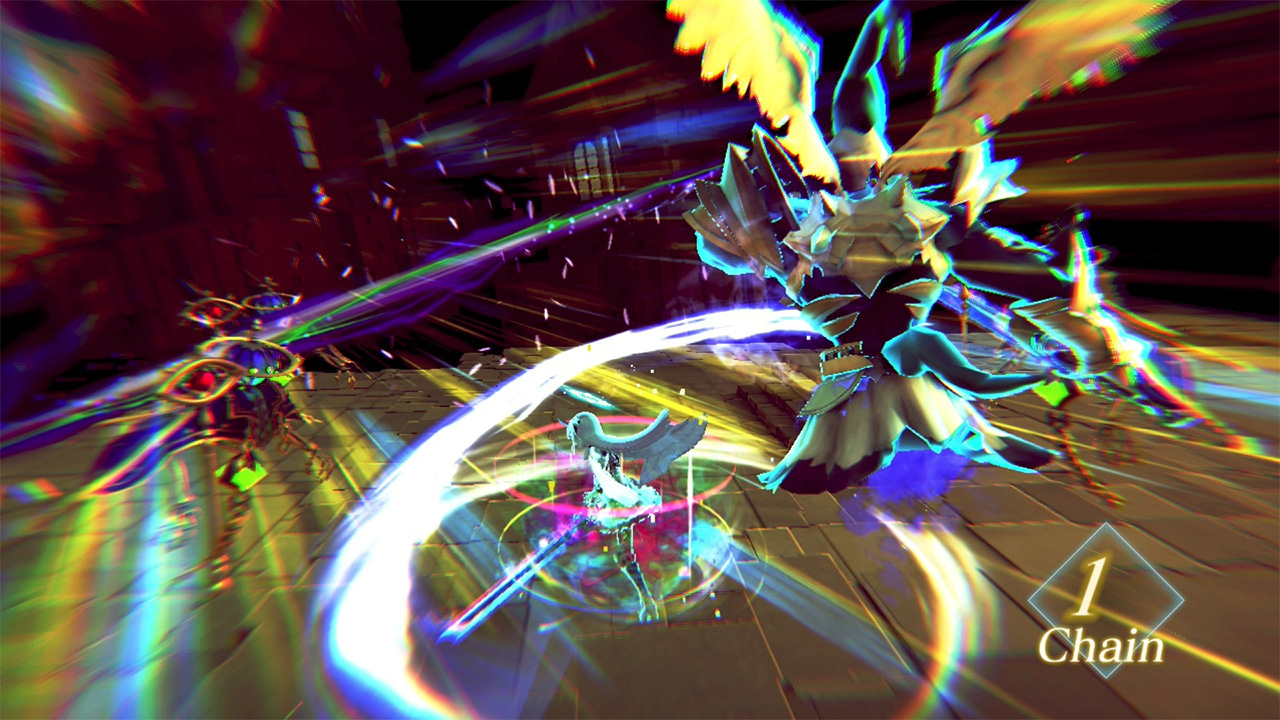 Another week, another new JRPG for Switch. Where we’re meant to find the time to play them all is anyone’s guess. NIS America’s Crystar appears to be worthy of your valuable time, at least, with review scores mostly clocking in at 7/10.

It also includes all the DLC from the PS4 version while arriving at a lower price.

Set in a grim world where souls dwell and tears grant power – hence the title – it sees a mixture of characters battling beasts in the afterlife.

10tons’ Dysmantle is a belated conversion likewise. A bittersweet post-apocalypse affair, it entails exploration and character progression, as you trek around a ruined world looking for loot and resources.

Then there’s Ikai, an intriguing first-person horror adventure centered around Japanese folklore. God is a Geek dished out an 8/10 – praising the visuals and puzzle elements – while Noisy Pixel found it to be a little short and light on content. That’ll explain the £13.49 price tag, then.

Others to consider this week include a surprise release of the NeoGeo Pocket Color’s Big Bang Pro Wrestling, the arcade-style Spy Hunter alike Agent Intercept, pixel art run ‘n gunner Super Cyborg, clay-based stop-motion platformer Floogen, and tERRORbane – an RPG where glitches and exploits must be used to progress.

Ikai is a first-person psychological horror game drawing inspiration from Japanese folklore. Live the horror by the hand of its defining yokais and submerge into the superstitions of the past driven by a unique story and exploration.

Ikai embodies the spirit of the classical psychological horror genre with a defenceless main character incapable of attacking the evil creatures. However, it explores a new sense of horror by making the player face the threats directly neither fleeing nor attacking.

Take control of the Sceptre, the Agency’s latest high-tech transforming vehicle, and face off against the criminal organisation CLAW in this explosive arcade driving game.

Dodge enemy fire, mines and lasers as you perform over-the-top stunts and use the Sceptre’s high-tech gadgetry to blow up your enemies. Feel like a superspy as you transform the Sceptre from car to plane and more, immersed in exotic locations and an original high-energy soundtrack! With a new threat around every corner, it’ll take all you’ve got to defeat CLAW.

An Agent’s work is never done. Agent Intercept offers extended playability beyond its rich campaign. Tackle side missions, unlock experiments and prove your worth as a superspy on our global leaderboards!

Richy’s Nightmares is a unique kind of platforming experience. It tells a story of Richy, a little boy who got lost in the labyrinths of some dreaded magical woods. And now he has to do his best to survive through this journey. The forest is full of nightmares and lethal puzzles, and that is why Richy’s escape is going to be the challenge to remember.

Here you’ll find immersive gameplay and dark fantasy setting bundled together. But be aware that you will not get your reward easily – this game is best suited for the players who prefer to explore the surroundings and find any kind of vital clues to ease the burden of this strong-spirited survival.

Here it is, what all gamers have been waiting for – AAA Clock, an amazing flip clock.

Imagine a watch. A simple, fail-proof design. Well, simple. But what if your watch was… amazing? RedDeerGames introduces the world’s only AAA Clock – a truly new quality watch for the Nintendo Switch™ console!

You can also establish your own airline and fly to cities such as New York, London, Sydney and 18 other destinations. Fly the most popular models of planes, such as jumbo jets, seaplanes and a military jet with realistically designed 3D cockpits. Experience challenging weather conditions and try to land your plane safely with an engine failure in this flight simulation game!

It’s about to pop off! Muscle-bound wrestlers take the stage for a bombastic all-out brawl! Easy controls allow you to pull off sick and devastating special moves from the push of a button!

Enjoy 2,250 puzzles across 3 difficulty levels, and written in classic British English. The clues are shown right in the puzzle grid, making crossword puzzles easy to view and play.

Dieselpunk Wars is a vehicle-building game set in an open, vast world. Not only will you construct a war machine of your dreams, but also take it for a spin on the deserts, in the mountains or the swamp. The game offers over 300 unique elements, many different materials and paintable armors that will enable you to build a remarkable machine. Different types of armor, cannons, motors, wheels and drives will allow you to construct driving, floating and flying machines. Build fighters, transporters, tanks, destroyers, airships, and many more. Enjoy the freedom of creation!

Take part in massive battles, unleash the full potential of your vehicle and launch an invasion to conquer entire Islands in a single-player campaign. Discover the weaknesses of your enemies’ vessels and figure out their battle plans. You’ll have many different weapons to choose from, including missile launchers, machine guns, flamethrowers, torpedo launchers, bombs, depth charges, and crazy close combat weapons.

Set long after humanity has polluted this planet, groundwater is undrinkable and seeing a living plant is considered a luxury. Most people live in megacities that rely on the labor of poor masses to sustain a modern standard of living for the few at the top. With the Earth scorched, water is liquid gold, and control of it is the truest form of power. Forced to cope with a permanent water shortage, ordinary people persist and toil in the hope that if they work hard enough, they too can someday swim every morning in the refreshing pools of the Gardens.

We follow the story of Josephine Lace, a young hydraulic engineer eager to climb the corporate ladder and claim a spot at the top. Until the day when that promising future is ripped away from her, leaving her half-dead and homeless, she becomes hellbent on taking down the system that ruined her and left her without a heart. Along the way she meets a diverse group of people sympathetic to her cause, every one with secrets of their own. With their help, perhaps she will find redemption, love, and most of all – vengeance.

Bridge Builder Racer is the ultimate test for your engineering and driving skills. Build your own bridge to race your car from start to finish. Reach higher star ratings by spending as little as possible on your bridge. Create slopes and jumps to race your car and earn the top rating across the levels.

An all-in-one collection for all your card game needs!

Test your might against players from all over with online matches, or bring Nintendo Switch™ consoles together for a local showdown. The choice is yours! If you’d prefer to play alone, the computer AI is more than willing to oblige!

Complete a variety of achievements, unlocking new game backgrounds and music tracks, or test your mettle in challenge mode, where you’ll have to take on an assortment of puzzling trials!

As you ascend from your shelter after the long long years, a brave new old world awaits you. A world inhabited with nasty and vile creatures. A world with no other human soul to be seen. A world with nature in reigns now. A world that’s about to get even worse.

You need to find a way to escape the wretched island. But before that, enjoy the bittersweet apocalypse.

“In this stream of time, we have met again.

Then this must be fate, isn’t it?”

Here starts the cosplay-love story between the newbee designer and mademoiselle!

Glitchhikers: The Spaces Between is about the thoughts that exist between destinations, the parts of journeys that dominate our time but not our attention, when our minds wander to parts of ourselves, and our world normally left unexamined. On a late-night highway drive, a quiet train car in the early hours, a walk through a moonlit park, or the endless wait in a deserted airport, we listen to weird music amid the ambient announcements of delays and question our place in the universe.

Inspired by long travel and the stream of consciousness it fosters, Glitchhikers asks you to look inward. Find the answers to your questions and question the answers you receive. Ruminate on life, the universe, our place and purpose in it. Voyage through a freeform narrative experience, converse with the endless inevitability, and explore the cosmic, hopeful world you find yourself in.

A follow up to the critically praised short game released in 2014, Glitchhikers: The Spaces Between is an expanded experience, reborn and reimagined.

To atone for her sins, Rei must fight her way through Purgatory and save her fallen sister. Swap between a cast of four playable characters and unravel the truths and tragedies of their pasts. Turn your pain into power by summoning mighty Guardians to stand alongside you. And when overwhelmed with grief, draw strength from your tears to grow stronger.

By overcoming the enemies around her, and the inner conflict within her, only then will Rei release herself from her own suffering.

A wise sorcerer created six magical jewels that kept the effects of the third dimension at bay, granting peace and prosperity. However, one day an evil masked thief named Hex disrupted the balance and made the chaos return.

The only who can stop the chaos is Flat, a little hero able to change into a circle, triangle or square in order to solve puzzles, overcome obstacles and defeat giant bosses!

tERRORbane is a comedic adventure where bugs are your FRIENDS!

Enjoy exploring a crazy and outlandish world, full of unique, quirky characters and homages to the media of videogaming and its celebrated history, challenge the Developer with your creativity as you exploit and cheat your way through his sloppy design to try to get to the heart of what is truly needed to make the best games work.

Super clown’s mission is to find red magic diamonds at every level. The game consists of 25 fun levels with different themes like space, snow, medieval etc.

See the Evil flying golem and his army, which consists of enemies like: immortal skeletons, shooting cannons, virus slimes, wombats and evil blue dragons, everyone of those is protecting the red diamonds. Super Clown needs to use his jumping skills to defeat enemies. Some enemies, like cannons and Big boss Golem, fire blue energy balls. Kill Golem enemies by jumping onto their heads.

In some areas the player needs to kill the Evil Flying Golem to unlock Red Magic diamond’s place.

Explore a stop-motion world, crafted with clay, cardboard, and tape.

Battle the parasitic melon beings Floogen, and end their reign of terror.

A 2D action game where your average girl about town just happens to be a pop star and a super hero too.

You are an elite battle cyborg who is sent in to investigate a series of anomalies on a mysterious island. The merciless and powerful alien known only as the ‘Xirxul life form’ has been awakened by unwitting scientists and now: all humanity is in danger! Shoot, run and jump through 7 levels filled with endless hordes of biological monsters and some of the fiercest boss fights in any title. Destroy everything that moves on this island, because if it moves- it kills!