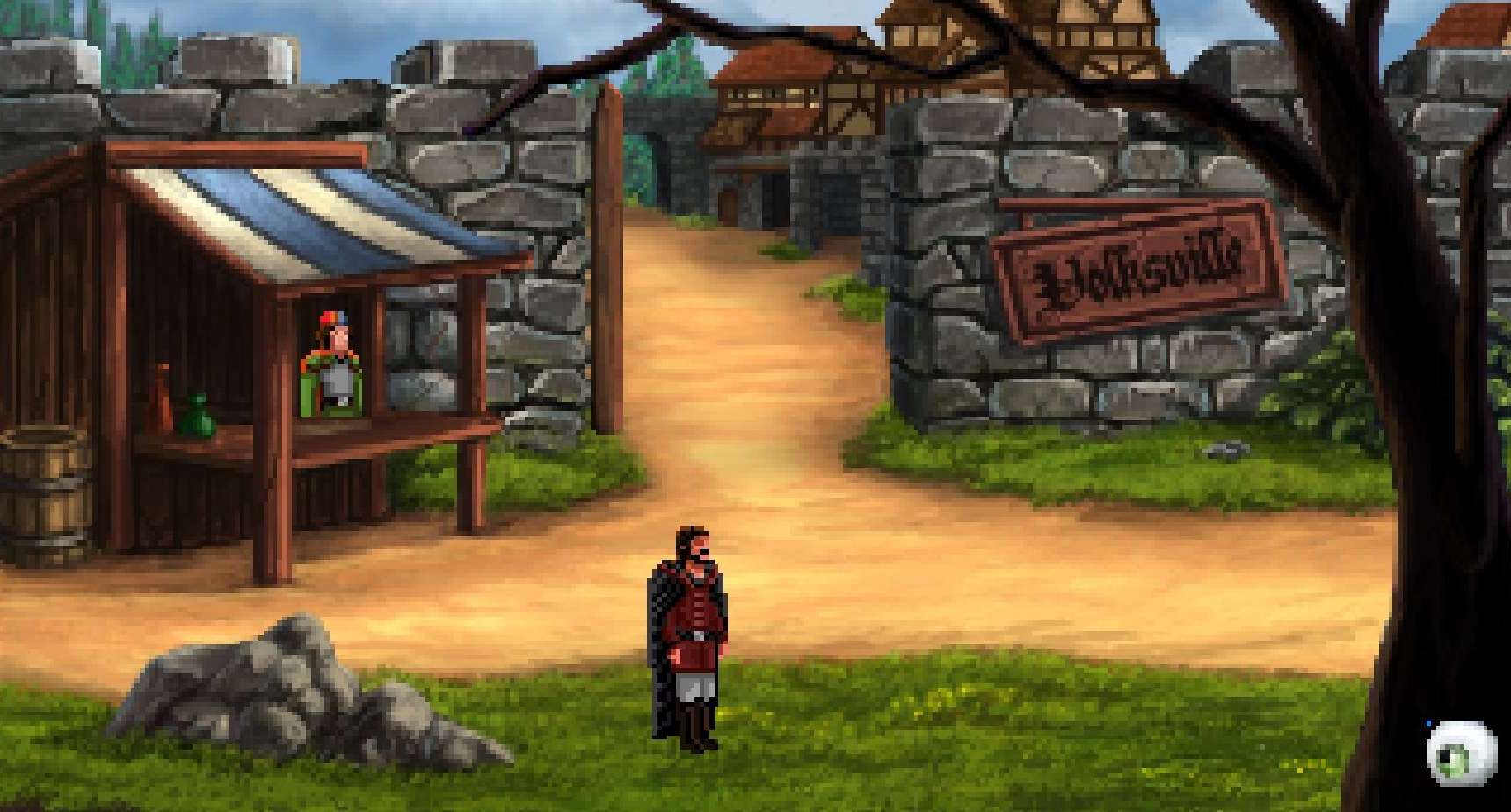 Ambition is a great driving force. How many people who have achieved truly great things in this world would’ve done so without their ambition? But when asked about my ambitions, I’m always a little coy about the answer. Where it’s common for many people to wish for fame, I’m the opposite. Infamy, after all, is way sexier.

And this was what drew me in with the overall concept of Quest for Infamy. Patterned after (and actually almost an ascended fangame of) the classic PC point ‘n’ click adventure/RPG series Quest for Glory, this ambitious effort was originally kickstarted in 2012, canceled then revived, released on PC in 2014, and now it’s finally on consoles. This is a beast after my own heart, in that it too decides infamy is the sexier option.

Speaking of which, the game opens with a depiction of roguish protagonist Mr. Roehm enjoying some forbidden intimacy with the daughter of a Baron, who is more than a mite displeased and wants Roehm’s head for it. And so, Roehm makes haste and gets the hell outta dodge, tout suite to the neighbouring village of Volksville – which is where the story begins properly. Or rather, where one of three stories begins: there will very soon be a player-driven divergence into Brigand, Rogue, or Sorcerer, each offering their own abilities and puzzles. After, of course, some fetch-quest puzzling.

And it’s here, early on, that the sense of the game’s scale becomes apparent. In the prologue alone, there is so much to explore and interact with in some way. Most of which are voiced by a cast of diverse nature (and, alas, quality – but I’ll get to that), with even a narrator to describe to the player the various objects and places and things. And this only expands as the game goes on and the north bridge is fixed, giving even more content. As I say, ambition – this game sure has it in spades.

But also early on, the cracks start showing. The interface for console play is functional at best, clunky at worst, and there are some scaling issues with the Roehm sprite when walking around into the distance, resulting sometimes in a Very Tiny Man™ dwarfed by the scenery on more than one occasion. Plus, if you have hotspots enabled for easier navigation, occasionally there will be an unnamed default ‘Hotspot 7’ or whatever.

And the voice acting, oh the voice acting. Roehm himself is excellent. The delivery of his lines completely and convincingly sells the illusion of a lovable rogue, and it was a joy to hear his various quips, taunts, jokes and heckles at the expense of many an NPC – or flirting in the case of almost every sprite that looked remotely-female. However, the narration-and-description guy? Annoying. They reminded me of that friend-of-a-friend we all know who will spend upwards of an hour “info dumping” about his favourite tabletop wargame because somebody in earshot dared mention its name. Not just in delivery, but the descriptions often carry that same flavour of inept sarcasm.

Other voices range from terrible to great, with a broad smattering of accents, and even the occasional “did you record this in your bathroom?” sting of ambient reverb for added effect. But, given the homegrown amateur nature of the game and the sheer volume of it all, it’s hard to hate it. There’s a lot of good in there, and a lot of bad. Because, well, there’s a lot of game.

A lot of game, though, means a lot of time spent wandering around. There are entire screens of nothing but paths to traverse, objectives are often far apart, and the way the screens are laid out in relation to each other can be confusing and unclear. Notwithstanding, the screens themselves are lavishly painted with chunky pixel art that work very well with the ambient sound. It’s well-presented on the whole, and there’s so much of it. But is it any good?

Yes and no. The story is probably the least ambitious thing about it. There’s a power-hungry Sheriff, a mysterious cult, a neighbouring village, and these ends are mostly wrapped up. Some of the characterisation is excellent, but more than a little of it suffers from being a product of its time, especially in terms of how female NPCs are occasionally described by the wargame nerd voice. I like a bit of raunch as much as the next person, but by and large, it just shows the age of this game from inception to basically now.

Quest for Infamy has combat, too. I almost forgot to mention it because it’s more of a bugbear than something that feels central to the game. Simply put, it’s turn-based and heavily reliant on luck; unless you can acquire various tools and tricks through one of the three routes, which is recommended as they add a fair amount of player freedom to the proceedings. Best get knuckling-down with those fetch-quests, then.

But between the combat and the class-specific fluff, the game’s alright. There are some clever and sometimes amusing minigames (a drinking game to initiate the Brigand path legitimately made me giggle) and the usual point ‘n’ click puzzle logic is pretty strong here; most things make sense, and you are most definitely given enough clues to piece together what the game is asking of you. It feels like a ‘big-brain moment’ to solve some of these things, too.

I admit I went into this game based on the premise alone. Being the rogue, the scumbag, the bad guy instead of the quintessential righteous shiny King’s Knight of Virtue, it appealed to me on that alone. But in retrospect, the fact it was all delivered in a genre of game that I’m not strictly into as such, sort of bit me in the butt.

I liked it, but not a lot. And yet I feel like it would be remiss of me not to say, that because of the sheer scale and scope of the world and the number of things to do in it, I respect it.

Quest for Infamy is out now on PS4, Xbox Series/Xbox One, and Switch. It first launched on PC in 2014.