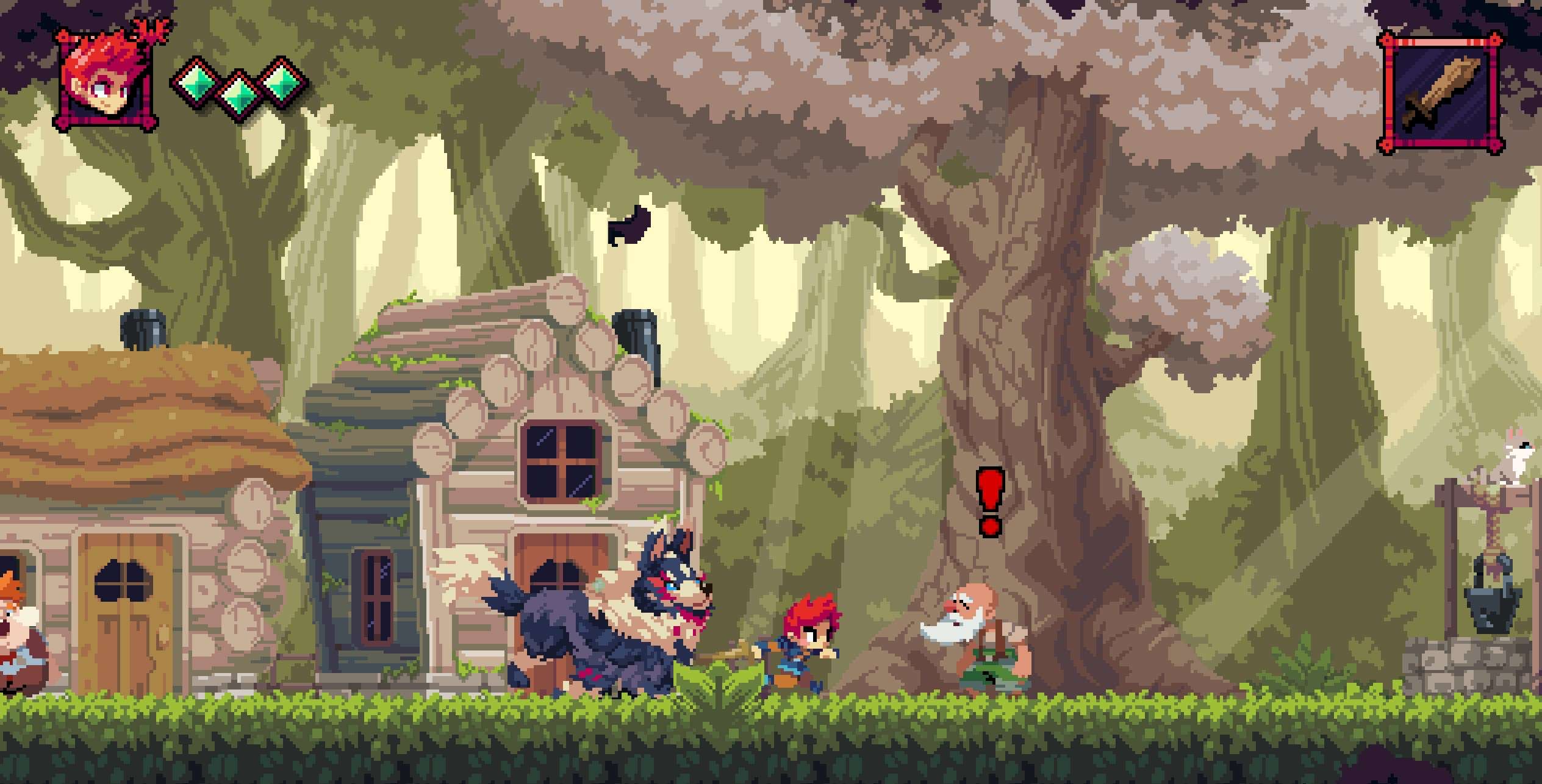 I love video games. Part of that love is the grand feeling of adventure which comes with just escaping into a virtual world and taking in the sights and sounds, perhaps speaking to its inhabitants, or maybe poking some of its monsters with the ouchy-end of a sword. It’s something I’ve enjoyed since being a small child, forever a fan of the Wonder Boy games. The clue’s the name – those things are a wonder or were at least for my younger self. Very rarely lately have I experienced that same wide-eyed amazement at a magical world since those halcyon days.

Enter Flynn: Son of Crimson. This is a magical game very much in the vein of those beloved, wondrous, experiences of my younger days. You play as Flynn, a wondrous boy himself, armed with a sword (and later other weapons); the pointy part of which is utilised to make short work of many a nasty face in the land of Rosantica. And there are many, as a force known as The Scourge threatens an otherwise peaceful and idyllic life in the beautiful land.

And, oh my, is it beautiful. Among the first things you’ll likely notice is that everything looks amazing. Form follows function, of course, as player control is responsive and never feels out of the player’s hands, but nonetheless, Flynn is as lavishly-animated as the world around him; it’s all just such an absolute pleasure at the basic movement level, and that’s before you get to the bit – almost at the start – with the doggo.

Yes, there’s a doggo. Dex is her name and riding her as a mighty and gracious steed is possibly even more fun than the already-amazing basic movement. A shame, then, that for plot reasons – something about Guardian Spirits which of course need to be retrieved – she’s out of action for most of the game. So that basic movement will do, which is no bad thing. Flynn has an initially small selection of slashes with his sword, a basic magic attack, and the usual platform-adventure stable of ladder-climbing, jumping, and occasionally pushing a block to wherever the puzzle designer wants you to put it. Yes, puzzles – they’re not obtrusive, and add some variety to the proceedings, changing pace as and when it feels needed. And it is, at times, because of the combat.

There had to be a chink in this wondrous boy’s armour, right? And combat is pretty much it. There’s nothing wrong with the combat per se – there’s a nice selection of moves with different utility, and the ability to dodge some very well-telegraphed enemy attacks, it’s all actually as superbly done as the rest of the game. Which is probably why it goes on for so long, maybe? I found myself getting very comfortable with a certain rhythm of slash-slash-dodge, slash-slash-dodge, repeat, as I continually blindsided foes and attacked from the rear – enemy HP tends toward the longer side, meaning that combat encounters felt more grindy than perhaps they ought to have.

Some enemies are, of course, designed with attacks that cover their rear, so in this case, alternate tactics are required (for example, using magic to stun an enemy to guarantee some safe damage), usually taking more time to employ. Grind, grind, grind.

And ‘grind’ is pretty much the name of the one, single, isolated complaint I have about this game. Although it permeates into multiple areas, usually offsetting and mitigating what would otherwise be a pleasant quality-of-life addition for the player. Flynn gets the ability to heal himself at the cost of some magic; but boss fights, although well-designed, are arduous endurance tests of pattern recognition and dodging until the optimal moment to let off some attacks. Flynn earns a Crimson power that will maximise his damage output, but this power is also used for many of the unlockable moves he can get back in the village of Sanctia, only they cost a fair amount of crimson gems, found in the game’s stages. And so on, and so forth.

It even sees certain stages repeated in the story’s various Scourge attacks, in which an already-beaten stage is repopulated with tougher enemies and recoloured purple, and you’re locked out of progressing further in the game until you clear it. Even then, there’s a quick track over the world map to get back to where you were before that happened so you can continue the story. For every couple of steps forward, there’s a step back in this regard.

After reading that the game was originally intended to have a more Metroidvania-esque progression instead of its eventual Super Mario World-style overworld map, it’s almost like the designers felt like they had to pad the game a little more as an apology for having to downsize from their original vision. I feel almost nit-picky for citing this one complaint, but it permeates into most other aspects of the game; enough to have me feeling burned-out after every boss encounter and having to put the game down for a while before returning, alas.

But is it worth your time? The endgame levels really are where an already-fun game starts to shine and contain some of the most fun and challenging segments found in the whole experience. And then, no spoilers, it kind of ends with a whimper. So it is, on the whole, a game worth playing – this is one case where the journey is of more value and worth than the destination. This is a great game, a truly beautiful experience from start to finish. And with a little less padding, a little less grind, and a little more of being able to experience the whole thing on my own terms, this could’ve been one of my favourite games ever, right up there with Wonder Boy himself.

Flynn: Son of Crimson launched last September on PS4, Xbox One, Switch and Steam. Humble Games politely asked us to take a belated look, so here we are.