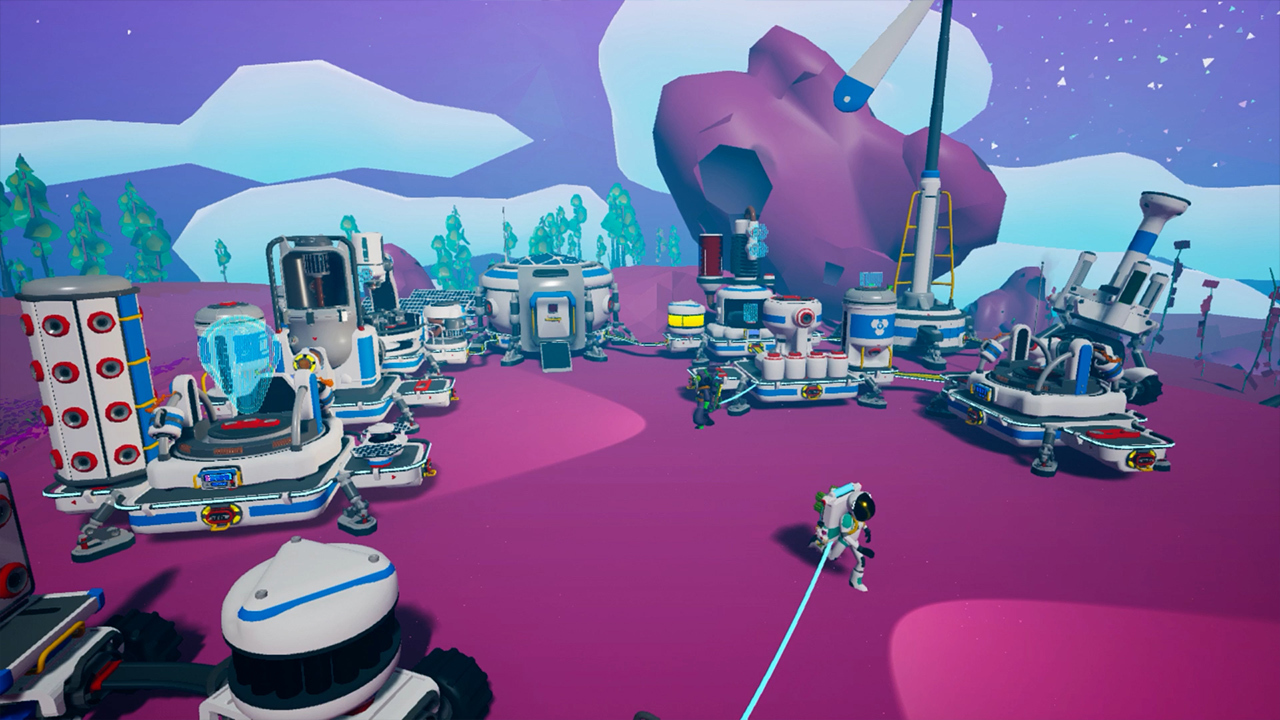 Most of this week’s Switch games are belated conversions. They aren’t exactly well-known titles, however, which makes for an intriguing week of hidden gems and forgotten classics.

Coming as a complete surprise, the Switch gains one of the NeoGeo Pocket Color’s best titles – SNK vs. Capcom: Card Fighters Clash. The 1999 original was sold in two versions, a la Pokémon. This re-release combines the content of both card battlers to create a definitive version. It’s possible to switch between the Japanese and English versions too. £7.19 seems like a steal.

If you dabbled in the Xbox 360 import scene, you likely caught wind of 2011’s ESCHATOS. This Japan-only vertical shooter was region-free, making it a tempting proposition. Then there’s Radirgy Swag, the history of which can be traced back to an incredibly late (2006!) Dreamcast release. This too is a vertical shooter, only with a Japanese pop culture theme and the ability to use a sword instead of projectile weapons. It appears to be due a physical release in the US soon.

Sci-fi exploration ASTRONEER dates back to 2016, meanwhile. Indeed, this Switch version has been a long time coming. It’s a co-op base builder with ground deformation and other fancy tech, offering seven vast planets to explore. Reviews for the Switch version are yet to surface. Scores for the PC and Xbox One versions mostly clocked in at 7/10, though, resulting in a 73% Metacritic.

Fellow outpost builder Nova-111 is older still, even gracing the likes of Wii U and PS Vita back in 2015. Video Chums gave this Switch iteration a going over. “Nova-111 is quite a treat of an indie and I’m happy that it’s finally available for Switch. Exploring its alien worlds as you outsmart all sorts of tricky foes and progress past seemingly impossible situations makes for some rewarding Mystery Dungeon-like gameplay,” they said.

Explore and Reshape Distant Worlds! Astroneer is set during the 25th century Intergalactic Age of Discovery, where Astroneers explore the frontiers of outer space, risking their lives in harsh environments to unearth rare discoveries and unlock the mysteries of the universe.

On this adventure, players can work together to build custom bases above or below ground, create vehicles to explore a vast solar system, and use terrain to create anything they can imagine.

Immerse into the fantastical world of imagination.

In Aery – Dreamscape you play as a bird-like spirit who can enter the minds of other people in order to explore their thoughts, their secrets, and their imagination.

Each person has their own imaginary world and each world represents the thoughts, fears, and ambitions of that person in an interesting and mostly abstract way.

Within an imaginary world, you have to find a certain amount of memory shards to advance with the story and to get to know more about the person in question. Once you have found all memory shards you are free to leave the world again and search for the next mind you want to explore.

Therefore every single imagination world acts as its own small story with its very own theme, design elements, and obstacles.

Experience the feeling of flying, immerse into beautiful and atmospheric landscapes and enjoy the unique storytelling of the game while getting to know a lot of interesting people on the way.

As you journey through the dreadful and corrupted Tower of Babel, you’ll uncover its many dangerous secrets, challenge powerful lords and slay hordes of their minions. Immerse yourself in fluid real-time combat that’s easy to learn but challenging to master. Gain access to new areas in and around the tower as you progress and upgrade abilities. But what end could await one filled with such anger and despair?

Enjoy this racing game that’s easy to pick up and fun for the whole family!

Pass around the Joy-Con and compete with up to four players!

Featuring a variety of racing vehicles!

Choose from cars, bikes, trucks, and even tanks!

This is a side-scrolling tower defense game where you lead your units from your own castle towards the Princess’ castle and capture it.

There are roguelite elements that lets you enjoy building new decks each time you play the story mode.

Upon entering this dimension many years ago, magicdweedoo has proven to be relentless in his development and delivery of otherworldly multimedia experiences. dweeMIXED: Thwee Pack, a collection of remastered underground indie gaming staples, provides an essential guide to this labyrinthine mind.

Each segment of the stage is quick, making the game fast-paced and exhilarating. Frequent transitions from attack to rest and back progress the game with rhythm.

No gaps between stages and no data loading wait times – allowing you to play non-stop from beginning to end.

Traditional effects with Sci-Fi theme creates an orthodox world filled with design and characters having a nostalgic feel.

Inspired by classic action JRPGs, Eternal Radiance is an action role-playing game about a squire named Celeste who begins a journey to prove herself worthy of becoming a true knight. Her quest takes her far from her home, across the continent in pursuit of a thief whose actions stem from a sinister plot.

Headland is a fantastical imaginary world filled with vibrant colors and silly creatures. But a sinister outside force threatens to steal the wonder and color from the world. Join Nor on an action-filled adventure, help him rebuild the Imagination Core, and save Headland!

hocus. is continues. This time everything is dynamic. It has new mechanics and illusion combinations with so many creative solving possibilities.

A teenager with the ability to relive the death of any corpse he touches finds himself tangled in another murder case when the owner of a high profile corporation dies under mysterious circumstances.

This time, however, he’s forced to team up with a group of kids with abilities as strange as his own. Unfortunately, these new teammates might be more dangerous than the killer they’re hunting.

Everyone has something to hide, and the past never stays hidden for long. Interrogate suspects, explore the house of the wealthy deceased, and unearth the secrets of others while you try to keep your own hidden.

Pilot your trusty vessel through mysterious and foreign planets in this award-winning sci-fi-themed turn-based adventure with a real-time action twist. Your mission: fix space-time and search out the scientists lost in the aftermath of the Universe’s greatest experiment. Aided only by your trusty (if somewhat sandwich-obsessed) guide, you must repair the temporal vortex!

Activate 100% of your brain and solve mind-warping puzzles! Engage in strategic battles with bizarre astrobiological creatures in a twisted environment where the turn-based world and the real-time world collide.

Progress through three beautiful, distinct worlds! Protect yourself by collecting new abilities and upgrading modules for your ship. Whatever you do though, never forget that your greatest weapon is always SCIENCE itself!

This is a new kind of battle game that combines a game battle with a fighting game.

The basic rule of the game is to get a higher score than your opponent, but you can enjoy the game without any rules.

You can attack your opponent while he’s playing, or interrupt him by stealing his controller and making a deliberate mistake!

Five types of games are included!

Radirgy Swag is a unique shooter with game mechanics that can be enjoyed by players of all different levels. The planes in Radirgy Swag are not only equipped with guns, but you can also destroy enemies with your sword. This feature allows you to attack your enemies from different angles. Use your shield or fill up your Absonet gauge to give you temporary invincibility against your foes. Master both offensive and defensive techniques to conquer your mission.

Test yourself at the firing range shooting different types of rifles competing with a stopwatch. Different levels and targets are waiting for you. Ready? Some tips for you. Use proper gun for each situation. When you’re getting ready to fire, hold your breath. Squeeze the trigger softly.Use a solid rest to improve accuracy. Don’t forget to reload. It’s your time. Good luck!

Help your team grow efficiently and work out the best strategy to win the world championship title!

Sudoku Zenkai is a game for beginners and advanced Sudoku players.

It lets you play cooperatively with your friends! You can start a new puzzle with a friend or simply ask one to help you on that tricky one, two heads are always better than one (usually).

Train your brain, logic and perception skills with Sudoku Zenkai puzzles in six different difficulties so that you can start on trainee levels to exercise your logical thinking and memory, or just jump to the insane levels to give your mind a real workout.