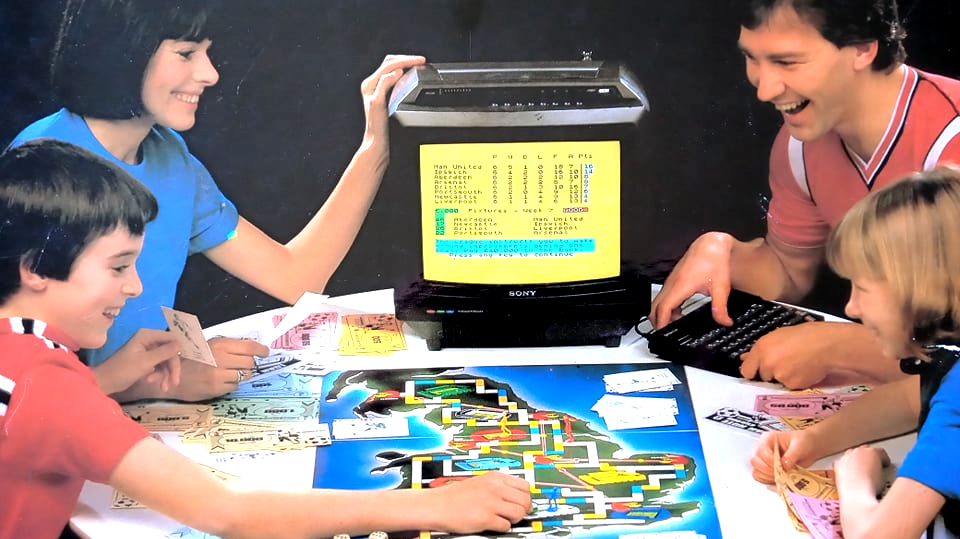 Search for the 1985 football sim Bryan Robson’s Super League on Goggle and you’ll be presented with just two results – a profile page on Spectrum Computing and an entry on Games That Weren’t.

It’s a game considered ‘missing in action’ – very little is documented about its existence, to the point where even developer Paul Lamond Games is unsure whether the C64 version was released, leaving just the ZX Spectrum version as a certainty. Both iterations were reviewed and scored poorly, and neither has been preserved online.

Poor sales can’t be attributed to the negative critical consensus alone. Super League wasn’t your typical computer game – it was an interactive board game, packaged in a large shelf-hogging box. After laying out the board and pieces, and loading the game on your computer, the idea was to build up a football team and travel around the UK playing matches and making deals. Innovative for 1985.

As mentioned on Games That Weren’t, when it came to displaying Super League in stores, retailers were seemingly left to decide whether to display it in the computer section or the board game/toy department. Arguably, this was more damaging to sales than the poor reviews.

The final nail in the game’s coffin was its price. Spectrum Computing notes a £12.95 price tag, which is presumably a figure quoted in reviews. This made it a premium product; not something that could have been readily purchased with pocket money.

Information online is scarce, to the point where I couldn’t even find an image of the box. Google Image Search brings up a single screenshot from a magazine scan, and there are no completed listings on eBay.

You can imagine my surprise, then, to come across a copy of Bryan Robson’s Super League while trawling the charity shops. I was oblivious to its existence prior, and after a quick online search, I soon concluded that it’s quite the rarity.

As much as I’d like to preserve it online, this story isn’t good news. What I have in my possession is an incomplete package. While I have the box, the board and its pieces, the cassette – a vital component – is sadly missing. Gutted isn’t the word. I’m not even sure what version I have here – the box simply notes it can be played on either C64 or ZX Spectrum, adding another layer of mystery.

If you own a copy of Bryan Robson’s Super League – or are perhaps fortunate enough to also discover a copy in the wild – bear in mind its current ‘lost game’ status, as I’m sure others would like to play it.

Hopefully, these photos provide a better look at the experience it offered, filing in some of the blanks in the game’s tragic history.