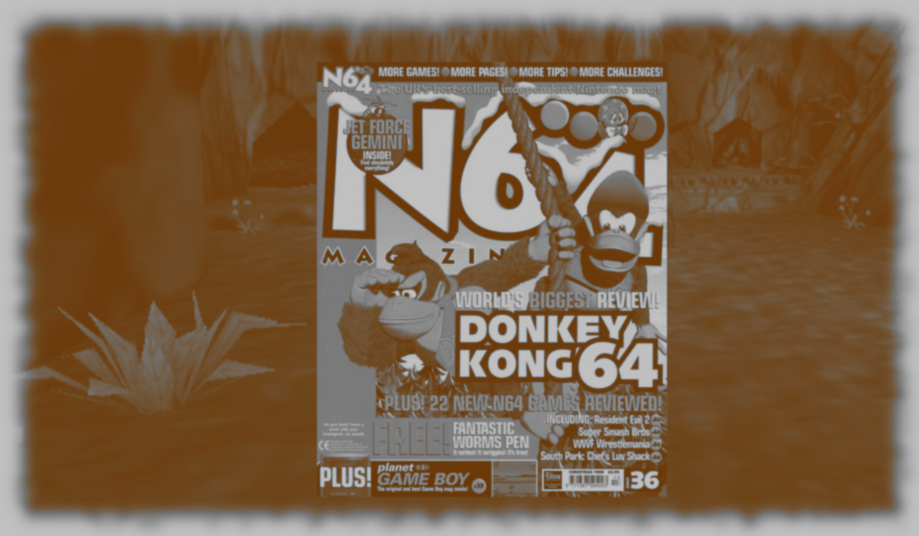 By 1999 the majority of publishers had long decided whether to support the Nintendo 64 or stick with the PlayStation and PC. Helping to mitigate the risk of a flop – the N64 was one of the most expensive consoles to develop for – the publishers that backed the system tended to save their releases for the big winter period, resulting in a glut of new games every winter.

This played havoc with the N64’s notoriously sporadic release schedule. For much of its life, the cartridge-based console saw an average of just six releases per month. For comparison, the PlayStation – and later the PlayStation 2 – routinely saw between 15-20 new releases a month in their prime, climbing to 25-30 titles during busier times. Sure, it was a case of quantity over quality. But this still left the Nintendo magazines of the era in a predicament, skirting around the unpredictable supply of new releases by filling their pages with features, strategy guides, and more.

N64 Magazine, a continuation of the almighty Super Play, had made their niche by extensively covering imports. It wasn’t uncommon to see a Japanese version of a game reviewed one month, followed by the UK/PAL version a few months later. The majority of N64 magazines also welcomed the GBC, and later the GBA, into their fold with ‘pull out’ style handheld sections.

With all this in mind, the Christmas 1999 issue of N64 Magazine stands out. A resounding twenty-two new releases were reviewed – an amount never topped during the magazine’s run, which spanned the entire lifecycle of the N64. For another comparison, this issue featured roughly four issue’s worth of content in one fell swoop.

Not even Nintendo themselves were prepared for this software deluge, as claims of a bottleneck at their cartridge production facility were reported the following month. That’s to say, Nintendo never expected quite so many games to hit the N64 at once. This led to a handful of titles missing the lucrative run-up to Christmas, with one named casualty being Worms Armageddon.

Funnily enough, a Worms pen was mounted to the cover of issue #36, images of which have seemingly been lost to time. Indeed, it’s not hard to imagine it being thrown away the moment the ink ran out. Bearing a bright pink tip, it was filled with transparent fluid that contained zig-zag ‘worms’ which floated around when shaken. A tad more exciting than a ballpoint with the Worms logo slapped on.

The majority of games reviewed in issue #36 scored surprisingly highly, with even a couple of titles from the notorious Titus Interactive gaining praise. It truly was a Christmas miracle!

Rare’s Donkey Kong 64 led the way, following in the footsteps of Banjo-Kazooie and Jet Force Gemini. Easily the biggest release of the winter season, where it was up against Tomb Raider: The Last Revelation on the PSone and Sonic Adventure on the newly released Dreamcast, the collect-a-thon walked away with an impressive 93%, showcasing Rare’s utter mastery of the system.

As an example of N64 Magazine covering imports months in advance, Super Smash Bros. was put through its paces way back in issue #26. Ten issues later, the PAL version of the platform brawler had finally arrived. As noted, Japan received it in January, America in July, and finally, in December it was Europe’s turn. Huge delays between regions weren’t uncommon at the time, no matter the format – something hard to imagine happening nowadays.

Super Smash Bros. was heralded as the N64’s best beat ’em up and praised for its originality. If you wanted something more traditional though, the team recommended Fighters Destiny instead.

Wrestling games had become incredibly popular on the N64, especially in the US. This year, EA had entered the fray with WCW Mayhem. It was an admirable enough debut, earning a 78% review score. Not as impressive as other N64 wrestling sims, and a bit lacking in single player, but decent in multiplayer. Quite a speedy game too, with lightning fast punches and slams. It was up against THQ’s WWF Wrestlemania 2000, which scored a lofty 90% in the same issue, earning itself an elusive ‘Star Game’ badge – an accolade only dished out to the N64’s finest.

Missing out on an ideal Halloween launch, Resident Evil 2 hit N64 on 3rd December. It was a technical accomplishment – this was a game many expected to never see due to cartridge restrictions. Hurrah for breakthroughs in compression technology, eh? “There’s not all that much to Resident Evil 2 – the main game will only take a few hours to complete,” noted reviewer Mark Green. “But what there is will hook you imminently and completely.”

It gained a 90% review score, including 9/10s for both visuals and sound. Only 8/10 for system mastery though, despite featuring all FMV sequences and two CDs worth of content on a single cart.

Two other games synonymous with the PlayStation also made their mark on N64 this month. Clearly hoping to repeat the success of the surprisingly great (and still underrated) WipEout 64 were Road Rash 64 and Destruction Derby 64. These were given single page reviews, both arriving to a lukewarm reception – 69% for Road Rash, and 65% for Destruction Derby. The smash ‘n’ crash racer, published by THQ, was billed as slow and boring, as well as being a bit old hat. As a PlayStation launch title, it was fine, but in 1999 – some four years later – it looked tired. Road Rash (also from THQ) had a slight whiff of ‘first-gen N64 game’ about it, only offering limited fun.

Those aforementioned Titus games were Roadsters – a marked improvement on Automobili Lamborghini, later released on Dreamcast – which scored 80% thanks to its blistering speed, a wealth of sports cars, and solid multiplayer mode. It wasn’t quite as good as World Driver Champion though, which the team referred to as the N64’s very own Gran Turismo. How many would agree with that statement, even in 1999, is debatable. Xena Warrior Princess garnered 81% despite the single-player mode taking all of fifteen minutes to complete. It was the multiplayer mode that saved this TV tie-in, allegedly being fast, frantic, and tactical.

It wasn’t all good news for Titus though. Carmageddon 64, widely regarded as one of the worst games of all time, appropriately scored a miserable 8% in this Christmas issue. Hopefully, there was plenty of time to scrub it off Christmas lists. This became one of the magazine’s most famous reviews, a humorously written breakdown of just how broken it was – it paints a surprisingly clear picture of its ineptness. A game so broken, it was close to impossible to complete.

Gex: Deep Cover Gecko didn’t fare well either, awarded a mere 2/10 for visual prowess due to “unwatchable jerky” graphics. The horrible framerate killed this 3D platformer dead, with the only positive being that the cart could be used to prop up a wobbly table. Score? A poor 22%.

One game widely known today for being on the rubbish side is South Park: Chef’s Love Shack – a hastily cobbled collection of 2D mini-games, pushed out the door before South Park’s popularity waned. It scored badly on PSone and Dreamcast. N64 Magazine, surprisingly enough, found much to enjoy – it garnered a six-page(!) review, and an 83% review score. Perhaps on N64, where four joypad ports came as standard, there was a bit more multiplayer magic here.

Worms Armageddon was another multiplayer classic, earning itself 85% and a place alongside GoldenEye 64 and Mario Kart 64 on N64 game nights. It bagged a 9/10 for lifespan but only 5/10 for system mastery due to its tiny 2D visuals.

The team could only muster 62% for the short-lived Paperboy (also known as Paperboy 64), comparing the 1950’s cartoon aesthetic to Ren & Stimpy. Oh, we always saw it as low-poly jank. Midway fared better with Gauntlet Legends, which really came alive in four-player mode. A bit ugly, but full of old skool action. It missed out on a ‘Star Game’ badge but was awarded 81% nonetheless.

Ubisoft is known today for putting out multiple, largely similar, open-world adventures once a year. In 1999, they had a similar run of 3D platformers with Tonic Trouble, Rayman 2 and Rocket: Robot on Wheels released just months apart. Tonic Trouble was, interestingly, merely intended to be a testbed for Rayman 2’s tech – hence the similarities. Rocket: Robot on Wheels couldn’t be any more different – this underrated gem was an early outing for Sucker Punch, now of PlayStation first-party fame. A creative and fun platformer, N64 Magazine claimed that it was very close to Banjo-Kazooie in terms of quality. This “top hole” performance was given 88% – remarkable for a studio’s first attempt on tricky to develop for platform.

EDGE magazine skipped over reviewing Rocket: Robot on Wheels, but later regretted doing so, giving it a shoutout during a ‘most played’ section instead while noting the lack of promotion it received.

LEGO Racers is something of a hidden N64 gem too. Not an outright classic, but the create-a-car tool was well implemented. We doubt anyone who received it for Christmas was disappointed.

The team managed to cram in an import review too – Treasure’s much loved Bakuretsu Muteki Bangaio (aka Bangai-O) saw a single page review, resulting in an impressive 84%. “Very few publishers have got the bottle to release a game like this these days – ESP shipped a limited edition of 10,000 in Japan, and there are currently no plans to bring it out over here.”

Of course, the magazine ran all the usual features amongst the deluge of reviews. South Park Rally and ISS Millennium had the preview treatment, the Japanese launch of the 64DD was covered in the news section, the Planet Game Boy ‘pull out’ praised Mario Golf, while Jet Force Gemini was torn apart in an exhaustive guide.

Then in the letters page, the team had a dig at Sonic Adventure (“Nice to look at but vacuous”) while readers reported sightings of dubious plug ‘n play devices shaped like N64 controllers. There seems to be some confusion, however, incorrectly claiming that they contained SNES classics, rather than NES games. Whoops!

For an added dollop of seasonal cheer, the team chalked up extracts from six faux ‘Thrills & Swoon’ romance novels. Reading recommendation: snuggled up with a big chair with a cup of cocoa. These included Caught Between Two Brothers and The Spy Who Came In From The Cold and Loved Her.

Enough to bring a tear to anyone’s GoldenEye…