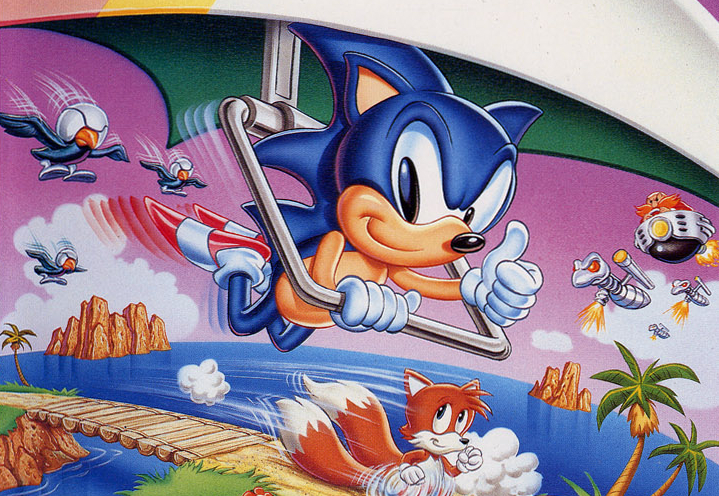 Like countless children across the globe in 1992, I woke on Christmas Day morning to find a copy of Sonic the Hedgehog 2 – arguably the biggest game of the year – under the tree. It wasn’t the all-singing Mega Drive version, however, but rather the 8-bit Master System iteration. No, this wasn’t a mistake on my parents’ behalf. It wasn’t until the following Christmas that I caught up with the 16-bit race, sticking with the humble Master System throughout 1993.

The gaming press had waxed lyrical about the Mega Drive version of Sonic the Hedgehog 2 long before its 24th November release date, putting Sonic and his new chum Tails on front covers and promising that Sonic 2 will be the biggest, most impressive, Mega Drive game so far. The Master System (and Game Gear) versions received nowhere near as much coverage – one magazine gave it just a small boxout with a couple of screenshots. The fact that it featured hang gliding and an underground mine cart stage was about as much as they, or possibly SEGA themselves, divulged.

Play 8-bit Sonic 2, and you’ll find the differences from its predecessor are immediately obvious. The bright and vibrant, now iconic, Green Hill Zone opening stage was replaced with the darker more danger-filled Under Ground Zone and there’s a bigger focus on using contraptions to get around. Dr. Robotnik also steps aside during boss battles to let his army of animal robots go head-to-head with Sonic, with the first boss – a red crab-like creature – being surprisingly tricky due to their hard-to-predict bouncing ball attack. Other than this though, it’s very similar to the original, if a little inconsistent in difficulty.

Even so, eleven-year-old me was in my element on Christmas Day. In my hands was a brand-new Sonic adventure to explore and complete, destined to become an obsession. Finishing the first Sonic on Master System with all six chaos emeralds was one of my proudest accomplishments.

But my appreciation for 8-bit Sonic 2 soon waned. Trying out the Mega Drive version on a store demo pod was the catalyst. I didn’t expect the two to compare visually, but 16-bit Sonic 2 had a lot more to offer. The spin-dash move, two-player support, longer stages with more loops and corkscrews, excellent music, and the fact that Tails follows behind Sonic in an attempt to help out all made the 8-bit version look considerably weaker.

Tails’s inclusion in 8-bit Sonic 2 is negligible in comparison – he’s there to be rescued, a mere paper-thin plot device. It left me thinking this highly acclaimed sequel didn’t deserve a ‘Sega Pro Yo!’ after all, and that the original was the better game. After seeing the ending credits roll, partway through January if memory serves, I was hesitant to return. Sonic 1 filled me with joy. Turning on Sonic 2 and being greeted by the first stage’s bleak colour scheme had the opposite effect.

Less than a year later, developer Aspect corrected all of 8-bit Sonic 2’s wrongdoings with Sonic Chaos. This is the game Sonic 2 should’ve been. The visuals were significantly improved, Tails was a playable character, both Sonic and Tails could spin-dash, and the levels were multi-layered which made them far closer to a typical Mega Drive stage. That’s to say, stages now had ‘top’ and ‘bottom’ routes allowing for experimentation when it came to beating level times.

On top of all this, Sonic could also put on rocket shoes and zip around, making for a faster experience.  Aspect even managed to implement twirly mobius strips – something once deemed impossible on 8-bit hardware.

Unfortunately, this all came at a colossal, deal-breaking cost. Sonic Chaos was stupidly easy. Presumably, SEGA believed the Master System user-base was now primarily young children – by 1993, the Mega Drive was three years old and becoming cheaper all the time – and so Sonic Chaos’s difficulty was seemingly tailored to suit inexperienced gamers. This isn’t a mere modern-day observation, I should note. A friend received Sonic Chaos as a birthday present, and upon playing it for the first time, we jointly managed to reach the penultimate stage on our first attempt. Most levels lasted a mere 30 seconds, with such items as the aforementioned rocket shoes allowing huge chunks to be skipped by flying along the top of the screen. It was a faster, and consequently more impressive game, but a far shorter and easier experience as a result.

One step forward, one step back. Sonic Chaos simply brought its own problems to the table. Sonic the Hedgehog: Triple Trouble on Game Gear saw Aspect finally perfect the 8-bit Sonic formula, creating something based on the strengths of the handheld. It’s a shame it never made it to the Master System as it would’ve made a much more pleasurable swansong for Sonic than 1994’s shoddy Sonic Spinball. It was clear by this point that the Master System market was a mere afterthought for SEGA, gaining little more than hand-me-downs.

I will likely never forget playing Sonic the Hedgehog 2 for the first time on Christmas Day. Slotting the cartridge into the system, seeing the new title screen and witnessing the introduction of Tails, before finally beating that pathetic first boss after several failed attempts. Or maybe it was more to do with finally owning the biggest release of the year; good old consumerism. The older I get, the more I feel that was the case, and maybe – just maybe – Sonic the Hedgehog 2 on Master System wasn’t any good to begin with. Bah humbug.