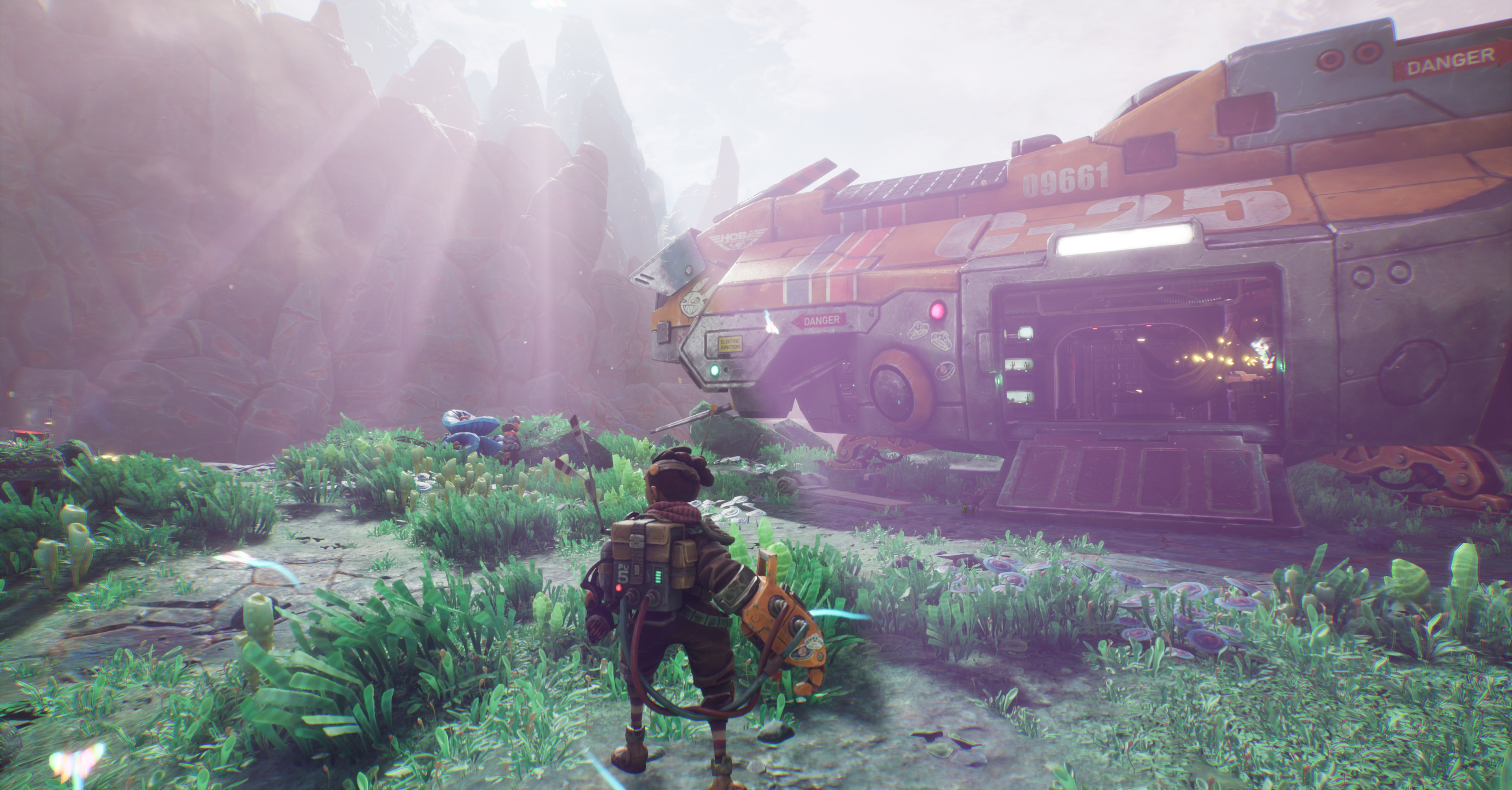 Xbox Game Pass has left such an impact on the gaming landscape that we’re starting to see bespoke experiences tailored specially for the service. These tend to be short, narrative-driven, affairs with family-friendly themes – snackable games, if you will. The Gunk is the latest, coming from Image & Form – a studio known to have an affiliation with Nintendo.

The tech on show is moderately impressive – colossal blobs of throbbing gunk swirl into Rani’s device, leaving no trace behind. The overgrown environments are visually appealing too, bearing a ‘ruined beauty’ ethos. The number of loading screens and some waxy-looking textures did however leave us wondering if this was conceived as a Switch (or maybe even a Switch Pro) title originally.

As Rani sets about reversing the corruption, restoring nature’s balance in the process, the planet’s secrets come to light. Thankfully, she isn’t alone in her struggle. Rani’s doting partner Beccy sets up a campsite on a quiet ridge, which acts as a hub. It’s here the Power Glove can be upgraded, requiring precious resources, while a beacon allows for quick travel to past locations. Rani’s determination to uncover the gunk’s origin sees their relationship tested, and this extra layer of narration helps to offset the lulls within with storyline.

Cleaning up the gunk sees nature return to the area, spawning giant mushrooms and other fungi. These are then used to reach higher areas and cross chasms, with a focus on following a pipeline Rani becomes fascinated by. It must lead somewhere, right?

The Power Glove can be used to grab and throw spherical seedpods too, one type of which explodes – useful for clearing rubble. Rani can’t jump while carrying pods, which leads to situations where you need to find ways to transport them around. The opportunity was here to introduce all kinds of different pods with various effects, but it seems the team choose to gradually introduce larger environments instead. Failing to run with ideas fully is something of a recurring theme.

Occasionally the gunk spawns creatures, giving the Power Glove an all-new purpose. These encounters are used sparingly, keeping the focus on traversal, puzzle-solving and gunk clearing. Even so, the lack of enemy types – limited to just three, much like the seedpods – means once you’ve learned the best way to dispatch foes, the same technics can be applied ad nauseum. New upgrades and abilities should have helped keep things fresh, but instead highlight a lack of unique mechanics.

The linear structure of the five key locations makes for a relatively straightforward experience, which in turn makes The Gunk feel considerably uncomplicated – even younger gamers shouldn’t struggle with the lack of signposting and prompts, as one location usually leads straight to the next. This also leads to a slight lack of engagement, however – it isn’t until the final chapter that environments need to be scouted fully for the means to progress. In fact, the biggest challenge present is locating every scannable item – Rani compiles a database of alien life while touring the planet.

The Gunk represents new territory for Image & Form’s SteamWorld team, and not just the change of host platform – this is their first foray into 3D. With a runtime of around 6 hours, it retains the condensed nature of their previous games, but some concessions were clearly made. We expected a small but perfectly formed package, with little bloat or filler, but instead found something light on surprises and all too fleeting. Outside of eventually making environments multi-layered and larger, core mechanics aren’t expanded upon or added to, mostly evident by the fact that ideas introduced during the opening chapter are still commonplace as the story nears its conclusion.

This is a game conceived with a single purpose in mind – to deliver a fun and meaningful experience most gamers will be able to finish in an afternoon or two, no matter their gaming prowess. It makes good on that promise, but it doesn’t go much beyond that, failing to exceed expectations set by the likes of SteamWorld Dig 2. Guilty of playing things a little too safe, perhaps.

We hoped for a gooey treat, but what we got was a light snack. A bit like going to the cupboard hoping to find a Wagon Wheel, only to find all that’s left are a couple of bourbons. Snackable games, eh?

The Gunk is out now on Xbox One, Xbox Series, and PC.