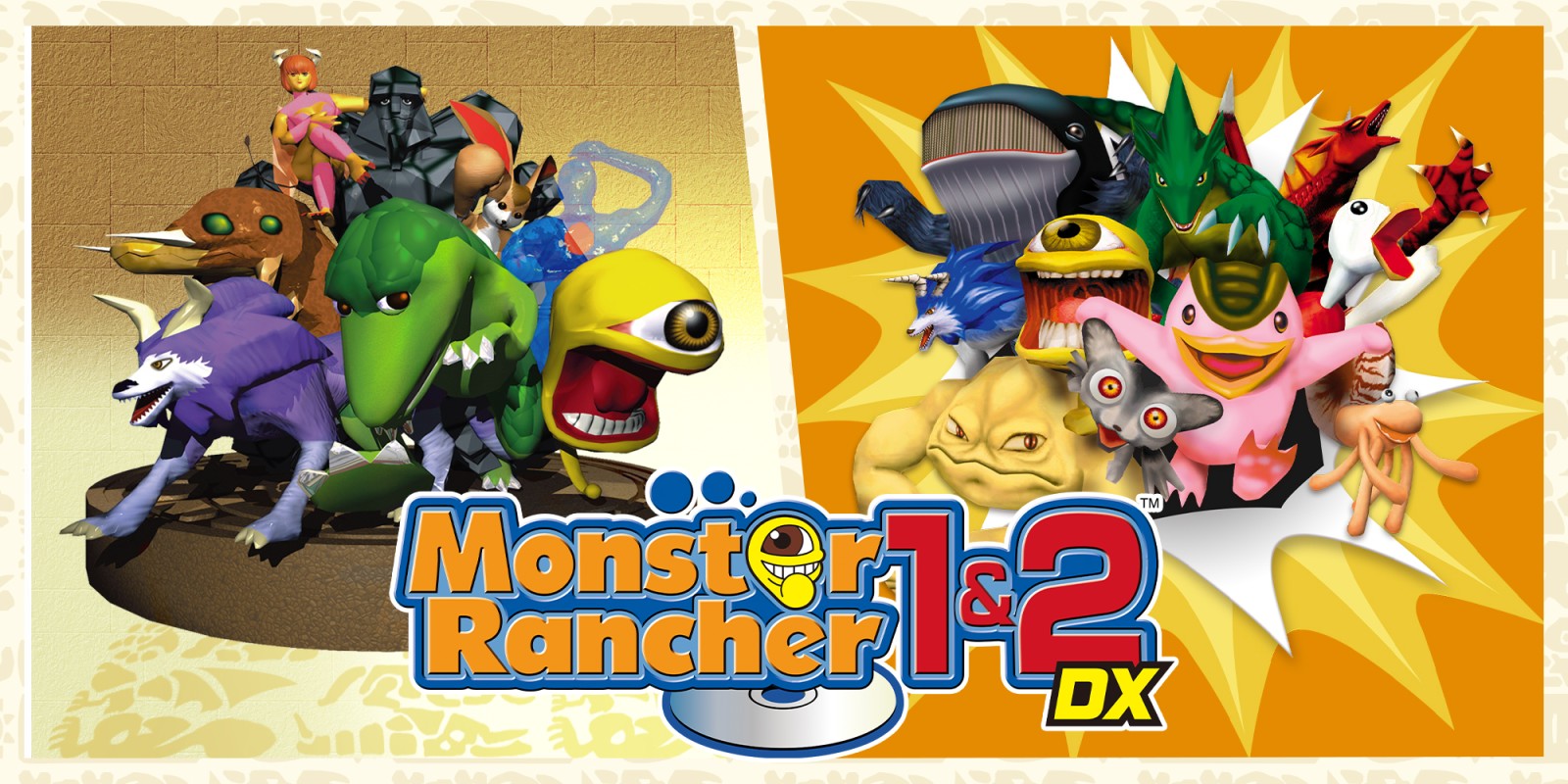 It’s a case of quality over quantity for this week’s Switch eShop round-up. Fewer games than we usually see on the service, but plenty to entice.

Monster Rancher 1 & 2 DX may become a surprisingly strong seller – it’s reviewing well, with scores including 4.5/5 from Digitally Downloaded and 4/5 from The Gamer, plus we haven’t seen a new Monster Rancher in quite some time. It’s something of a cult series; a monster breeding/battler hybrid that was reasonably big on PSone when ‘Pokémon mania’ first hit.

Sam & Max: Beyond Time and Space is a re-release likewise, this time being a remastered version of Telltale’s second season of episodic Sam & Max games. It’s handled by the original team, and the £15.49 asking price seems reasonable enough.

Then there’s Transient: Extended Edition, a combination of H.P. Lovecraft’s cosmic existentialism and a dystopian cyberpunk setting. This sci-fi adventure features a mix of gameplay styles and is going down well on Xbox One – TheXboxHub awarded it 4/5.

The Switch also gets the indie darling Loop Hero. This top-down rogue-like was a sleeper hit on PC – it launched to a waft of 8s and 9s, resulting in an 82% Metacritic. “Loop Hero is a dense and dangerous journey that puts you in full control, merging deck building and the rogue-like genre brilliantly. With tons of options to choose from, and lots of surprises along the way, it would be a mistake to miss out on Four Quarters’ wonderful indie title,” said God is a Geek back in March.

The full list of new releases – including Ubisoft’s Monopoly Madness, and a new Wii U release (oddly enough) – can be found below. Cel-shaded shooter RICO London and the real-time thriller Twelve Minutes might be out by the end of the week too. They’re showing on release lists, but not yet live.

Sam & Max: Beyond Time and Space is a remastered version of Telltale’s second season of episodic Sam & Max games, lovingly updated by a small team of the original developers. Sam is a six-foot canine detective with a nose for justice. Max is a hyperkinetic rabbity-thing with a taste for mayhem. Together, they’re the Freelance Police—an irreverent comedy duo whose esoteric crime-fighting style has been entertaining comic book and video game fans for more than thirty years.

In this five-episode collection of interconnected cases, Sam & Max are back on the crime beat in a showdown with Santa Claus, a race to subdue a giant volcano, and a faceoff with a Eurotrash vampire. And then things get even weirder.

From the creators of CONARIUM and the DARKNESS WITHIN series, comes TRANSIENT, a Lovecraftian Cyberpunk thriller.

In the distant, post-apocalyptic future, what is left of mankind lives in an enclosed citadel created to survive the harsh outside environment. Delve deep into this dystopian world and investigate what is happening to you and your friends. Solve puzzles, hack systems and plug in to explore other dimensions. Discover a truth that might tear apart your sanity and question your very existence.

Experience TRANSIENT like never before in the Extended Edition. Go beyond what you know with additional gameplay, a brand-new ending and an assortment of quality of life improvements.

“The Only Thing That Is Constant Is Change” ― Heraclitus

A role-playing game in which you travel through various settings to rescue the princess from an evil dragon.

Stripping away modern complexities to return to a simpler, more challenging style of gaming, Ball laB is a straightforward precision platformer presented in minimalistic greyscale pixel art graphics. Each puzzling stage fills a single screen, with the objective being to get from one end of the level to another without falling victim to spikes, pitfalls or other hazards.

You play as a ball. You can roll along flat surfaces, bounce to ledges, hop onto platforms or ride elevators to reach your goal. If you hit a hazard, you’ll instantly respawn at the beginning of the stage, adding to your death counter with each attempt. How many tries will it take for you to clear all 60 challenges?

LOVE 3 is a precision platformer where you control fiveEight, a lone survivor searching for others in a mechanical, apocalyptic world. Face challenging obstacles, discover hidden secrets, and try to find hope within the hopeless as you overcome each new danger.

What you find as you explore will influence the end, so make sure you find what’s important.

Ever Forward is an adventure puzzle game — it is the story of Maya. Maya is lost in a strange world somewhere between reality and imagination. She is alone to confront her despair on her journey of discovery, where she must unlock her memories and confront her fears to unravel the secrets of the world. Players will need to use their observational skills and intelligence to solve multiple puzzles to piece together the mystery of Maya’s past and what dark secrets she has buried.

Summon powerful monsters left and right. Turn the tide with countless draws. Rush Duels aren’t over until the very last card is played!

A long time ago, the star people of the Sun City Pyrmia made sure that nothing would go wrong with the sun. But then they disappeared, and whatever happened remains a mystery. Many centuries later, a star-shaped world held together by chains was torn apart by a big explosion, its debris sent drifting through space.

One of the inhabitants of this destroyed world, Glasses Unstrong, plans to put the old world back together with the help of her new friend, Flounder the star child. It’s not gonna be easy, but mad scientists like Glasses always find a way to get what they want!

Unstrong: Space Calamity is a 3d platformer all about planets, weird gravity and the secrets of outer space. Explore or follow the main storyline — it’s all up to you!

Play as Prince Sayri, and save the memory of ancient civilizations from wicked magic that aims to destroy the stories that contain it. Become part of beautifully crafted 2.5D worlds from Native-American folktales, and battle against an evil invader army threatening their disappearance. How much of each story will you be able to preserve for future generations to come? Become a Guardian of Lore and find out!

Rediscover the property trading game you love in a way you’ve never seen before. Mr. MONOPOLY is looking for a temporary stand-in while he takes vacation! Get ready to engage in a real-time competitive race to see who has what it takes to take Mr. Monopoly’s place.

Wield an expanding deck of mystical cards to place enemies, buildings, and terrain along each unique expedition loop for the brave hero. Recover and equip powerful loot for each class of hero for their battles and expand the survivors’ camp to reinforce each adventure through the loop. Unlock new classes, new cards, perks and devious guardians on your quest to shatter the endless cycle of despair.

Infinite Adventure: Select from unlockable character classes and deck cards before setting out on each expedition along a randomly generated loop path. No expedition is ever the same as the ones before it.

In the future, you’ve got to play a little dirty if you want to win races. Master hairpin turns across dangerous courses that twist and coil over beautiful galactic backdrops, knocking opponents into the void of space. Kick into hyperdrive with temporary speed boosts and use every opportunity to jump off the paths of the rollercoaster-like tracks. Bypass gates and checkpoints and roll over competitors on the way to first place!

The spiritual sequel to the award-winning Impossible Road is back and more ferocious than ever with all-new modes, 60 FPS local multiplayer, insane online play, and much more! So what’re you waiting for? Crack those knuckles and jump into the fastest, craziest, most spectacular racer you’ve ever played.

・All save slots available from the beginning!

・Added the “Fast Forward” mode that allows you to skip through some scenes and “Training Records” to keep the record of your previous actions!

Sekibanki goes on a great adventure set in a dream world to regain her lost memories!

Use your own head to try to clear stages full of all sorts of tricks in a 2D action puzzle game like you’ve never experienced.

Experience the bittersweet emotion of character Sam as he takes a meditative trip to a place he hasn’t visited in fifteen years, where a specter of his past unexpectedly emerges and forces him to confront old truths in new ways. Hand-drawn art and a carefully selected soundtrack of lo-fi music accompany you on this thought-provoking exploration of memories both fond and sorrowful.

Blending a heartfelt narrative with psychological commentary, Memories of East Coast challenges players to consider alternate perspectives on loss, grief and sickness, layering complex themes for full immersion without any character art. This is a personal journey, colored by nostalgia and brought to full bloom within the player’s own mind.

Experience the stories of Haru, Erika, and Manami in A YEAR OF SPRINGS, a visual novel trilogy about three friends navigating their feelings of love, connection, and just wanting to belong.

In ONE NIGHT, HOT SPRINGS, visit the hot springs with Haru, a young and anxious trans woman who just wants to enjoy herself on a trip with Manami but doesn’t want to cause any trouble.

In LAST DAY OF SPRING, spend a week as Erika, a well-meaning ex-delinquent who runs into more issues than expected when trying to plan a spa day for Haru.

In SPRING LEAVES NO FLOWERS, help sheltered university student Manami think about what friendship and romance mean to her as she spends a day with Haru, Erika, and her boyfriend.

Welcome to this new, yet familiar, universe. You are now known as Captain U and you here to locate the missing princess! Equipped with this universe’s legendary weapon, the PowerPad, you will utilize your unique powers to find the princess and save the universe!