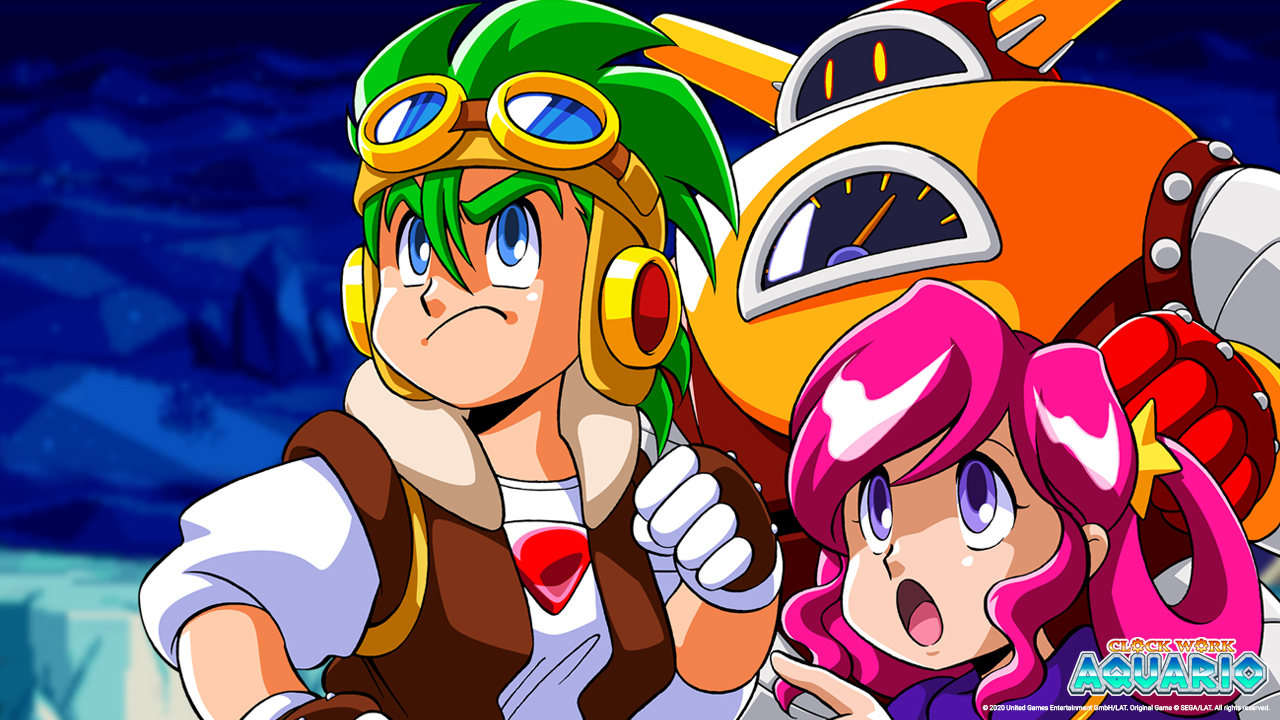 It must be devastating for all involved when a game is cancelled. All that effort, brainstorming, and hard work with nothing to show for it. The case of Westone’s Clockwork Aquario is a tad more understandable than most cancellations though. It was conceived as an arcade game, running on SEGA’s System 18 hardware, and due somewhen during 1993. Believing it wouldn’t stand a chance in a changing market, where beat’em ups were raking in the cash, it ended up being shelved after two years of toil. A flop would’ve been a financial blow for both SEGA and Westone.

If you’re wondering why you’ve never heard of Clockwork Aquario before, the answer should be obvious by now – it was never released. It’s a ‘lost’ video game. Or rather, it was lost. Published ININ has restored the ROM for a digital release, even replacing missing sprites with recreations. It’s more than just a ROM, too – this package contains artwork with pre-production sketches, a jukebox with both original and remixed music, a thank you note from the original developers and a few other thoughtful extras.

It’s presented similarly to ININ/Ratalaika’s recent Gleylancer and Gynoug re-releases, only the options slightly differ, mostly because this is an arcade game and not a console port. CRT shaders and screen size options still feature but save states and the ability to rewind are omitted. Considering the 20 min runtime, this is understandable, and neither feature is missed – arcade mode simply lets you add more credits. Arcade mode also has DIP switch settings to toggle, plus other options that would’ve only been accessible to arcade operators.

Easy, normal and hard modes restrict the number of continues to 9, 5 and 3 respectively. Later, a mini-game can be accessed from the main menu – but only once it has been discovered for the first time in co-op. Adding to this, there’s a two-stage training mode – something arguably surplus to requirement, given the game’s easy to pick-up nature.

Clockwork Aquario isn’t your typical platformer – it’s an arcade platformer. This means there’s a time limit for each stage, a reasonably challenging difficulty level (which can be mitigated by both the arcade and easy modes), and a bigger emphasis on score chasing, ergo memorising enemy locations and patterns.

Despite SEGA being attached to the project, it plays like a Super Mario game – the playable three characters (Hack Londo, Elle Moon and their robot cohort Gash) can stun enemies by bouncing on their heads before picking up and throwing them, a la Mario’s turtle shells. Bouncing from one enemy to the next increases the score multiplier, and the levels are also filled with brightly coloured balloons that boost scores while propelling our heroes higher. Leaping from several balloons in succession takes a degree of skill, but the payoff isn’t wholly satisfying – a visual or aural reward is amiss.

Each stage contains a mini-boss and a regular boss. The stages themselves are short, while also being light on variety – there’s a vertically scrolling scene, and a battle astride a sea vessel (which bears a nod to the game’s original name – Ghost Hunters) and that’s about it. If you aren’t prepared to tackle the harder difficulties and replay it several times over, you aren’t going to get your monies worth. This is a score chaser foremost.

Adding to the problems regarding length, some of the regular bosses are incredibly easy to defeat, with one able to be beaten almost instantly by hammering the attack button. The final boss puts up a tough fight but can be considered cheap, making a dent in your supply of credits with hard to dodge attacks – a classic arcade trope.

While the ‘stun, grab and throw’ mechanic is compelling, it’s the visuals that excel here. It’s very eye-catching and runs smoothly, easily being more impressive than most faux indie 16-bit games released today. Despite running on System 18 hardware, this would have been too demanding for the Mega Drive, closer resembling a Saturn or 32X game thanks to its large sprites and bright colours.

Signs of SEGA’s involvement are frequent throughout. One music track has a slight Streets of Rage 2 riff, while the enemies could have leapt straight from Sonic the Hedgehog, being clockwork, robot-like, aquatic creatures – hence the game’s name. Hack, Elle and Gash can also become supercharged for a few seconds, turning them yellow in the process. Sound familiar? Incidentally, Gash was our least liked character. They’re irritatingly vocal, and due to their size, the screen shakes slightly when they jump and land, which we found distracting.

Usually, when retro classics gain a re-release, some scallywag will point out that the ROMs can be downloaded for free and played using an emulator. That isn’t the case here. Clockwork Aquario is a short but sweet treat – a unique chance to play something that never was, lovingly restored and packaged with insight from the developers. It’s a chance that doesn’t come around often, and one that retro diehards shouldn’t miss – especially fans of SEGA and Wonder Boy specifically.

Clockwork Aquario is out 30th November in Europe, available on PS4 and Switch. The US release date is currently set for 14th December.