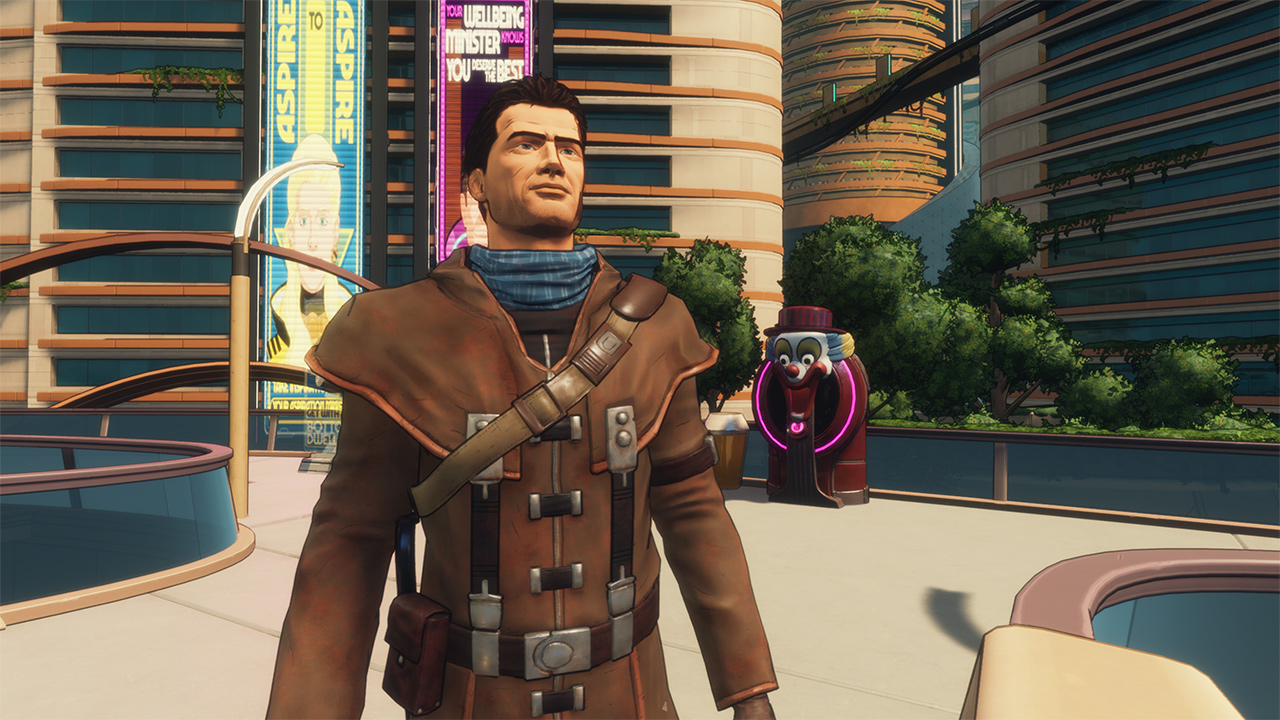 Back in 2003, UK-based Revolution Software was challenged with bringing Broken Sword into the third dimension, aiming to broaden its appeal to the PlayStation 2 generation. It was a task far harder than it may sound – few point ‘n click adventure games had made the jump to 3D at the time, and it’s likely publisher THQ (of yore) intervened.быстрый займ онлайн без отказа срочно

When Revolution set about bringing Beyond A Steel Sky – their other point ‘n click franchise – into 3D as an Apple Arcade exclusive, it was likely a far simpler process. Modern adventure games are in abundance, a trend we can doubtlessly attribute to the popularity of Telltale’s The Walking Dead series. A blueprint already existed; Revolution merely had to adapt it to their sci-fi tale of an AI-controlled city.

The story sees Robert Foster, a rugged outlander, return to the gated-off Union City while on the trail of missing children. Foster, also the protagonist of the 1994 original, is no stranger to the city’s walls – he was responsible for the spritely AI, affectionately known as Joey, that controls everyday operations. Throwing another twist into the proceedings, Foster enters the city under the guise of a dead man, having ‘borrowed’ their finger-mounted ID chip. The history of the recently departed soon catches up with him, making for a premise that quickly engages.

The borrowed framework is undeniable at first. Beyond A Steel Sky not only looks uncannily similar to a Telltale adventure, sharing a boldly drawn comic-book-style aesthetic, but it’s comparable mechanically. The UI is minimalistic while the on-screen inventory is simple to manage, usually containing a handful of items. Anything that can be interacted with is highlighted from afar, while vital dialogue choices – which propel the story – are marked in green during conversations.

There is one innovation though, successfully setting it apart from its peers. During the opening sequence – a glorified tutorial, taking place outside the city’s walls – the mild-mannered lead acquires a hacking device. This handheld scanner reveals logic tree diagrams for all manner of electronic devices, allowing processes to be switched. Puzzle elements rely heavily on hacking, mostly using the device to alter programming and manipulated routines. If you need to clear an area, triggering an alarm or playing faux panic-inducing announcements is ideal.

It’s even possible to transport valuable information around the city, using flying AI drones as impromptu carrier pigeons. Trial and error are called for occasionally, but it’s never punishing – there’s no means of failure whatsoever, ergo no ‘Game Over’ screen.

Indeed, Beyond A Steel Sky is surprisingly casual. We expected a gritty sci-fi world with shady characters and a criminal underworld. Instead, the setting is bright and colourful – a utopia full of luxury apartment blocks, quaint coffee shops, gardens and more. It even borders on the garish, no thanks to NPCs fond of wearing hideous neon-hued garments. Moreover, the tone is generally comical – characters have exaggerated personalities, in-jokes are numerous, and Joey himself often cracks wise. Sex, violence, and drug references are close to non-existent – it’s a very different, curiously sanitised, experience to the one we initially expected.

A hint system is in place too, which has a 30-second cooldown between uses. The first hint is always subtle; if you ask for another, the solution is pretty much spelt out. In most instances, it’s obvious what must be achieved – it’s the means of doing so that requires deciphering.

Players aren’t granted a sightseeing tour of the entire city, but rather restricted to a few key areas. The central plaza is connected by ‘monopods’ that lead to other areas, including apartment buildings, a museum and the city’s recycling centre. You’re going to be spending a lot of time in each location, solving multi-layered puzzles, becoming very acquainted in the process. Backtracking to the apartments occurs a couple of times too, which helps with world-building by disrupting the linearity.

The museum plays a large part as it not only contains throwbacks and references to the 1994 original (which you may spot elsewhere) but it also helps bring the backstory up to speed for newcomers.

The storyline falls foul of a few unlikely scenarios (one location is entirely evacuated after a single rat is discovered) while a quest that involves cleaning a plaza diminishes the sense of urgency somewhat. Overall, though, Foster rarely loses track of finding the missing children – there are no side-quests, and the only diversion comes in the form of collectable holo-badges. Every plot point results in a new lead, bringing the conclusion one step closer. As you step away from one location, it’s always clear where to head next, and this is despite there being no main quest log.

The bold, clean-cut, visuals have a slight last-gen look to them which doesn’t come as much of a surprise considering its Apple Arcade roots. At times I had to remind myself I was playing a new release – an onlooker even questioned whether this was an older game. The mobile original was allegedly buggy, but I’m pleased to say I didn’t encounter a single glitch here. Playing on a base PS4, it runs buttery smooth, but then again, there isn’t a great deal going on – even in the busy locations, expect to see just a handful of NPCs wandering around. Slightly gormless NPCs, at that.

While not quite a technical showcase, Beyond A Steel Sky’s blend of focused storytelling and intricate puzzle-solving, along with a curiously comical tone, make for an entertaining 8-10 hours. Fans of the original will enjoy the references, while newcomers are welcomed in by the causal difficulty and easy-to-follow storyline. It’s a little pedestrian in places – almost suggesting Revolution played this long-awaited sequel safe, for some unknown reason – but you’re still in for a surprisingly light-hearted time. Those lamenting the loss of Telltale will feel right at home.

Beyond A Steel Sky has a staggered launch – it’s due 30th Nov on the Switch eShop, with PS4 and Xbox One versions now due 7th Dec. The Apple Arcade version launched June 2020.

SCORE
7
Beneath A Steel SkyBeyond a Steel Sky