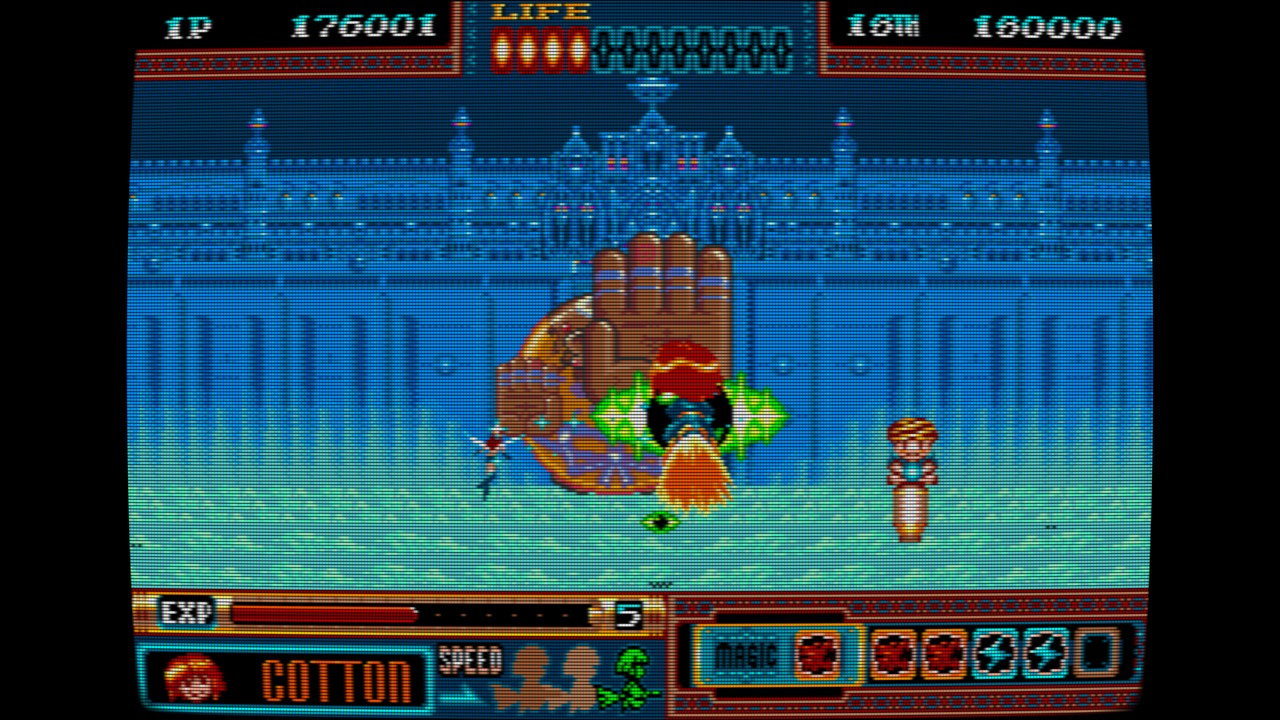 This year’s Cotton series revival shows few signs of slowing, with the SEGA Mega Drive shooter Panorama Cotton re-emerging for release on modern systems. This month also marks the first time the game has been reissued since its original Japan-only appearance over 25 years ago. Boxed copies of the original today fetch a whopping 55,000 yen (£350) on Japanese auction sites.займ 100 с 18 лет

Maybe there is a method to the bidders’ madness. Launching in 1994, Panorama Cotton is a seriously impressive Sega Mega Drive title.

Cotton has, historically, rarely been afraid of reinvention, and Panorama Cotton is no exception. The game’s terse title tells us everything we need to know, in fact: the camera is now placed right behind broomstick-riding witch Cotton, revealing a panoramic view of the worlds she flies through.

This transforms the game from side-scrolling shooter to an into-the-screen shooter. Similar to Space Harrier and Galaxy Force II at the arcade, sprites are constantly manipulated and thrown about, giving the impression of movement and depth. The effect is so convincingly implemented here that it recalls an alternate future where 3D games would be constructed out of richly detailed sprites.

As you’d expect then, Panorama Cotton involves flying onward, shooting at things, all the while dodging scenery, enemies, and projectiles. But it’s not without its own twists. As with the original game there are several aspects to Panorama Cotton that set it apart from other games of the same ilk.

For starters, Panorama Cotton retains the crystal-juggling antics. Enemies drop crystals, with yellow crystals powering firepower, and other colours granting screen-filling magic. Shooting crystals cycles them through different colours, at the cost of keeping them in mid-air – distracting you and obscuring your view. There’s a satisfying risk-reward system at play here, especially when you must hold back your fire to absorb the crystals.

Cotton also doesn’t fly at a fixed speed, instead, her flight speed can be adjusted between three states. While this initially seems perfunctory, giving you less time to dispatch enemies and anticipate obstacles, each stage has a best clear time. Replaying levels with the speed setting cranked up to reckless levels adds an extra layer of high score chasing.

It’s the level design though that shows original developer Success was still riding a creative wave, moving from the gothic thematics of previous titles to more vivid, illusionary worlds. Stage 3 starts with Cotton flying above the night-lit train tracks, before making a sharp dive underground, proceeding in, out, and around an ancient gallery en route to the boss inside it.

The dynamism of the ride is impressive and frames the action perfectly. Indoor locations constantly twist and turn while forcing you to fly around all sorts of floating debris, while at some points Cotton is never afraid to nosedive toward the ground at full speed, before yanking herself upward to realign at the last moment. The segments where Cotton flies upward rather than forward recontextualise the action, removing the need to dodge oncoming scenery in order to focus on a pure shooting gallery style gameplay.

Boss encounters show similar levels of creativity to play. One mid-boss encounter forces you to partake in a game of Rock-Paper-Scissors. Another boss hurls its enormous fists your way with unpredictable timing. A late game encounter sees the enemy skip across a bunch of rocks atop a river – aim at the rocks and you see your shots bounce straight off.

Repeated replays reveal new scoring opportunities, whether it be multiple paths through a level, or stranger gimmicks, like these irregularly appearing Kangaroo tablets that, if all activated, reward a bonus later on. The designers also place bonuses items in precarious places across the game, tempting you to take more risks while flying.

Now all of the above would make Panorama Cotton a prime candidate for a captivating shooter in modern times if it weren’t for one problem: This port, handled by Ratalaika Games, falls short of delivering an accurate recreation of the original game.

There is one major issue which needs addressing in a future update and prevents us from recommending this title outright, and that is inaccurate sprite rendering. Put side by side with the original game running on real hardware and there are missing sprites in the new emulated version.

This ranges from superfluous-but-still-worrisome (missing rocks on the ground of the opening scene) to downright unacceptable (enemy projectiles and scenery that need to be avoided are now rendered invisible). While the game does have some sprites which are hard to make out, like the bubbles at the start of stage 2, here you’ll find yourself taking damage without warning because you literally can’t make out what obstacle you’re meant to be avoiding. It makes clearing the game on a single credit an exercise in frustration.

Why this has happened is a bit of a mystery, because the quality of the emulation in last month’s Gleylancer, also developed by Ratalaika Games, was pretty solid. If we had to hazard a guess this one was rushed out the door. Indeed, unlike Gleylancer the story scenes here have been left entirely untranslated.

In its current state, this modern release of Panorama Cotton is a tricky one to recommend. There’s still fun to be had due to the sheer quality of the source material. But it’s blighted by inaccurate emulation that adds unfair difficulty to the game, and for that reason, we recommend waiting for a patch. We’ll update this review when one eventually surfaces – we reached out to publisher ININ but have yet to receive a response. One of the Mega Drive’s least celebrated gems deserves better than this.

Panorama Cotton is published by ININ Games. Available now on PS4 and Switch.