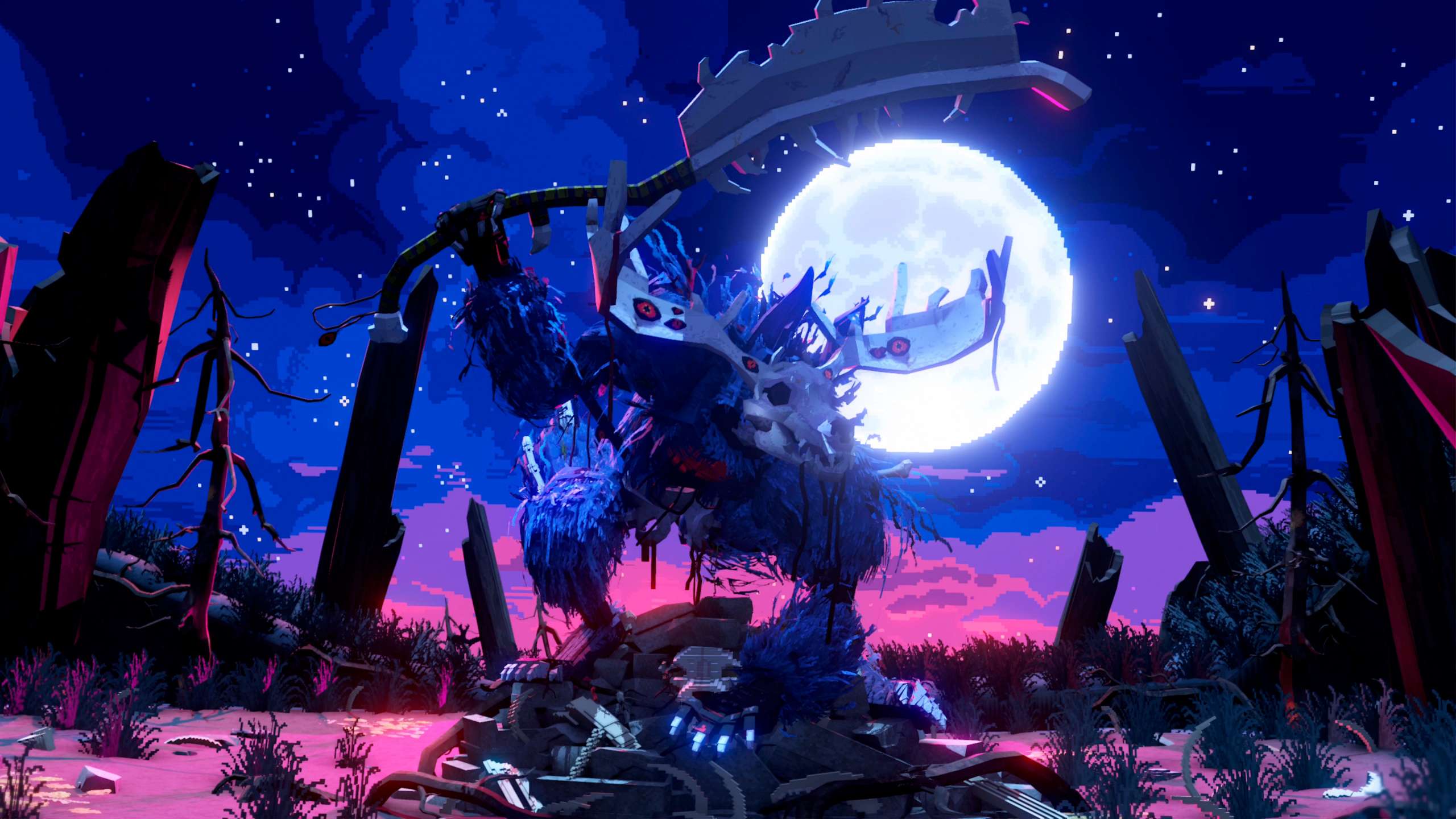 The timing behind this ‘80s set adventure RPG is perfect, launching just a few months ahead of The Stranger Things’ anticipated fourth series. It shares more than a few similarities with Netflix’s colossal hit, even including boss battle music not far removed from the show’s main theme song.

It manages to skirt around grounds of plagiarism by featuring a largely different plot, involving a crashed UFO and a curiously friendly alien squid, evil android adversaries, and a school principal with dark secrets. It borrows from Nintendo’s Earthbound too, with a cast of kookie characters – including talking animals – and a small-town setting.

Echo Generation makes a good first impression with its bright and vibrant visuals – it presents the best use of voxel graphics so far, besting Moonglow Bay, and effects such as distance blurring aren’t lathered on too heavily. Even before stepping out of the protagonist’s homestead, you’re treated to a dollop of ‘80s nostalgia, and there’s a glorious array of chunky pixel retro consoles and computers present throughout. It’s also obvious from the outset that it doesn’t take itself too seriously, with enemies including rats the size of cars, plus other nonsensical sights.

Coupled with a synthwave musical score, we thought we were in for a treat – a nostalgic, sci-fi adventure with comical overtones. Cracks in its exorbitantly colourful exterior soon start to emerge, however, revealing a mixture of peculiar and lazy design choices behind that lustrous sheen. This is on top of the bland UI, featuring clear cut presentation that’s suspiciously placeholder alike, and a lack of options usually associated with modern RPGs such as adjustable text and battle speeds.

It’s within the battle system that many of the game’s problems lie. Battles are turn-based and play similar to Paper Mario/Mario & Luigi with each attack requiring a well-timed button press, via a microgame of sorts, to deliver maximum damage. You may have to button bash, stop a spinning dial, or line up moving shapes before they overlap. Failure can be unforgiving, resulting in an attack far weaker than even the standard kick or punch. Weirdly, there are no character classes either – ergo no support, ranged attackers, tanks or healers. The party is made up solely of melee attackers, with the added caveat that companions – including the family cat – can’t dole out items.

The blocking system left a particularly sour taste, to the point where we were in minor disbelief. Blocking requires a well-timed button press likewise, and mastering this timing isn’t too tricky. Yet characters still take significant damage. During one early boss battle, our characters had 20 HP yet “perfectly” blocked attacks still zapped 8 HP. This means you’re constantly blitzing through your stockpile of health top-ups. While some can be found within environments – and a handful usually just before a boss fight – they can be costly to purchase.

Cash doesn’t flow readily enough to harness a large stockpile, and it isn’t long until progression relies on buying expensive books from the downtown bookstore. If you’ve splurged on health bestowing snacks without knowing this, you’re forced to backtrack and grind – a dull and painful process.

Returning home to sleep is another way to restore HP, adding unwelcome backtracking. It’s perhaps a good job that the game world is small compared to similar RPGs. The small size is hammered home upon visiting the town’s typically recluse inventor for the first time. Their cluttered garage contains several times required to access new areas, and they can only be acquired by exchanging some oddly non-specific items in return. Not only does it smack of laziness to place all these essential items in one location, but it also means you’re going to be returning here often, diminishing the sense of being part of something far bigger than the town itself.

As much as I wanted to enjoy Echo Generation, I was in constant worry that it would let me progress or stroll into an area I was unprepared for. Barely an hour in, I found myself grinding for XP to tackle a boss that spanned the full width of the screen (incidentally, expect an 8-10 hour runtime) and after discovering the price of aforementioned books and seeing just two measly dollars to my character’s name, the pacing and padding issues became highly apparent.

Due to the lack of manual saving, it’s impossible to reload past checkpoints and retry areas where you may have splurged on items. Or – and as was my case – becoming trapped in a boss room with only three healing items whilst being underpowered.

Cococucumber may have mastered voxel art, but there’s little to no mastery on display when it comes to role-playing fundamentals. Appropriately enough, it feels like an experiment gone wrong.

Echo Generation is out now on Xbox One and Xbox Series S/X. Coming soon to PC.