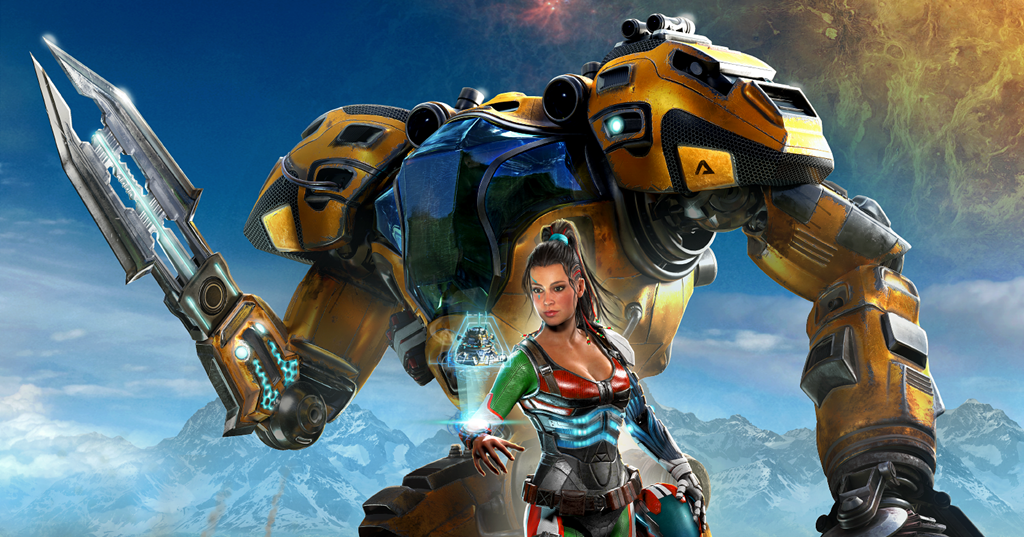 If you’re familiar with EXOR Studio’s previous works, you’ll be right at home with The Riftbreaker. It takes the groundwork from the RTS twin-stick shooter hybrid X-Morph: Defence and combines it with the guts, gore and carnage of the sleeper hit Zombie Driver HD. This isn’t a re-tread of old ground, however – The Riftbreaker is built on current-gen tech (PS5, Xbox Series, PC) while also carrying over the skill and expertise EXOR has acquired over the years.

During the hour-long prologue, which acts as the tutorial, the game’s visual punch hits hard. In a genre not best known for its visual clout, The Riftbreaker dazzles. Set on the remarkably colourful planet of Galatea 37 – which you’re tasked with colonising – the vegetation is dense and detailed, reacting to your mech suit’s heavy footsteps. It’s backed further by realistic lighting and shadows, and the game engine showcases next-gen carnage – when the mech’s AI warns of thousands of incoming enemies, that’s no exaggeration. The planet’s crimson-hued lifeforms turn the screen into a red sea, and while your defence turrets fight off the swarm, the framerate never falters.

During the first hour or so, it also overloads the senses in an entirely different way. Upon opening the menu for the first time, you’re presented with separate screens for crafting upgrades, altering loadouts, and a research tree formed from several branching paths and teeny tiny icons. While daunting, it’s also at this moment the game’s depth is revealed. There are tonnes of possible loadouts, with the mech – affectionately known as Mr. Riggs by its human pilot, Ashley – able to weld two different weapons and carry an assortment of mines and grenades. The research tree adds additional flexibility, giving the choice to improve arsenal, unlock new building types, or acquire new tech. This in turn provides a lot to master and experiment with.

The goal in The Riftbreaker is pleasingly simple. In theory, at least. After landing on the unexplored planet, it’s a case of setting up a base while surveying the land before setting up a rift gate. This interplanetary portal is a colossal structure requiring a hefty stockpile of resources, as well as its own supply lines – including a water pipe network. It isn’t something created with just a few button presses – it’s a purposely time-consuming experience requiring planning and methodical thinking. If you’re expecting a game based around quick skirmishes and brief campaign missions, then you’re in for a surprise. It takes 1-2 hours of scavenging and base building just to get the fundamental structures operational, and you’ll need to bolster firepower before focusing on the gate.

Unsurprisingly, it’s resource gathering that slows the process down. Galatea 37 is littered with valuable caches which must be discovered, mined, and stored. These are spread out across the map, giving incentive to roam and explore – this isn’t one of those RTS games where the action is confined to a single screen, the immediate area shrouded by fog of war. As well as the base, you’ll need to set up mining rigs with their own power sources and maybe a defence turret or two. Over time, these become depleted, paving the way for underground scanners to locate hidden stockpiles. It’s a case of strip-mining the planet for all its worth – something beaten around the bush initially. Outlining this earlier on would have been beneficial.

There’s a constant power struggle going on too – not in the literal sense – with wind turbines and solar panels affected by the current weather. Random events can also impact their operation massively, from tornados to thunderstorms. Earthquakes and meteor showers can be devastating, ruining plans. Indeed, a sudden natural disaster can be frustrating if you’re low on resources, making it tricky to get back up to speed.

Then there’s the small matter of the alien wildlife – swarms of vicious creatures that roam around and occasionally approach your base, as if to test its defences. Sometimes you’re even tasked with clearing out a hive or tackling a large boss-style adversary. Incidentally, there’s a slight whiff of Avatar (of the James Cameron variety) present. Ashley wants to study the planet’s hostiles, wondering why they’re attacking, while Mr. Riggs demands she focuses on the mission. This leads to a conflict of interest, which enriches the dialogue and helps carve stronger personalities for the duo.

Mr. Riggs can be kitted out with shotguns, flamethrowers and more, while the default weapon is a large sword able to kill a group of smaller enemies in one swoop. Enemies explode into meaty chunks, making for quite a satisfying combat system, and there’s more depth than you may expect due to the presence of a dash move and unlockable upgrades. If Mr. Riggs is defeated, they respawn at HQ. If the HQ is somehow destroyed, then it’s back to the last checkpoint. Remember to save!

As well as the time-consuming campaign, there’s a survival mode with various difficulties and a full suite of customisable settings, from rock bottom construction costs to the length of a game. We thought we’d be able to build a base and survive for an hour, only to fail. That’s to say, even the survival mode requires a degree of commitment and familiarity with more than the basics. Or to reiterate even further, The Riftbreaker isn’t going to appease those looking for a quick fix of twin-stick shooting; this is geared towards battle-hardened RTS players used to spending several hours on a single map, slowly preparing for a grand finale with a few dramatic battles along the way.

The Riftbreaker burns slow, and it burns bright. A culmination of everything EXOR has mastered in the past, it’s delivered with a rare air of confidence and gusto.

The Riftbreaker is out now on PS5, Xbox Series and PC.