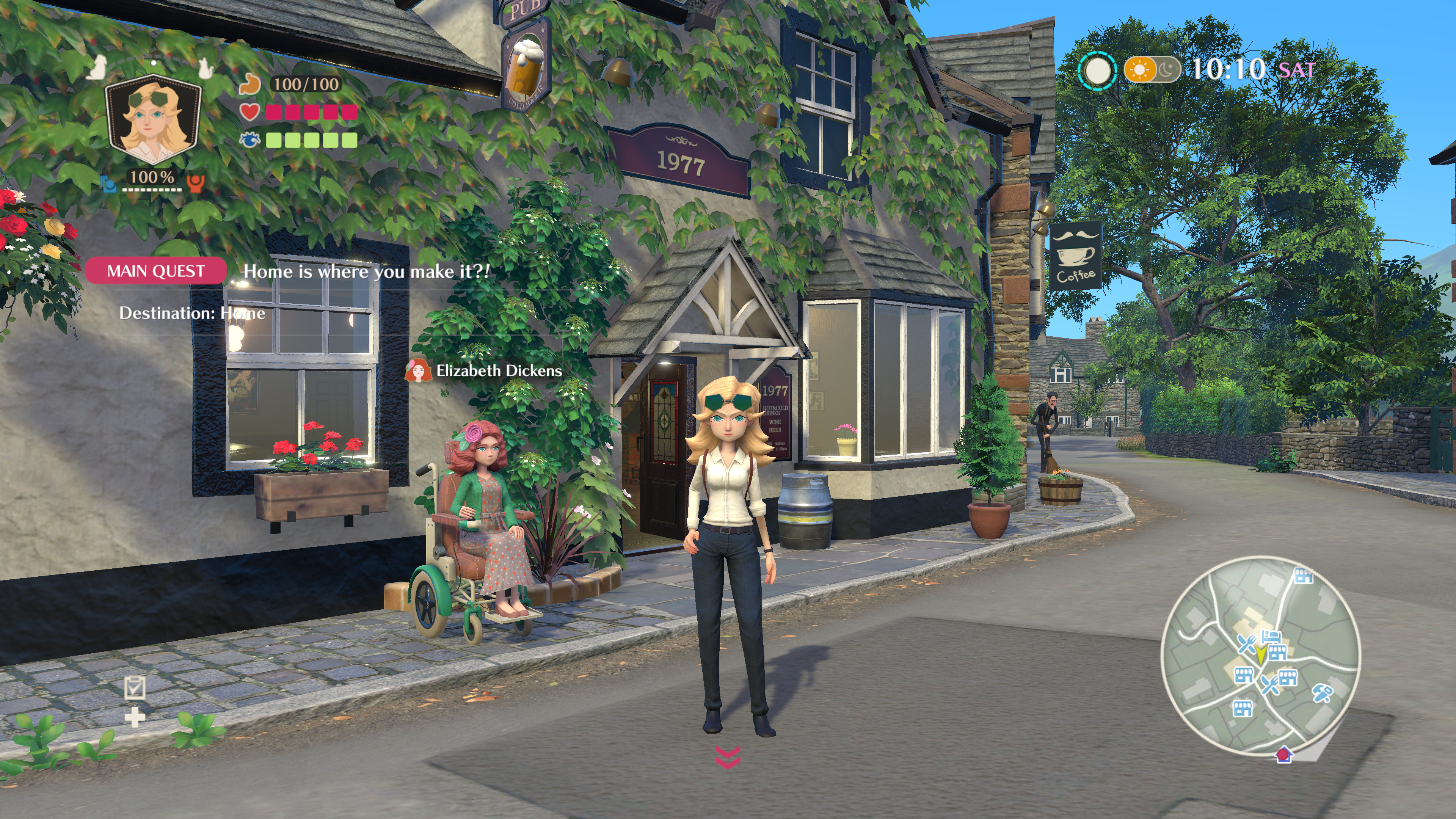 This open-world adventure is set in a quaint, rural, British village allegedly inspired by Lancashire. Despite the fictional setting being almost 6,000 miles away from the developer’s Osaka-based studio, there are numerous well-observed details dotted around the cobblestoned town square.

There’s the presence of quintessentially British red phone booths and post boxes, and the fact that the town’s sole ATM is located at the post office – as is increasingly becoming the norm. The menu for the town’s pub also mostly consists of burgers priced at around a tenner, which again, is well-observed. It’s even possible to snack on Marmite on toast. Or rather, Mormite.

Go looking for even smaller details, and you’ll find a few ‘uncanny valley’ instances that British people will instantly pick up on, such as said pub opening at 6am, and the local butchers stocking a range of pizzas. As a British person, I found that these minor defects made the fictional town of Rainy Woods all the more compelling to explore. An uncanny valley indeed.

Speaking of people operating outside of their home turf, The Good Life introduces us to Naomi Hayward, an American newspaper reporter. After being tipped off that this place is like no other, she travels to Rainy Woods to uncover its secrets. Despite being given free lodgings at a ramshackle cottage, she constantly refers to the town as a ‘Goddamn Hellhole’ – something soon established as her catchphrase. Much to our chagrin, she’s also fond of yelling “Yeah Baby!” irritatingly often.

The town’s major secret is uncovered as early as the prologue. After becoming acquainted with some of the townsfolk, Naomi soon discovers that at night, the oddball cast of NPCs magically transforms into cats and dogs. The crux of the plot – narrated by a Ringo Starr sound alike – is how and why, and as Naomi delves deeper, increasingly absurd twists are revealed.

During the prologue, she also gains the ability to transform into both canine and feline forms, gaining the abilities of each. Cat Naomi can climb walls, hunt small creatures, and squeeze into tight gaps. Her canine counterpart has a slightly wider range of skills, including the ability to track scents – used to follow NPCs – and dig.

These skills are put into use throughout, not just within quests but also while merely exploring. However, the fact that the townsfolk transform every night is soon pushed aside. A day and night cycle features – a la Harvest Moon/Story of Seasons/Shenmue – and you’re encouraged to look after Naomi’s health by turning in at a decent time. There’s no real reason to explore during the twilight hours either as locations shut for the night, and it’s impossible to converse with the town’s transformed inhabitants while they scurry around the plaza.

Naomi’s cottage is where you return every night, being a central part of the gameplay loop. It’s here you can rest, cook, and plant crops in the garden. Money can also be earned by uploading photos to a comically outdated computer, with each ‘like’ generating cash. The loop of waking up, cooking a stamina-boosting meal using foraged ingredients, seeing how yesterday’s photos performed, and then checking on crops is compelling despite its repetitive nature. Crops don’t require maintenance (no watering – hurrah!) while checking for ‘likes’ is just as rewarding as using real-life social media. Looking for photo opportunities remains a simple pleasure throughout.

Less compelling is the fact that Naomi can become sick with several ailments, which results in a hefty bill from the town’s vet(!) Other means of making cash are slim, with catching and selling rare bugs to roadside merchants being one of the few examples. At one point in the storyline, Naomi is forced to upgrade her camera – a costly endeavour. Her camera can also randomly break. It’s tough to fantom what developer White Owls thought this would bring to the experience.

It’s outside of the core loop that things take a tumble. The main missions – which take our roving reporter out of town and into mountain ranges, castle ruins and surrounding lakes – vary wildly in quality, and usually centre heavily on bargain bin mini-games. Real rock bottom, barely functional stuff. One was so scrappy that it had us shaking our heads in disbelief, taking place on a featureless flat plain like something from the PSone era.

After a dramatic opening, the main storyline also loses its way somewhat, becoming fixated on introducing a line of increasingly eccentric characters and detailing their personal struggles.

Going back to the day and night cycle, occasionally the main missions require you to be at a certain place on a certain day, meaning you’re forced to kill time. Thankfully, it’s possible to read books or turn in early for the night to turn the clock forward. Mission tracking waypoints are also surprisingly clear, and providing you aren’t on an ‘urgent’ mission it’s possible to change quests on the fly.

Some missions take Naomi so far out of town that you may have to stay overnight at a hotel or pay to use a campsite’s facilities – something we found oddly comforting. A vacation within a vacation, if you will. The map is marked with shrines to find – which can be used to fast-travel, albeit at a cost – and we spent a relaxing hour or so travelling around the countryside visiting each while snapping the sights. The great outdoors isn’t particularly picturesque, sadly – it’s incredibly sparse, mostly formed of green featureless fields with the occasional farmhouse.

Navigating the country roads via sheep – yes, Naomi rides a sheep around town – isn’t the most thrilling of pursuits either as there’s no traffic on the roads whatsoever, The game’s engine is rather antiqued – there’s a strong chance AI-controlled drivers may have pushed it over the edge.

In fact, if somebody told me The Good Life is an HD remaster of a long-lost GameCube era title, I’d believe them. It’s reminiscent of Harvest Moon: A Wonderful Life, in particular. It even resembles an HD remaster of something first released in 2003; a mishmash of detailed and fuzzy textures placed next to one another, angular character models with brief animation loops, sparse outdoor locations, and indoor environments with an inconsistent level of detail.

Coupled with the mechanically poor mini-games, this makes for a vastly outdated experience. Typos (the word cottage is misspelt as ‘cottag’) and glitches likewise make the £30+ price tag harder to swallow.

We’d also argue that the billing of a ‘debt repayment RPG’ is a tad misleading. Naomi is in debt, this much is true. However, repayments are scripted events, taking place during cut-scenes. After first hearing this term, we imagined it was something we’d have control over, taking on extra quests to make a dent in the outstanding balance. But no – it’s something entirely out of the player’s hands.

Despite its faults though, I can still imagine The Good Life finding an audience. The absurdity of the plot, the quaintness of the town, and the focus on photography as an income are just enough to make the journey worthwhile. Had it existed on GameCube in 2003, we’d be talking about it today in retrospect with the same fondness as some of the system’s finest. Problem is, this is 2021, and lot of The Good Life’s aspects are borderline functional and nothing more.

If the thought of playing a long-lost GameCube era title appeals, by all means, take a trip to Rainy Woods. For better or worse, it turns out somebody does still make ‘em like they used to.

The Good Life is out now on PS4, Xbox One, Switch and PC.