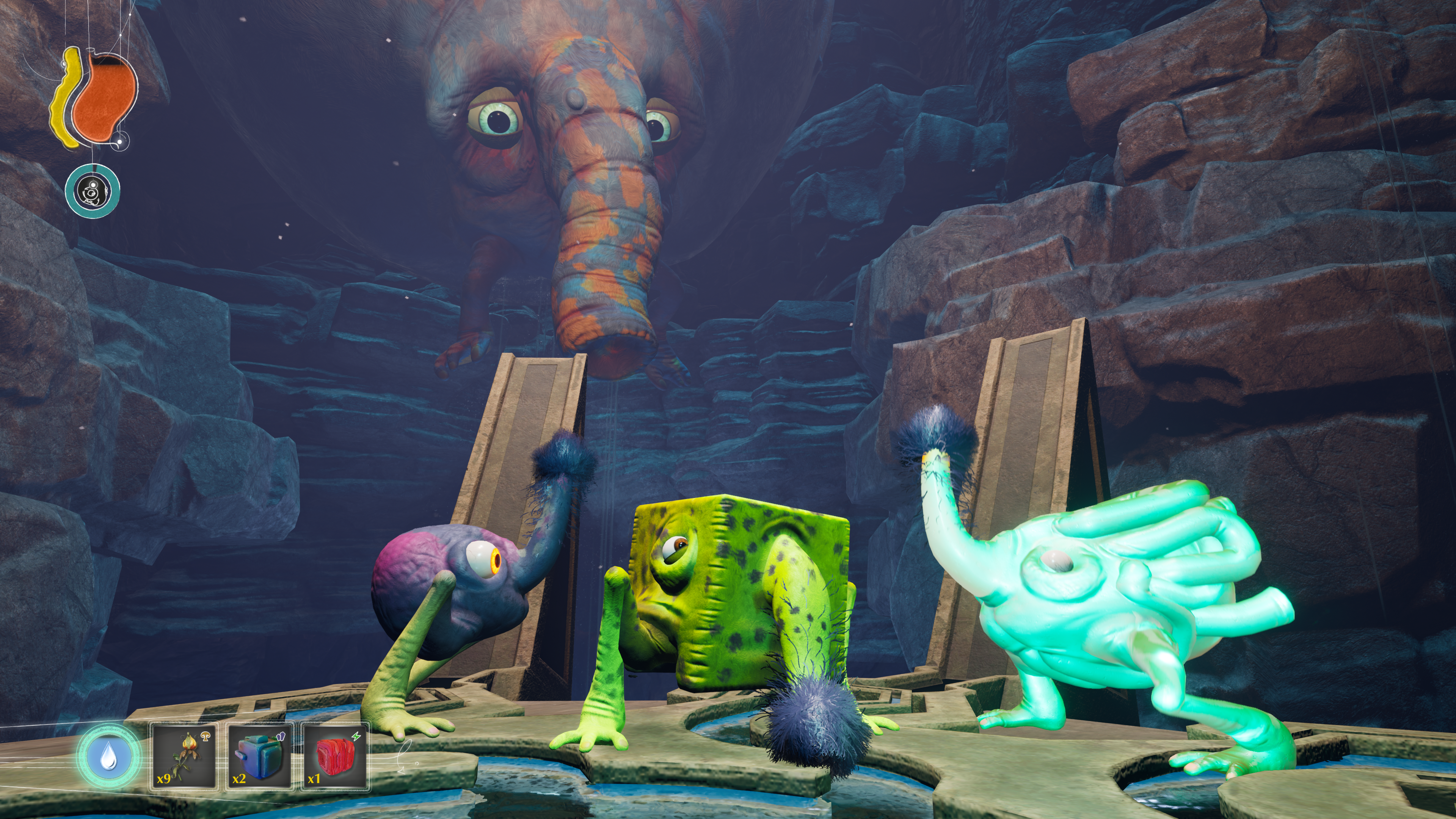 Due to its focus on evolution and survival, I expected ‘The Eternal Cylinder’ to be a metaphor for life and death, much like Disney’s patented (presumably) Circle of Life. It soon transpires that the titular cylinder is a physical object – a colossal, world-spanning, metallic drum that steamrollers its way across an alien world, killing and crushing everything in its path. The only respite comes from magical towers, temporarily able to withstand its force. All is not lost, however – there’s a glimmer of hope, which – worryingly – stems from the universe’s most diminutive of creatures.карты рассрочки онлайн оформление

The Trebhums are far from courageous or vicious. Small in size and stature, they’re goofy bulbous beings known to be stubborn. However, they also have highly adaptable DNA. Their most defining characteristic is their trunk, used to both inhale and exhale objects. Consuming certain plants and minerals gives them webbed feet, longer legs, a thick coat of fur, and even the ability to float. To survive, you’ll need to mix ‘n match these body parts accordingly, and there are dozens to discover.

Seeing your Trebhum posse go from gormless Q*Bert clones to a gaggle of weathered veterans with all-manner of funky appendages is oddly enduring. Trebhums can be named too, meaning you’ll likely grow attached. More can join your cause – switchable via the LB/RB buttons – if you’re able to locate and free them. Death can come swiftly and unexpectedly but providing you’ve amassed a stockpile of gems, your loyal disciples can be brought back to life via magical summoning circles.

Mostly due to its original premise, it takes a while for everything to ‘click’ into place. The game world – a surreal alien landscape, filled with exotic flora and fauna and oddball adversaries – is spilt into large vertical strips which you’re free to explore. You may find a lost Trebhum, some vital evolutionary upgrades, or a shrine that may house a puzzle or an encounter that’ll drive the story forward.

Strolling into the next area prompts ‘The Eternal Cylinder’ to spring into life. The sky turns red and ominous music plays; this is your cue to flee (the Trebhums can tuck ‘n roll, incidentally) to the next tower, which ceases the cylinder’s movement so you can explore the land ahead. When the cylinder is right on your tail, it can feel genuinely unnerving, successfully generating a sensation of panic.

Along the way, you’ll have to endure thunderstorms, boss encounters, and harsh environments. Unfortunately, this means some trial and error – enter an area without the correct evolutionary upgrade, and you’ll soon be faced with the Game Over screen. This isn’t quite as frustrating as it may sound, as the whole experience is designed around dusting yourself off and retrying. Checkpoints are only a few minutes apart, plus the game auto-saves regularly. You’ll also soon learn to manually save whenever reaching a safe zone with a posse intact.

In some ways, The Eternal Cylinder is a little dated. Especially how death can come without almost any warning. The path ahead is always clear – and having a narrator certainly help here – but you may need to take a few chances to reach that destination.

In others ways, it feels modern and fresh. It’s visually appealing and there’s some impressive tech – the cylinder stretches far into the distance, and even mountains crumble into tiny pieces under its might. The evolution aspect is fun and inviting, too, with the metamorphosis of the Trebhum taking place in real-time. But now and then, it fumbles and some of that appreciation is lost. The camera is prone is misbehaving when visiting shrines, and sometimes progression is a case of inhaling every consumable object nearby and hoping it’ll trigger the required evolutionary upgrade.

These minor faults aren’t enough to tarnish the experience, thankfully. And rest assured that this is an experience like no other. A few rough edges and some surplus ideas aside – Trebhum are required to eat frequently, but this doesn’t seem to amount to anything meaningful – I feel like developer ACE Team (Rock of Ages, Zeno Clash) have managed to achieve their vision. It tells a unique story, set across a surrealist backdrop, with a cast of the oddest characters in recent memory.

Those who with a fondness for wildlife spotting in No Man Sky’s, or perhaps recall the likes of Spore and Impossible Creatures on PC, will relish its dreamlike delights.

The Eternal Cylinder is out now on PS4, Xbox One and PC.