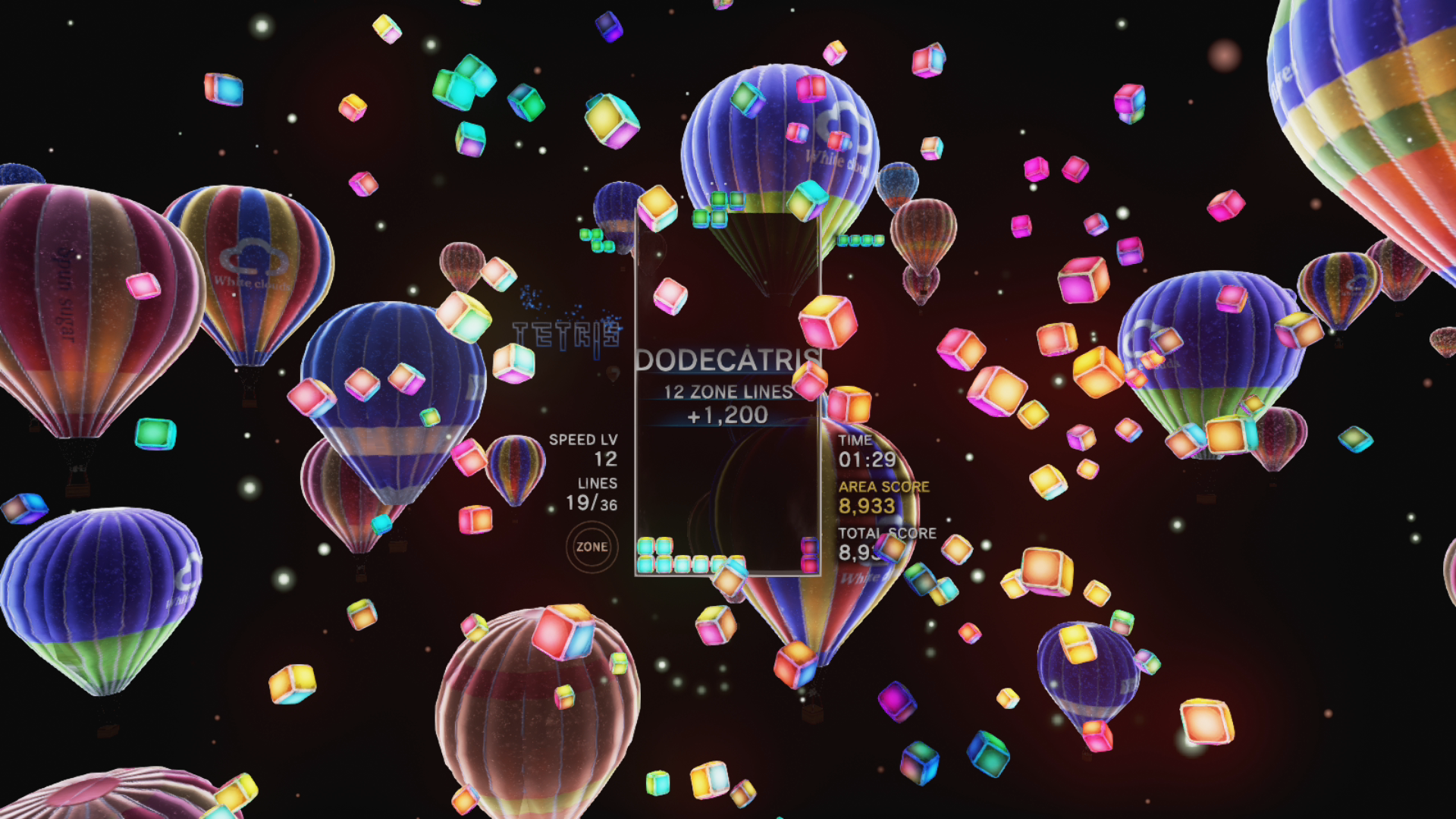 Tetris is eternal. Throughout the past three decades, the falling block puzzle game has evolved across a plethora of appearances, many of which have earned their status as all-time classics.

From the simple appeal of marathon mode in Tetris DX, to the puzzle trappings of Tetris Plus and Tetris with Cardcaptor Sakura, all the way over to high-level competitive play in Tetris 99 and Tetris: The Grand Master, Tetris has also cemented itself as one of the most versatile and everlasting concepts in video games.

This of course rings true for this Switch release of Tetris Effect: Connected, which expands upon 2018’s Tetris Effect by adding some well thought out multiplayer options. The Switch version launches alongside the new model with an OLED display, and it’s certainly one of the best ports we’ve seen on the system for several reasons we’ll get to.

Much has been said about the original Tetris Effect already, so we’ll keep things short: Named after the phenomenon where the act of playing Tetris lingers in the brain long after you put down the controller, Tetris Effect pairs the legendary Tetris with a masterclass in audio-visual design. Basically, this is a game that has visionary game designer Tetsuya Mizuguchi’s fingerprints all over it.

Each stage sees the play area surrounded by a swarm of beautifully animated particles illuminating the enriching natural and abstract 3D backdrops behind it. The main attraction – Journey Mode – is a powerful new interpretation of the Tetris level theme, transporting you to places like a desert, underwater with swimming dolphins, or in the skies alongside a group of hot air balloons, all the while the difficulty level steadily ramps up.

Where Tetris Effect’s presentation has always stood out is how it brings to life a physical presence to your actions. Simply moving a floating Tetris piece or performing a hard drop makes the board undulate in reaction, all while those beautiful backgrounds evolve as you clear lines and the tempo changes to fit the music. That desert we mentioned earlier goes through a time-lapse mid-way through the level.

The combination of on-screen action with a slow build-up of special sights and sounds does a fantastic job at creating an immersive feeling of synaesthesia, while also helping you concentrate and get in the zone – which itself is the name of a new life saving ability that freezes time, allowing you to stack line clears in pursuit of an 18-line Perfectris. Never has single player Tetris evoked such a wide variety of emotion during gameplay – especially when game speed is slow. And the emphasis on game speed changes and strategic line-clears keep play both strategic and hectic at the same time – it’s rarely dull even in Journey Mode’s early stages.

Tetris Effect’s single player was always going to be a hard act to follow, then, but the new multiplayer modes in Tetris Effect: Connected are equally transformative. With the fantastic presentation already nailed down, the game designers instead have focused on elevating multiplayer Tetris in a unique way beyond the standard classic modes that have also been lovingly recreated here.

In the aptly named Connected mode, three players team up to take on a series of AI bosses. Proceedings kick off with you all apart and alone, your own cleared lines filling a shared metre. In the meantime, the Boss clears its own lines, pummelling you with all sorts of annoying board- and game-changing ailments in a bid to fill your boards, knocking you out. This is the defence phase.

Brilliantly, once that shared metre is filled, your boards merge together in a powerful animation and you’re now cooperatively playing Tetris. Instead of voice chat, you see the position of each player’s pieces as each player awaits their turn – Tetris is the only language spoken here. This is the attack phase, where any lines cleared add garbage rows to the bottom of the Boss’s board. Smart use of rare pink Tetris pieces – which dissolve into individual pieces when dropped can make the difference between many lines cleared and just a few.

This frantic to-and-fro between individual, focused, play and more measured cooperative play never stops being exciting. Better still, Connected Vs mode sees a human assume the role of the Boss, making those Attack phases even more of a war of attrition.

What of the brand new Switch port? We must admit we went in expecting the worst – last year’s Xbox One S version was locked at 30fps, and that console is many times more powerful than the Switch…on paper at least.

To our delight it turns out these fears were unfounded – not only are the graphics suitably crisp in both handheld and docked modes but Connected runs at a butter smooth 60fps with super-fast input response to boot, enabling speedy play and ensuring the swirling particle effects sing. It’s especially a looker played directly on the new OLED model of the Switch, the area surrounding the Tetris board fading away thanks to the deep blacks of the new screen, allowing the pyrotechnics of the background effects to work their magic uninterrupted.

Adding to the port’s technical chops is a delightful implementation of the HD Rumble where you can even feel the position of the Tetris piece you’re manipulating. As in the developer’s own Lumines Remastered the additional nuance to the haptics essentially echoes the audio waves of the music straight to your hands – and other body parts. As a nod back to the trance vibratory used in Mizuguchi’s own Rez, up to eight additional controllers can be paired and set to vibrate to an alternate pattern. This feature elevates the impact of the game’s central audio-visual showpiece even further.

Tetris Effect: Connected on Switch is the real deal. It’s a perfect conversion of a special game that’s been made even better by the addition of an inventive multiplayer mode that brings players together through the common language of one of the world’s most recognisable gameplay concepts. We can’t wait to see what’s net for Tetris, but for now, rest assured that this game earns its place in the hall of fame of Tetris Forever Games.

Tetris Effect: Connected is out now on Switch.