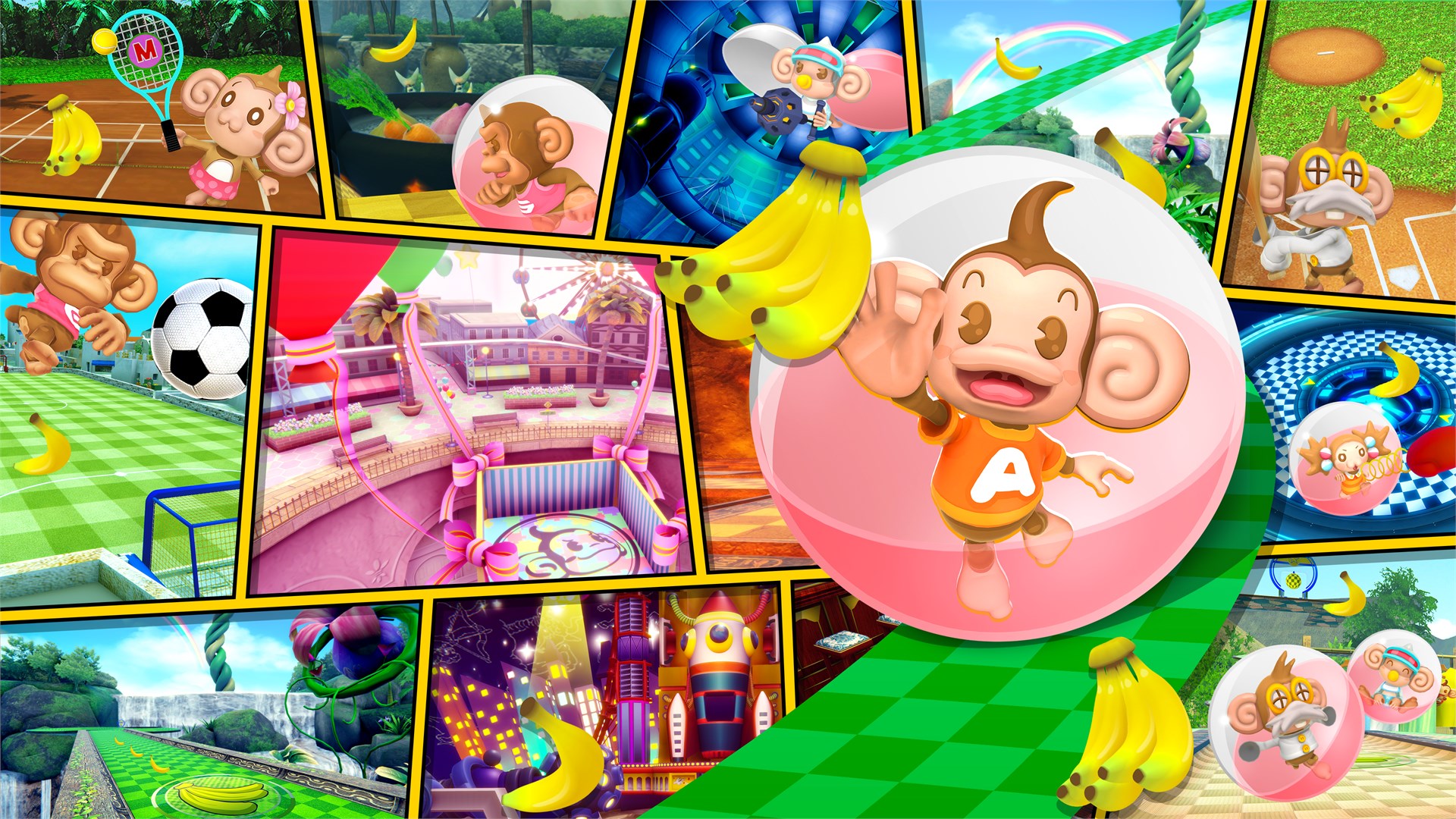 SEGA’s original early 2000s arcade game Monkey Ball, along with its home console remake, Super Monkey Ball, are both what we like to call “forever games”. Two decades after release and they’ve still yet to outstay their welcome.

In true classic SEGA arcade fashion, the games were graced with an incredibly simple concept that was utilised to the fullest – use just the analogue stick to tilt a floating stage, in turn rolling a capsuled monkey to the goal. Easy to pick up, difficult to master.

Every new stage tests your dexterity with the controls just that much further, along with your own understanding of the game’s robust physics engine – so robust that even F-Zero GX later adopted it. You’ll start out on simple flat surfaces but before you know it, you’re navigating an unfolding cube, or rolling around a shiny SEGA logo.

With all that in mind, then, new remake Super Monkey Ball: Banana Mania – known in Japan as Super Monkey Ball 1&2 Remake – should be a shoo-in for one of the best games of all time. As always with remakes, though, things are a little complicated.

On paper Banana Mania has everything it takes to be a winner, bringing together over 300 classic levels from Super Monkey Ball, lesser sequel Super Monkey Ball 2, and mid-2000s remix Super Monkey Ball Deluxe. Even the outrageously good party games make a return, including the legendary hot-seat multiplayer game, Monkey Target.

Coming from years of muscle memory from the GameCube originals we immediately noticed that the rolling physics feel off in Banana Mania. Your monkey flies and bounces further now, while also losing momentum faster on slopes. Worse still, the instantly recognisable rolling sound effects from the originals have been neutered, too, producing a strange disconnect between surface and character. Additionally, mini-games like Monkey Target and Monkey Bowling feature less nuance in their programming.

Having new and different physics is not an inherently bad thing by any means, but the problem is all the stages in this game were originally designed around the physics from the original games. This has the side effect of breaking the intended flow of certain stages, both simple and complex.

One early stage from Super Monkey Ball (Advanced 2) now unfolds completely differently when played under identical circumstances, its floating banana bunch no longer serving the same purpose. In the original, you had to approach a ramp at full pelt to fly off and collect it before hitting a flowerpot that dampens your fall. Doing the same in Banana Mania causes you to overshoot, flying past the flowerpots and off the stage. Advanced 15 and Expert 18 now rely heavily on trial and error because you now slip off their numerous slopes much more easily, forcing you to hug the inside corners in a specific way. Conversely, stages like Expert 45 are now much easier to clear.

Spend more time with Banana Mania though and you’ll find the magic is still there. Adapting to the new physics and unlearning two decades of muscle memory is a fun diversion in itself, but it’s the quality of the original level designs that really elevates the game. The returning stages from Super Monkey Ball really do offer one of gaming’s finest challenges, even with less tight physics at play and modern controllers lacking the GameCube analogue stick’s eight direction locking gate.

While the levels included from Super Monkey Ball 2 don’t reach the same level of perfection as its predecessor, they remain fascinating to play. By opting for wider, more architecturally expansive boards, Super Monkey Ball 2’s focus on puzzle-like gimmicks waters down the pure challenge its predecessor offered in favour of a reliance on trial and error. Levels like “Launchers”, “Reversible Gear” and “Arthropod” are among its worst offenders, mandating brute-force restarts until you’ve memorised being at a very specific time, place, or a combination of the two.

Banana Mania’s shift away from its source material’s arcade-style lives-and-continues structure has mixed effects. Collecting bananas now becomes pointless without extra lives to be stored, this is especially the case with the banana-filled bonus stages. The designers instead have made collecting all bananas an optional goal, a poorly judged idea that conflicts with the size of many stages and the limited time you have to clear them.

A more successful addition is the extensive online options that nicely complement the spirit of the game. New time trials with global leaderboards give you the ability to face off against other players’ ghost data, an easy way to learn new tricks and better your own game. While publisher SEGA’s decision to take the original soundtrack and make it DLC is as cynical as it sounds, the all-new background music is pretty good, featuring fine arrangements of the original music alongside well-fitting new compositions that fit the tone of each of the game’s world themes.

Considering the above additions, as well as a bunch of unlockable game modes and a brand-new visual style, Masao Shirosaki and his team can’t be faulted for a lack of effort with this remake. Doubly so considering how difficult it must have been to rebuild three twenty year old games on the Unity engine.

And yet while Unity was likely chosen due to the various circumstances behind modern multi-platform games development, its adopting has clearly had its cost. In addition to an off-kilter game feel, Banana Mania also makes several graphical compromises over the original games. Objects like Bumpers and bananas pop-in where they didn’t before. Shiny polished surfaces now unconvincingly reflect a rudimentary static image instead of everything around them. Porting the original game engine and expanding upon it would almost certainly have led to a more faithful experience.

All things considered, Super Monkey Ball: Banana Mania just about recaptures much of the Super Monkey Ball magic. It remains fun, inviting, and still serves up the same fiery challenge from one of the best concepts in video games. But we cannot overlook that it falls short of its perfectly tuned forebears, which are now also over two decades old. If you happen to have an old GameCube or Wii knocking about, those older releases still remain the best way to play.

Super Monkey Ball: Banana Mania is out now on PS5, PS4, Xbox One, Switch and PC.