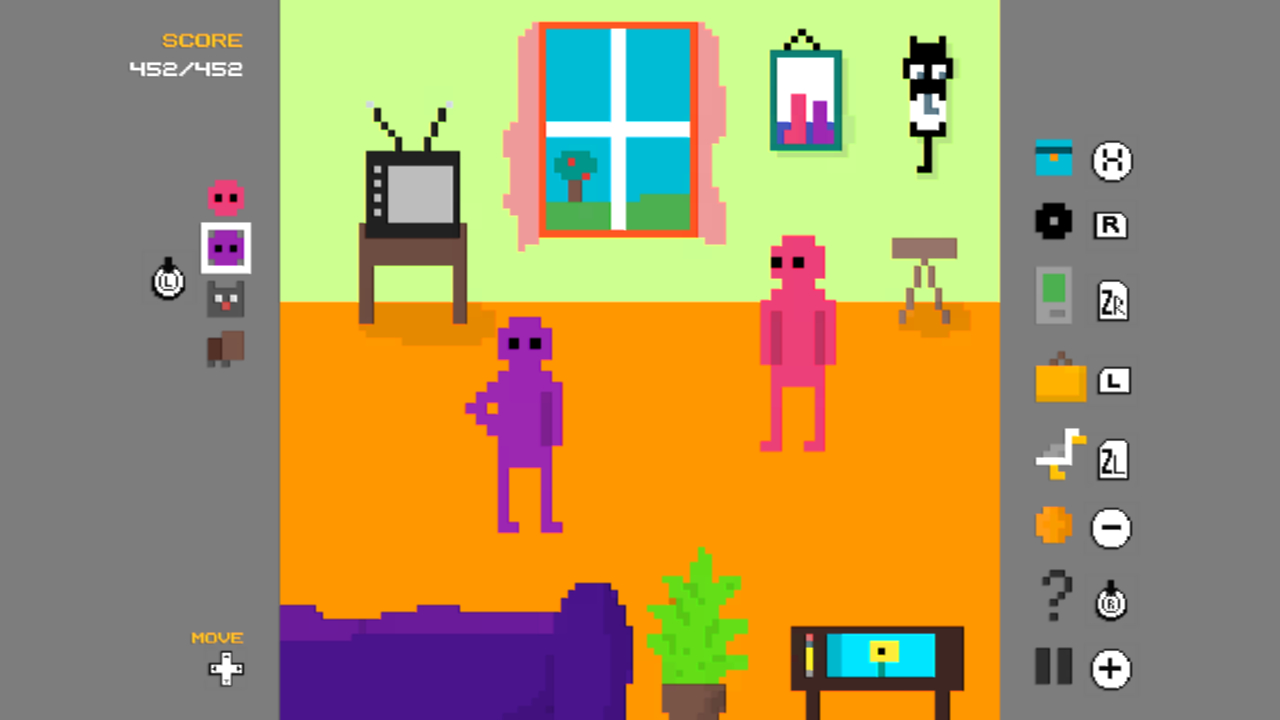 Surrealism is tricky. When done correctly, nothing is better at hitting those emotional centres of your brain. When done poorly, however, it can seem random, disjointed and silly. It’s the difference between David Lynch and a film student’s attempt to be David Lynch. Tux and Fanny is a surrealist adventure game, derived from a 2019 film. One that mixes forms, genres and ideas. And it hits more than it misses.

Tux and Fanny is, on the surface, an adventure game about trying to repair a deflated soccer ball. Tux and Fanny, rendered in MS-DOS-style chunky pixels, walk around the map, collecting objects, combining them and jumping through various hoops to eventually navigate towards their aim. Anyone who has played something like Monkey Island will get the gist.

Rather than colour in the game with wit, as many adventure games try and do, Tux and Fanny colours its world with a mix of melancholy, dark humour and an uncomfortable, unsettling atmosphere. Your mileage may vary, but I found myself totally taken with the tone, drawn into the game’s strange world.

All this wouldn’t work if the gameplay fundamentals weren’t sound, though. Finding objects and digging through the world is satisfying as you unlock new and bigger areas. It also introduces a touch of WarioWare, with lots of mini-games boasting unique mechanics and art styles that unlock new areas and items.

Some of these mini-games are simple and quick, while others are more involved. A dentistry-themed match-three puzzler is a highlight, as is the synthesiser. The occasional dips into 3D or claymation also keep things fresh. There’s a great bit where you fight a fly, but saying any more would spoil the sense of discovery.

We were constantly surprised at how detailed, involved and large the world was here. Areas kept opening, and we completed the game after about 4 and a half hours, discovering only around half of what was on offer, There’s loads to do, from collecting bugs and plants to completing mini-games and partaking in optional quests.

It’s easy to look at Tux and Fanny, hear its eerie soundtrack and Russian voices and think that it may be an art piece. We’ve seen many an arty game that forget to be an enjoyable experience to play. Tux and Fanny deftly avoids this trap.

Tux and Fanny isn’t interested in being opaque for the sake of it, either. It doesn’t waste your time. The inventory system is intuitive, and common items like the record player and the computer can be constantly accessed with a keypress. There’s also a hint system and an entire strategy guide stashed away. This game wants you to find secrets.

Things aren’t all positive. Movement can often be annoying – the D-pad is used as default, while the analogue movement is sometimes off. Anyone who owns a Switch will baulk at that. Like all adventure games, some solutions to some of the puzzles can be obtuse. But none of these criticisms stopped me from having a good time.

Tux and Fanny isn’t for everyone. Its humour, graphics and strangely oppressive mood will put some people off. But if you want to play a video game where you can control a flea or a worm as it squirms out of an anus, Tux and Fanny will be for you.

It’s games like this that make us thankful that the price of entry onto consoles have come down, resulting in all sorts of weird, varied and arty stuff on the console storefronts. Tux and Fanny is personal, offbeat, and a lot of fun.

Tux and Fanny, from Ghost Time Games, is out now on Switch.