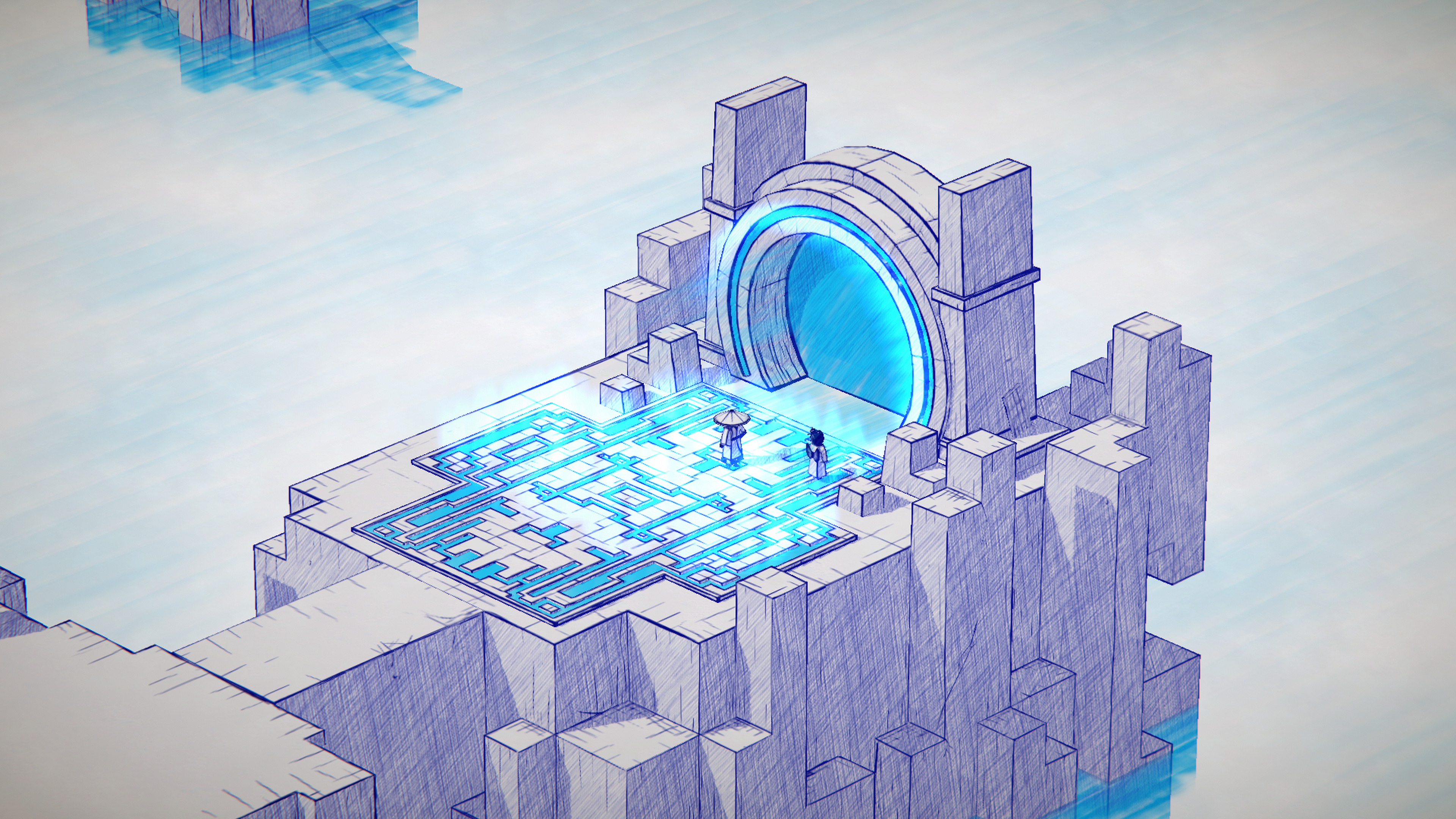 I’ve always had an appreciation for artwork created using ballpoint pens. I think this comes from the fact that they’re simple, everyday, items. Ergo a reminder that striking art can be created using even the most basic of writing implements. Puzzle adventure Inked: A Tale of Love taps into this, featuring isometric levels with a sketchbook art style where colour is used sparingly. It definitely helps to draw you in, pun not intended.

You play as an ageing nameless samurai ready to retire and enjoy a quiet life. No sooner than putting his sword away, he discovers the local wildlife is being injured, prompting a journey to find out who’s responsible. The hero’s long-time companion Akio tags along, helping wherever she can.

Our hero is blessed with the ability to ‘redraw’ objects, including blocks, bridges, and ramps. These are then used to traverse various oriental locations and solve puzzles, using blocks to fill in gaps in structures and creating paths for balls to roll along.

Later puzzles feature elements such as wind, water, and fire, all of which must be harnessed accordingly to progress, such as using fire to burn wooden structures and guiding water to create icy platforms. There’s plenty of traditional block shoving, platform raising, and switch flicking too.

There’s no combat whatsoever – the focus is solely on puzzle solving, with the occasional cut-scene to drive a story entailing love and loss.

While the occasional puzzle may require some experimentation, most are relatively straightforward, housed within a single screen. Coupled with no punishment for failure – or even a Game Over screen to speak of – this is a surprisingly relaxed experience; one that asks for no more than 2-3 hours of your time. Hidden collectables are there for those looking to revisit after completion.

This isn’t an entirely frustration-free experience, however. The isometric perspective can occasionally obscure vital objects, and there are a couple of instances where it breaks its own rules. Playing on Xbox One, the controls aren’t entirely intuitive either. There were lots of instances where I accidentally grabbed the wrong item, prompting puzzles to be started anew.

More damaging is that the collision detection is largely unpredictable. Right to the point where I was able to completely stroll through two puzzles, bypassing them entirely.

This Xbox iteration has one last caveat – despite being available on both PSN and the Switch eShop as a standard release, it has launched as a Community Game. This means no achievements, and more crucially for the developer, reduced store visibility. We can only assume the team hit a snag when it came to getting the game onto Xbox, and this was the only means to getting it onto the platform.

Regardless of minor technical hiccups, Inked: A Tale of Love is ideal for a quiet afternoon. While the puzzles may not leave you perplexed for long, the story’s themes will likely leave you with something to think about after the credits roll.

Nuverse (Hong Kong) Limited’s Inked: A Tale of Love is out now on PS4, Xbox One (tested on Xbox Series X) and Switch. It first launched on PC in 2018.

SCORE
7
Inked: A Tale of Love