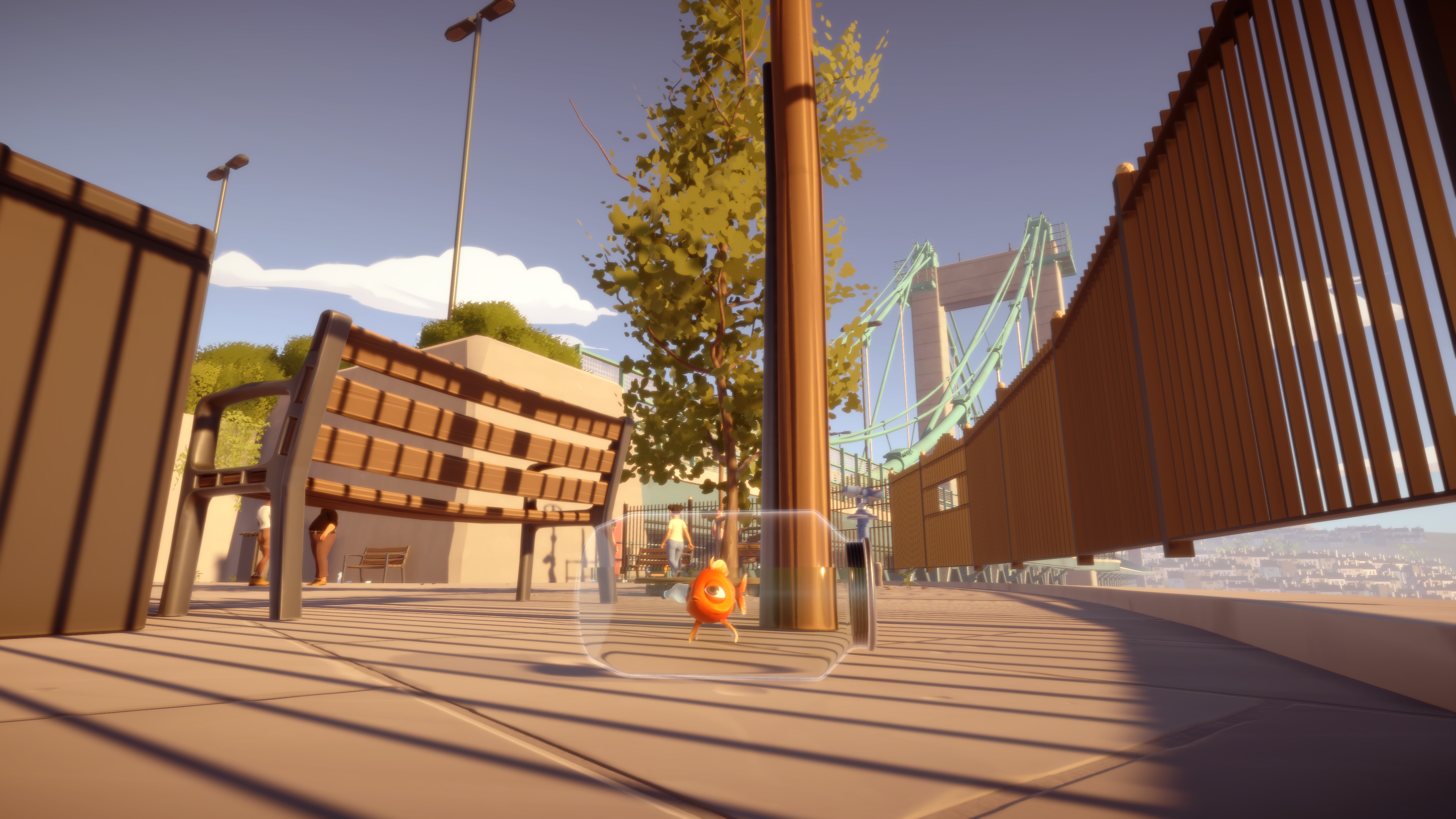 Remember the scene in Finding Nemo where the clownfish and his newfound friends find themselves trapped in plastic bags following a daring escape? Bossa Studios’ I Am Fish takes that idea and runs with it, being a physics-based adventure in which four fishy friends – separated from a pet shop – attempt to escape from their cramped spherical prisons and reunite in the ocean.

The four fish are of different species, and consequently, their respective stages play differently. The goldfish’s stages act as a tutorial, teaching the basics and letting you become acquainted with the physics engine. Unlike Bossa Studio’s previous works (I Am Bread and Surgeon Simulator, both of which are referenced here) the physics are well-grounded – the water within the various ‘vehicles’ under your control, whether it’s a sealed jar or a janitor’s mop bucket, feels weighty, sloshing from side to side. Momentum builds in a realistic manner too.

Super Monkey Ball is the nearest comparison we can make, but even then, it’s far removed. When rolling around in glass capsules, a couple of knocks can be withstood before breaking. If a method of transport tips over, or you simply become beached, a few precious seconds are given to flip and flop back to safety.

Although stages are ranked, there’s no penalty for respawning and it’s even possible to skip sections entirely if they’re starting to vex. Showcasing simple but effective design, glowing checkpoint makers indicate the path ahead, and they’re proficiently placed.

The pufferfish introduces the ability to roll, while the piranha can grab and chomp objects – handily, anything that can be interacted with is colour coded. This leaves us with the flying fish, which can become airborne for a few seconds. These stages are the trickiest, and not just because of the inverted flight controls – being able to fly gives greater scope for movement, ergo losing track of the next checkpoint, and it can be challenging to nail landings. It’s very Pilotwings-esque in places.

Each fish has three stages to play through, which may sound stingy until you realise how long they are. The majority last around fifteen minutes due to their scope and scale, taking the aquatic chums across rooftops and into litter-strewn sewers, ponds and lakes, city streets, a bustling British outdoor market, and a few other completely unexpected locations. The focus on quality over quantity also results in each stage feeling remarkably different from the last, with few ideas or locations reused.

Some sections call for precise movement, gently nudging the corners of the bowl, while others are exhilarating rollercoaster rides, temporarily taking control out your hand while propelling your hapless fish over great distances. Dodging traffic is likewise exhilarating, especially when rapidly accelerating downhill. Only the cavernous mine shaft stage left a bad impression, feeling bit too spacious and long-winded for its own good.

Even before reaching the final hurdle, I Am Fish feel like a genuine journey, with the four fish surviving all manner of hazards and going to great lengths to reach the ocean. The presence of a world map adds a certain something too, showing how far they’ve come.

This cinematic quality extends to the visuals, which are surprisingly slick, almost having a CGI appearance. When rolling around the rooftops the scenery stretches way into the distance, while the woodland locations are dense and lavish. Take a few seconds to look around, and you may spot some pleasingly small touches.

Not everything is glowing in the presentation department, though – the music is often ill-fitting. Given that most locations have ambient sounds, such as bird song, it’s debatable as to whether music was needed at all.

Poor music is the only blight on this otherwise shining package. For a relatively simple physics action game, there’s a lot of creativity and imagination on display, resulting in something that won’t be forgotten soon. And there isn’t a horrible stringy poo in sight.

I Am Fish, from Bossa Studios/Curve Digital, is out now on Xbox One, Xbox Series X/S, and PC.

SCORE
8
I Am Fish