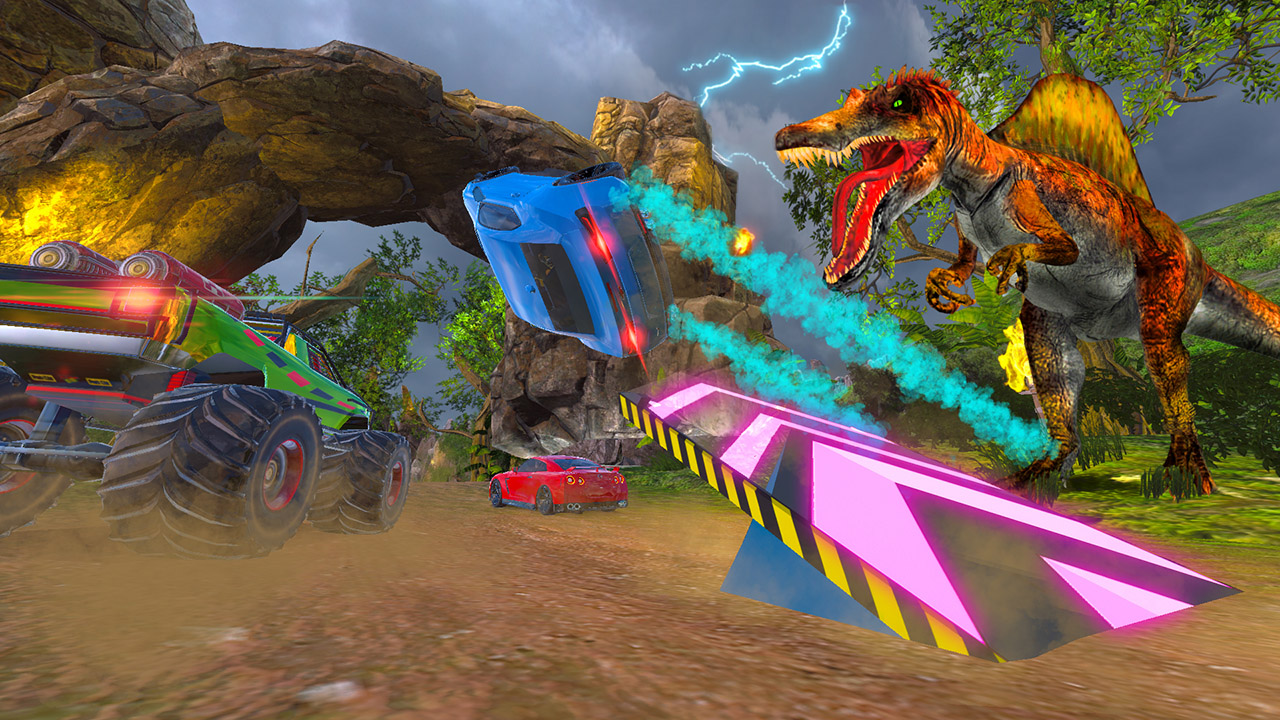 You’ll know exactly what to expect from brand new arcade-to-home port Cruis’n Blast just moments after firing it up for the first time. This is a game that unashamedly revels in its garish demeanour, its flashy presentation and wild vehicle line-up accurately setting the tone for its racing, where the difference between a first place and second depends on how equally flashy your driving is.

Simply put, each course in Cruis’n Blast is jam-packed with opportunities to pull off stunt tricks, be it through massive structures to drive off, a litany of ramps, or long, winding turns. Double-tap the drift or accelerate button and you’ll perform the equivalent of a wheelie – gaining a little speed. Do the same before one of those ramps, or even next to another car, and you’ll perform a wildly impossible stunt, gaining a speed boost in the process.

These speed boosts – and your limited nitrous – form the basis behind the ‘Blast’ in the game’s name, and being able to chain as much of them together on your way to the finish line is integral to victory. The sheer immediacy of the game’s handling leaves you open to zip left, right and centre across the game’s courses, rinsing them dry of speed boosts.

It can certainly make for some thrilling races. AI opponents at the back of the pack are more prone to making mistakes – say, by missing a few boost pads or taking the slowest route when there are many. But by the time you make it to the front of the pack, it’s much less likely that you’ll be handed pole position on a plate.

It’s in these close jostles for first place where the game really shines, where victory may well depend on whether you pulled off that mad backflip stunt off the racer in third place, zipping you over to first just in the nick of time.

And yet the fickle nature of the game’s stunt-dependent victories, combined with its easy-going handling model, can also leave the driving feeling one-note and unsatisfying. Cruis’n Blast doesn’t have the sheer unpredictability of say, an older party-focused racer like Mario Kart Wii, while at the same time the game’s handling model is easily mastered.

On the game’s Hard and Extreme difficulties this can be an issue when races will play out very predictably under your thumbs, right until the final kilometre stretch where that mad rush for first place happens.

The designers might have been aware of this because they did – rather smartly – hide three hidden keys across each course. But again, this has its own caveats – sometimes these keys will actually be hidden across slower routes, so collecting them isn’t always in your best interest. A secondary mode that tasks players with collecting all three keys and winning may have been a better idea.

As with the game’s emphasis on outrageously impossible stunts, the courses you race through also do their utmost to excite. There is a thrilling dynamism at play that gives each of the game’s locales character. In London, you’ll find the famous sightseeing attraction the London Eye rolling down the city streets. Meanwhile, over at Death Valley, an earthquake tears apart the entire course, swallowing an airfield of planes while you land your vehicle from a jump above.

These disasters are mighty impressive to watch when they unfold. But they also don’t pose a credible threat to your vehicle, triggering far enough in the distance to spare you and your opponents. This extends to nearby occurrences of a similar ilk – an invading UFO’s laser beams in the final tour don’t affect your vehicle even on direct impact – it might as well not have been there. Fail to make it across a giant chasm and you’ll land safely anyway, albeit awkwardly in mid-air.

Cruis’n Blast’s courses generally contain all the good stuff for pulling off stunts – multiple routes, plenty of opportunities to get drift boosts in, and lots of verticality. For this home release, developer Raw Thrills has expanded the roster of tracks from five at the arcade to almost six times that, with some of them being similarly designed variations of the arcade originals.

The quality of the conversion to the Nintendo Switch is impressive. Despite the original arcade game running on much more powerful hardware, this home version still retains the copious amounts of shaderwork that give the locales and vehicles their character – basically the appropriately shiny appearance. Whether it be the glass buildings of night-lit Singapore, an old London bus, or the water around Madagascar, everything features a pleasing sheen that looks fantastic when combined with the sheer speed of the game.

It’s even more of a feat when you consider it appears to be running on Unity, yet the programmers at Raw Thrills managed to avoid nearly all the bottlenecks that we’re used to seeing from console games running on the now-prolific engine. Control input is extremely responsive, there’s no stuttering when fetching assets, loading times between courses are very short, and the visuals run smoothly – for the most part.

Irrespective of what you make of Cruis’n Blast’s loud exterior, it does what it sets out to do with appreciable sincerity. Developer Raw Thrills has crafted a true-to-the-arcade racing game that just wants to have fun and invite you along for the ride. It’s just a shame its shallower trappings endanger its long-term appeal.

Cruis’n Blast is out 14th September on Switch.