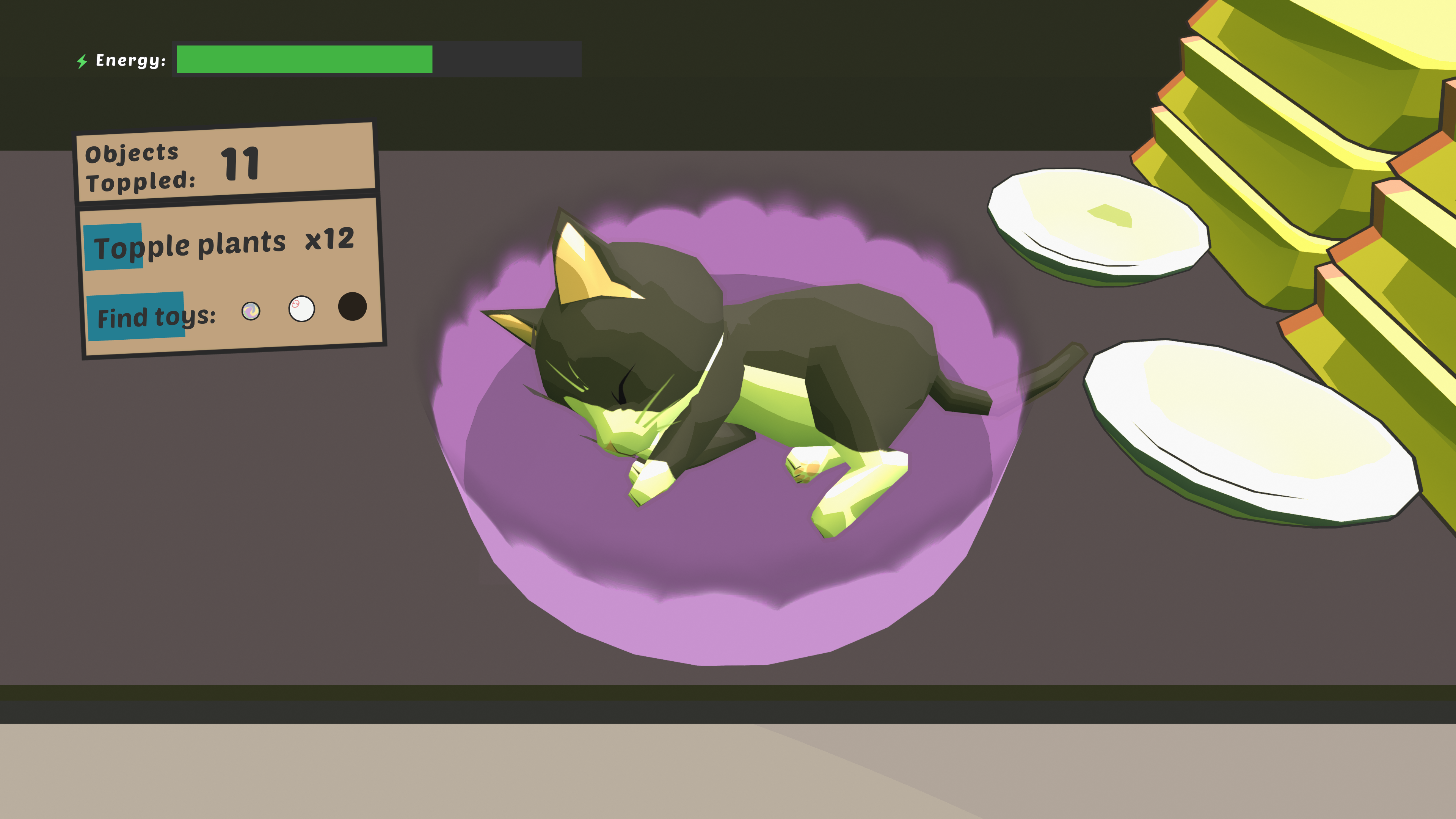 Essentially a cat simulator, in a similar vein to the equally daft Goat Simulator, Catlateral Damage: Remeowstered entails making a mess in various households – in first person – before letting your chosen kitty run riot in a supermarket, a museum and a few other spacious locations. If you’ve ever returned home to find your beloved feline has had a ‘funny five minutes’ and wrecked the joint, you’ll undoubtedly relate to the antics Catlateral Damage has to offer.

Rather than simply let you cause chaos and destruction, each stage features a small list of objectives to complete. These vary from catching mice and moths, to seeking out cat toys, or breaking a certain number of precious items such as vases. If this sounds like a simple premise, that’s because it is.

Every single action – from jumping to knocking items over – drains a smidgen of energy from a gauge located at the top of the screen, governing what’s possible to achieve in a single run. Initially, you’re required to put thought into the proceedings, working out the ideal path to reach a high ledge or making a beeline to the most expensive household items to clear a destruction-based objective. The first few locations are so heavily governed by the gauge that it takes a few attempts to tick every objective off the list.

But like a cat’s claw caught on a woolly jumper, everything starts to unravel. Surprisingly quickly, too. Upgrade tokens can be easily found, and the upgrades themselves are inexpensive. Within almost no time at all, your kitty can be given the ability to double jump, dash, and supercharge their swiping arms.

After just an hour of play, we had given up thinking methodically – the upgraded gauge mitigates the need to think tactically, letting you frantically dash around the place and leap to high ledges without hassle. Later locations also feature more opportunities to catnap and eat – the two means of restoring energy.

Although the later stages feature an impressive amount of items to topple, with the aisles in the supermarket full of fruit and veg to send cascading off display stands, Catlateral Damage is light on surprises, and there’s nothing here that could be considered clever. Take the task of knocking over a colossal dinosaur skeleton as an example. This could have been achieved by climbing high and knocking over support pins, requiring thought and preparation. But no – it’s a simple case of walking up to it and bashing the swipe button.

The levels become bigger, but the objectives remain the same throughout, never evolving into anything more than toppling things over or seeking collectables.

Catlateral Damage isn’t going to test your gaming mettle, and that’s something hard to ignore. The only challenge comes from tracking down items, some of which are tucked away. If you’re the kind of gamer that loves looking for hidden collectables, you’ll probably be in your element for the 2-3 hours it lasts. Aside from very young gamers, I’m not sure who else to recommend this to.

The kindest thing I can say is that the wanton destruction is catechetic. Well, that and the fact that the presentation – which features photos of people’s kitties – is bright and appealing. Sadly, pet photos aren’t enough to save it from obscurity.

Catlateral Damage: Remeowstered is out 15th September on PS4, Xbox One, Switch and PC.