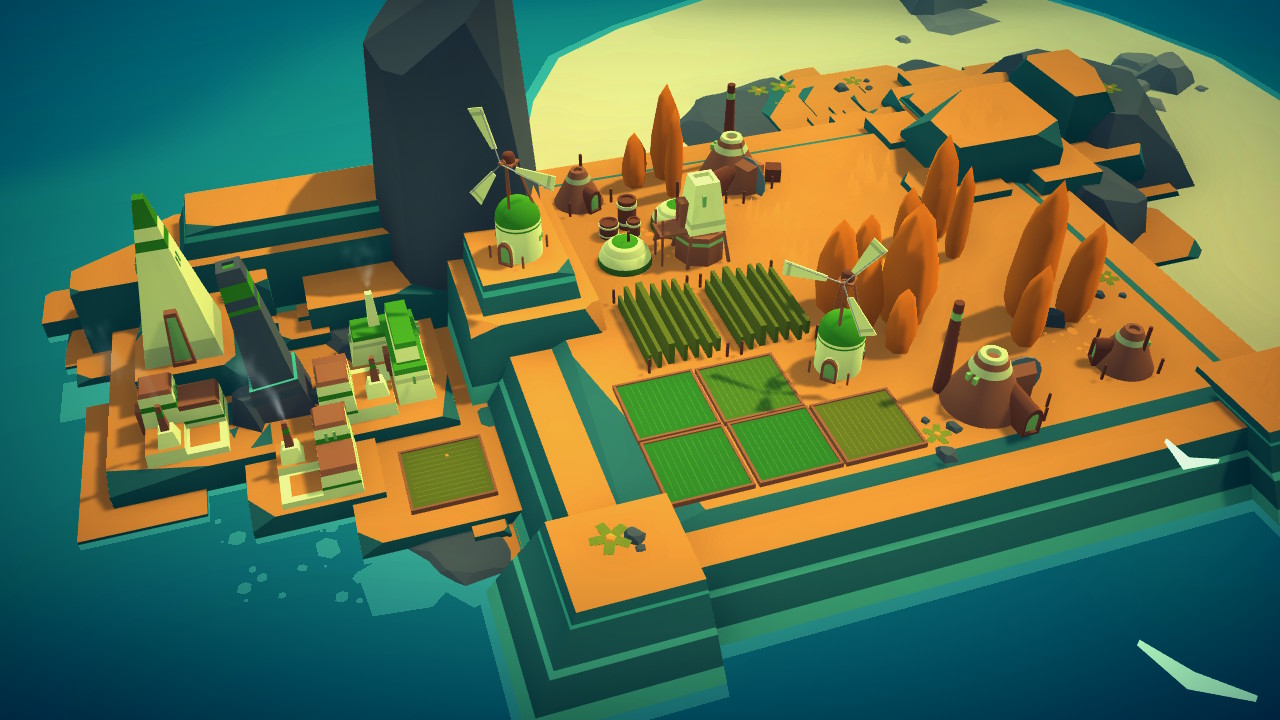 You start with a procedurally generated island, a beautiful little thing, to survey, to see how things might play out. Pick one of a choice of two themed packs of buildings (farming, city, lumber, etc), and place them to score enough points to get another pack, then repeat until you run out of buildings or earn the option to do it again on a fresh island.

The game makes what could be quite a complicated scoring system completely transparent. Points are allocated based on the proximity to other buildings, which is intuitively conveyed as you sweep your building over the landscape, with a reminder of that building’s stats in the top corner. There’s no time limit, or even an undo button. It couldn’t do more to help you maximise your points for each building.

That doesn’t mean that it’s easy to get a high score though – that’s where a bit of planning and forethought comes in. Other buildings within a radius contribute points positively or negatively – for example, houses like being near other houses. Houses also like being near circuses – but mansions don’t. Mansions also dislike being near walls. But it’s not necessarily symmetrical – walls do like being near mansions. Add the fact that the radius varies by type of building, and the order in which you place buildings becomes very important.

This all comes with a bit of practice, but because it’s not spelt out in a tutorial, you feel clever for working it out. And there’s no frustration as you learn and fail – a run to a high score will involve several islands, so starting from a bare landscape is a normal part of the game, not a punishment for failure. The only punishment is your score being zeroed.

Having started life on PC, the controls are perhaps inevitably a touch awkward on console, but not to any damaging extent. And it runs beautifully on Switch – handheld seems to suit it particularly well, carefully handcrafting a tiny civilisation on your little island.

The lack of pressure, the transparency of the scoring – it’s designed to be relaxing, and the structure means it works equally well for short and long bursts. At first, some of the results of the points system stand out – densely packed housing, for instance – and risk the mixed blessing of trying to make a point.

But after a while, it feels closer to Tetris than a city builder, and a pleasure entirely on its own terms.

Islanders: Console Edition is out now for Switch (played), Xbox and PlayStation.