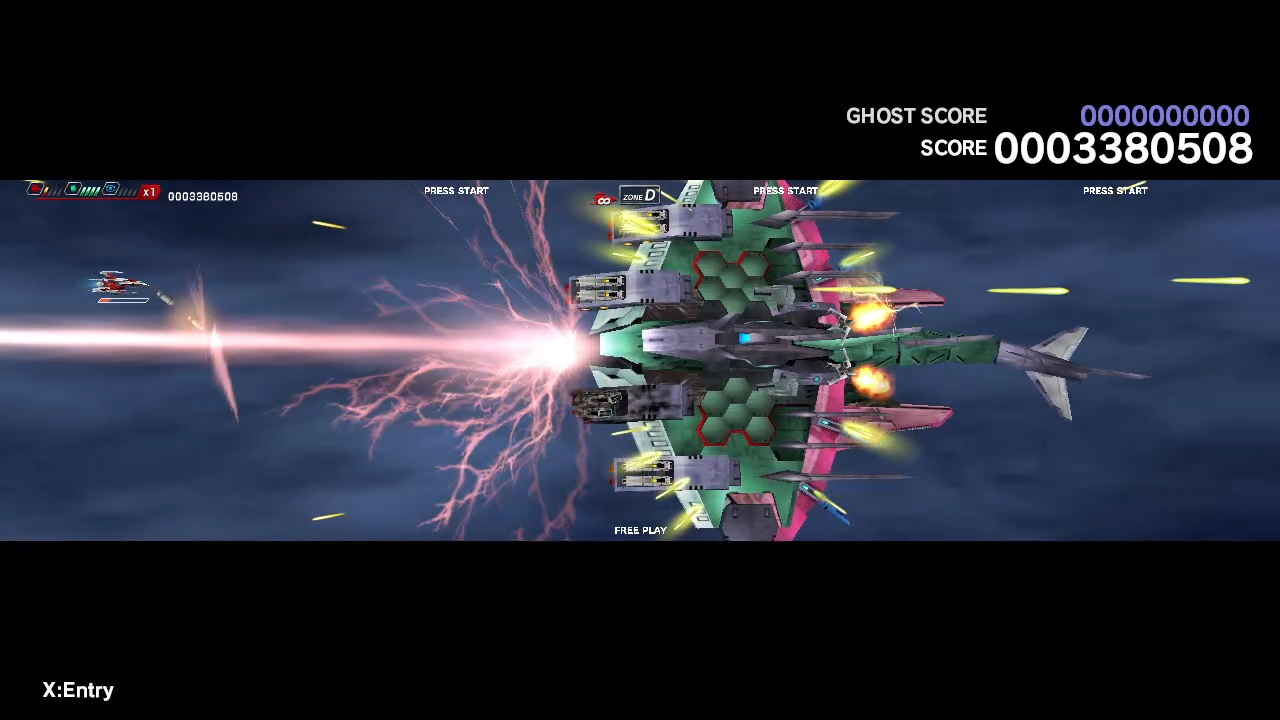 2021 seems like a strange time to release a game based on the career of Pop Idol bronze medallist Darius Danesh. Whilst he’s had great success in musicals, he hasn’t been a mainstream concern since 2002’s Colourblind…

Just wait there while I change some paragraphs. Where were we? Ah, yes.

Darius was released in 1987 and set itself apart from the melange of horizontal shooters at the time in a few ways. Firstly, there’s the score, composed by Taito’s in-house band. It leans towards the mystical, cosmic, and operatic. Then there are the enemies, who take the form of various mechanical sea creatures. You battle giant fish and shrimp. Now, normally this would cause us to sprinkle fish puns throughout this review. But we’ve grown up. Plus, we’ve already done the Darius thing at the beginning. It would be turtle-y out of order.

Dariusburst has had a long journey. It started life on the PSP, before gaining additional modes for the arcades and then gaining another update. This Switch version brings everything together. There’s the original mode where you take on levels in an Outrun-esque branching paths structure, a Chronicle mode with shorter missions, an EX mode that gives you an entirely new set of levels to complete, and an event mode with new and previously time-limited arcade missions.

Phew. That’s a lot of stuff. You can do all of this with up to four players in co-op, too.

If there’s one thing that’s great about this release, it’s how exhaustive it is. If you love Darius and are determined to conquer its systems, then there’s an endless well of stuff here. Loads of missions and a decent array of ships, all of which come with unique weapon loadouts to master.

What are those systems? In Dariusburst you can shoot and drop bombs with one button and with another (remappable) button you can fire a burst. A massive, screen killing energy laser. Bosses will also fire bursts, and you can burst into their burst to counter their burst. Bursts. They’re the big thing here. You can also detach your burst and use it as a drone friend. It lasts longer this way, and there’s a great ability to use its laser to shield you from oncoming enemies.

Levels make use of the mechanic well, with lots of nooks and crannies to hide behind. This is useful because we found Dariusburst to be rock hard. Even taking the easiest path through caused us to eat through continues like Pac-Man eats through pills.

It is still, however, fair. This is about flying by the seat of your pants, rather than learning enemy formations. Dodging, bursting and shooting until you reach the end of stage boss. There are loads of them, all beautifully and intricately designed. If there’s one reason to keep coming back here, it’s to choose another route and see which aquatic bastards await you on your journey. Each one with its own attack patterns and strategy. Each one requiring skill, patience (your main weapon is pathetically weak against these beasts) and persistence to beat.

That’s the key. Skill, patience, and persistence. It seems impossible at first, but slowly and surely you start to find tactics and strategies that work for you. You start to predict the action. To know what awaits. Just be aware that to have maximum fun with Dariusburst, you’re expected to put the time in.

This is a game that is aimed squarely at those who already know they love shooters. Very few concessions have been made to new players. There’s no hint of a tutorial, and often the game hides basics about how it functions (such as the red, green and blue powerup balls). Sure, it has unlimited continues, allowing anyone to theoretically finish the game, but using them will require you to die. A lot. And it’s easy to get discouraged.

The original arcade game also spanned two screens, and no effort has been made to change the viewpoint for console players, so you end up with huge black bars at the top and bottom of the screen. It’s not the biggest problem but it means that portable mode is so teeny weeny as to not really be viable. It’s also a not-so-subtle sign that this game is for those that loved the arcade machine.

Dariusburst reminds me of a ‘90s indie band reissuing a B-Sides collection on vinyl. It’s not the best of Dariusburst, and its price seems, at first glance, a little high. But for a certain type of completionist or fan, it’s an essential purchase. Someone new to Darius might pick it up and wonder what all the fuss is about. But for those that love Darius, for those interested in slightly offcuts or variations on the formula, this will provide hours of entertainment.

ININ Games’ Dariusburst Another Chronicle EX+ is out now on PS4 and Switch.