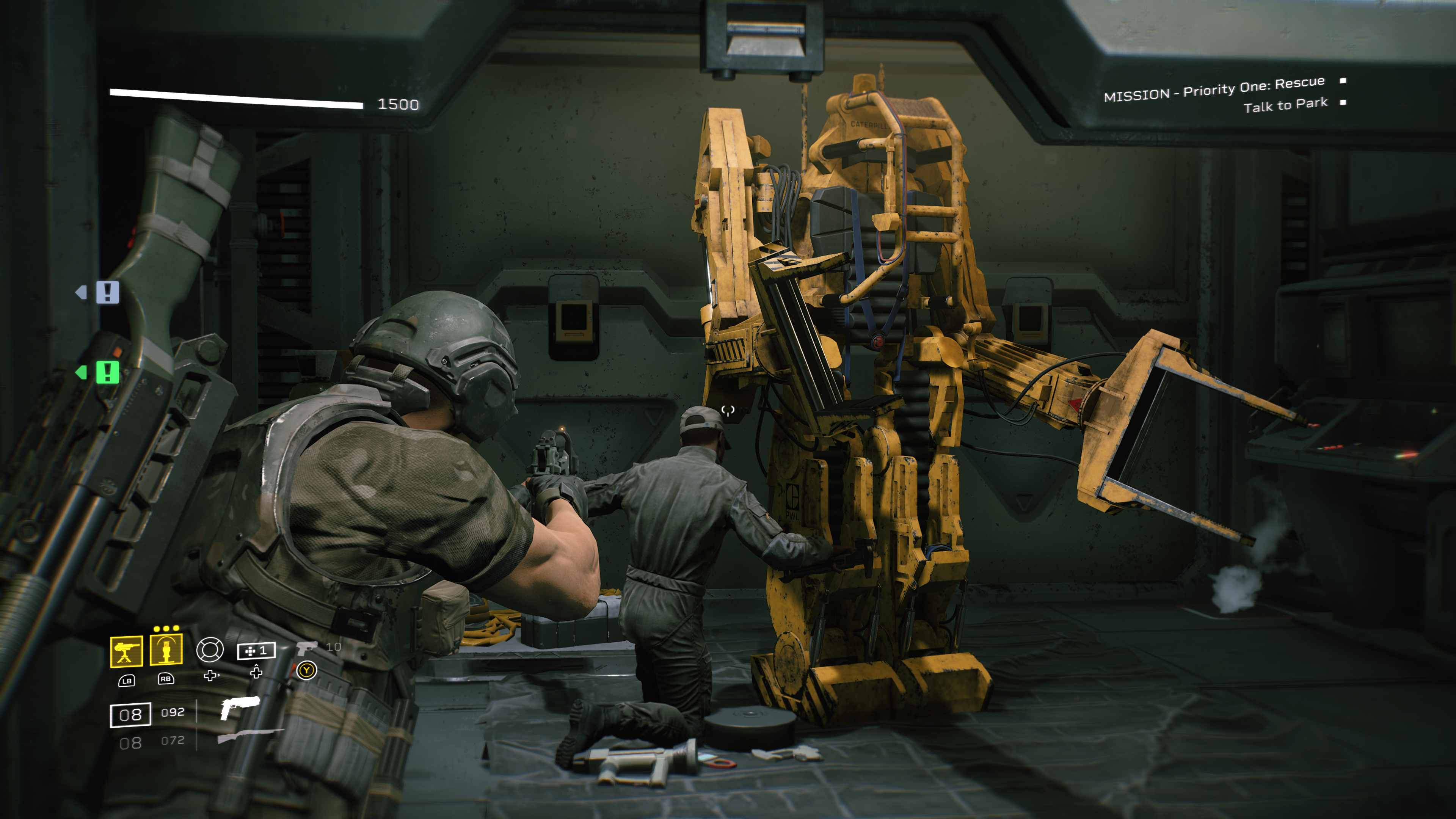 If imitation is the sincerest form of flattery, Saber Interactive should consider themselves flattered. Aliens: Fireteam Elite builds upon the groundwork laid by Saber for their belated World War Z tie-in, adapting it to fit the confines of the Aliens franchise. Like a facehugger wrapped around your windpipe, it’s a snug fit. That’s the good news.

The bad news? This is a textbook example of a third-person co-op online shooter, refusing to deviate from the tried and tested formula in any meaningful way. The best example of this is the game’s structure. After creating a burly Colonial Marine using one of the most restrictive creation tools of recent times – which is likely due to license constraints – it’s a case of bug blasting your way through familiar locations from the Aliens universe, either with two other players or a duo of pale-skinned AI (APs?) synthetics in tow.

Four chapters feature in total, broken down further into three missions per chapter, lasting a bite-size 25-30 minutes each. Throughout each, genre typical objectives must be completed, such as restarting generators, downloading logs, and summoning elevators.

Every so often you’re tasked with holding your ground, fighting off a vicious wave of Xenos and Synths with extra support from placeable turrets, mines, electric grids, and targeting drones. These battles can be tense, usually being extremely close calls, and soon a pattern emerges – almost every chapter ends with a large-scale assault. If you’ve frittered away consumable items before this point, chances of survival are slim. It definitely pays to go searching for each mission’s secret stash.

Although the AI allies are crack shots, taking down Xenos from far away, they’re rather quiet. Too quiet. They’ll inform when they’re healing or pinned down by the larger Warrior Aliens – which often linger in the shadows – and that’s about it. Every now and then an ambush will occur, which you’ll be blissfully unaware of until the final moments. That said, they’re pretty good at mopping up stragglers.

The biggest downside of their lack of communication is the impact on the overall atmosphere, leaving just the mission coordinator to alert of incoming waves and objectives. One nice touch is that if you find yourself having to replay a mission (there are no restarts, incidentally – one shot is all you get) you may notice that certain dialogue changes slightly.

Sticking with the theme of atmosphere, Fireteam Elite shouldn’t be mistaken for a survival horror adventure. It’s a thoroughly gung-ho experience, to the point where most missions throw you into the thick of it within a minute of starting. If you’re expecting long build-ups to eventual encounters, story expanding cut-scenes, and some dramatic slower-paced moments then you’d be more at home replaying Alien: Isolation. Fireteam Elite uses other means to draw you in, including the richly textured and stunningly light environments – shadows, lighting and environmental effects are all exemplarily, leading to some surprisingly realistic looking locations.

Between missions, you’re transported back to the USS Endeavor, home of the game’s supporting cast of NPCs. You’ll find them affixed to the same spot after every mission, and they may have some intel to share if you ask the right questions. Generally, though, the armoury is the only worthwhile place to visit – not much else occurs within the Endeavor from one mission to the next. It’s here that you can spend valuable currency on weapon attachments and vital consumables, with the former incrementally improving your combat rating, a la Destiny’s light.

Weapons can also be kitted out with decals and skins, which aren’t particularly noticeable in-game. There are purchasable dance emotes too – a daft touch in a game otherwise acutely po-faced.

Levelling up unlocks perks, which must then be slotted into a small grid – a set-up not dissimilar to Resident Evil 4’s inventory, making you think about what to place where. Organise blocks carefully and you may be able to sneak an extra modifier in. The number of passive skills is commendable (firepower may be increased if stood next to an auto-turret, for instance) and there’s a wide range of weapons to experiment with, including the iconic room-clearing smart gun, plus a flamethrower. The shotgun fires surprisingly rapidly, stopping Xenos in their tracks, while the magnum can cave in an Xeno’s cranium with a single shot.

The equally iconic motion tracker is a standard feature, again used not to create tension, but to merely occasionally alert of incoming Xenos. And yes, the Xeno’s make that sound when killed.

Around the halfway mark, the Weyland-Yutani Synths appear – something hinted at as early as the first chapter. They put up a good fight, with some even exploding when destroyed. They target your turrets and other ordinance more aggressively and generally make a dent in your health bar if you aren’t careful. Their arrival is well-timed, introducing a welcome change of tactics. You may even have to adjust your loadout to incorporate more electrified weaponry, stopping you from sticking to just one or two weapon types.

There are also different classes to switch between (Gunner, Destroyer, Technician and Doc), each having a smattering of high-tech toys to play around with. Cooldown times are surprisingly brief, never leaving you outgunned for long.

Once the four campaign missions are cleared – and it’s doubtful that many missions will be completed on the first run – a horde mode unlocks, and there are additional challenges to take on that bestow extra XP and rarer weapon mods. After that, well, that remains to be seen – Fireteam Elite is a small package that you’ll likely find yourself blitzing through over the course of a week or so. The fact that it isn’t yet another live service, making promises that it couldn’t ever hope to keep, is kind of comforting – within moments of playing, it’s clear what you’re in for.

Indeed, Fireteam Elite isn’t trying to be anything more than a vertical slice of the Aliens universe – a whistle-stop tour of familiar sights and sounds, which you can enjoy with a fellow bug blaster or two. It’s likely you won’t be playing it still a month from now – something the £25-£35 price tag facilities – but like a dusty copy of Aliens on DVD, you may find yourself soon coming back for more.

As a side piece to the Alien universe – a mini celebration of 1986’s Aliens, if you will – it more than suffices.