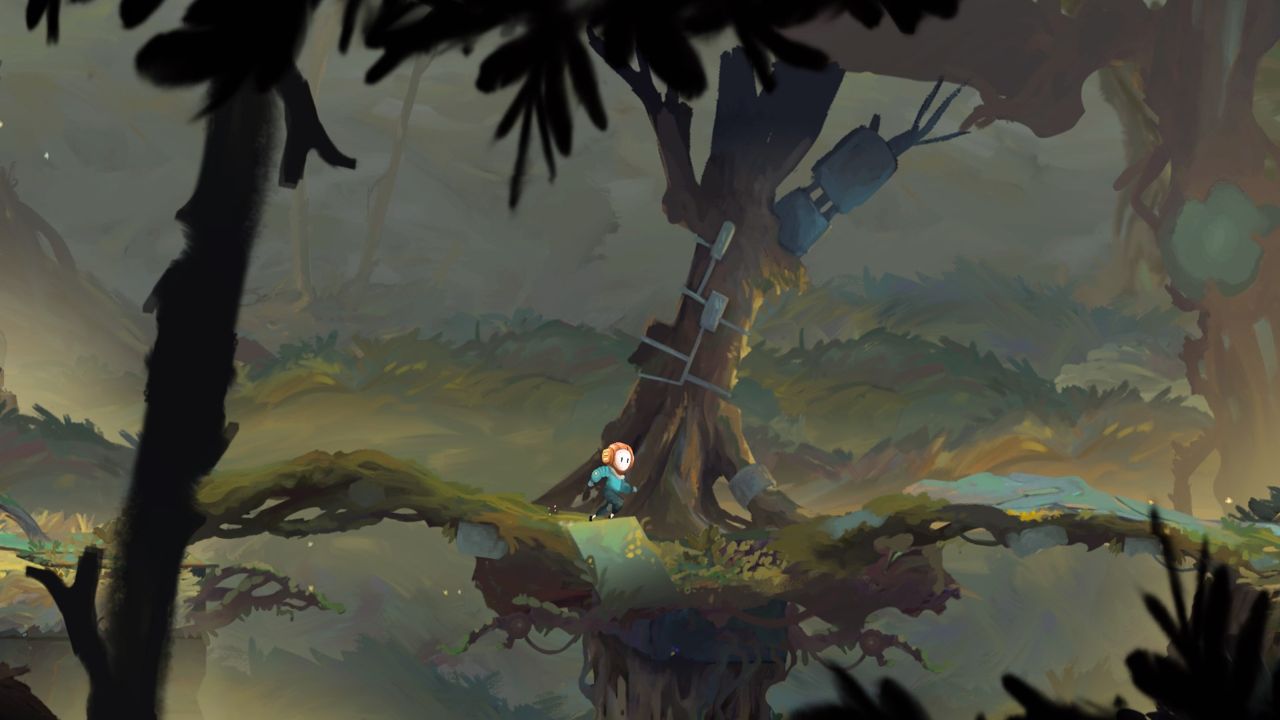 The first thing you’ll notice about Out of Line is that it looks beautiful. It has a hand-painted look that absolutely astounds, and it looks great in motion. The soundtrack, too, is eerie and subtle, picking its moments to swell without being intrusive or overbearing.

What do you actually do, though? Well, In Out of Line, you play as San, a cute little thing, escaping a factory and the clutches of evil, disembodied, mechanical hands. Luckily, San has help. At the beginning of the game, he picks up a powerful magic spear that he can throw and manipulate in order to traverse the trepidatious environments.

The spear, and its many uses, are where the bulk of mechanics lie. You can bury it into walls and use it as a springy step to reach greater heights. You can jam it into machines to use as a lever. You can attach a rope to it and throw it to create a bridge. It’s nice to see all the different variations and twists that can come from a simple idea.

Some of these mechanics work better than others. The best puzzles use the inherent design of the spear. So, digging it into platforms and using it to spring higher really works. Using it as a lever, however, just turns it into a game of pull the levers. The puzzles in these sections become generic switching puzzles and they lack the fluidity and fun that comes from chucking a spear about.

It’s all a bit conceptually muddy.

Unfortunately, our issues with the puzzles don’t stop there. We found many of the puzzles straightforward to visualise a solution to, but difficult to practically complete. This wasn’t helped by San’s floaty jump, and deaths sometimes became an exercise in frustration. To Out of Line’s credit, it’s never more than a few seconds until you’re back in the action.  We would, however, loved to see puzzles that required a bit more brainpower.

One thing kept cropping up in our thoughts while playing. And that was a vague sense of deja vu. While it looks and sounds gorgeous, the melancholic feel of the game, and its design, evokes Inside and Limbo, and it doesn’t do quite enough to differentiate itself from the pack of morbid and bleak indie platformers.

The story is told in broad strokes that aim for dreamlike, but land on vague. Some more specifics in the storytelling would help ground the action, and more character would have made the evil disembodied robot arms more sinister.

We don’t want to seem too down on Out of Line, as it’s a perfectly pleasant game that doesn’t outstay its welcome. Our playthrough lasted approximately three hours – a perfect weekend experience. Get some headphones on and set aside one or two sessions and you’ll have a nice time. Just expect your experience to be as ephemeral as the game’s plot.

Nerd Monkeys’ Out of Line is out now on PS4, Xbox One, Switch and PC.

SCORE
6
Out of Line