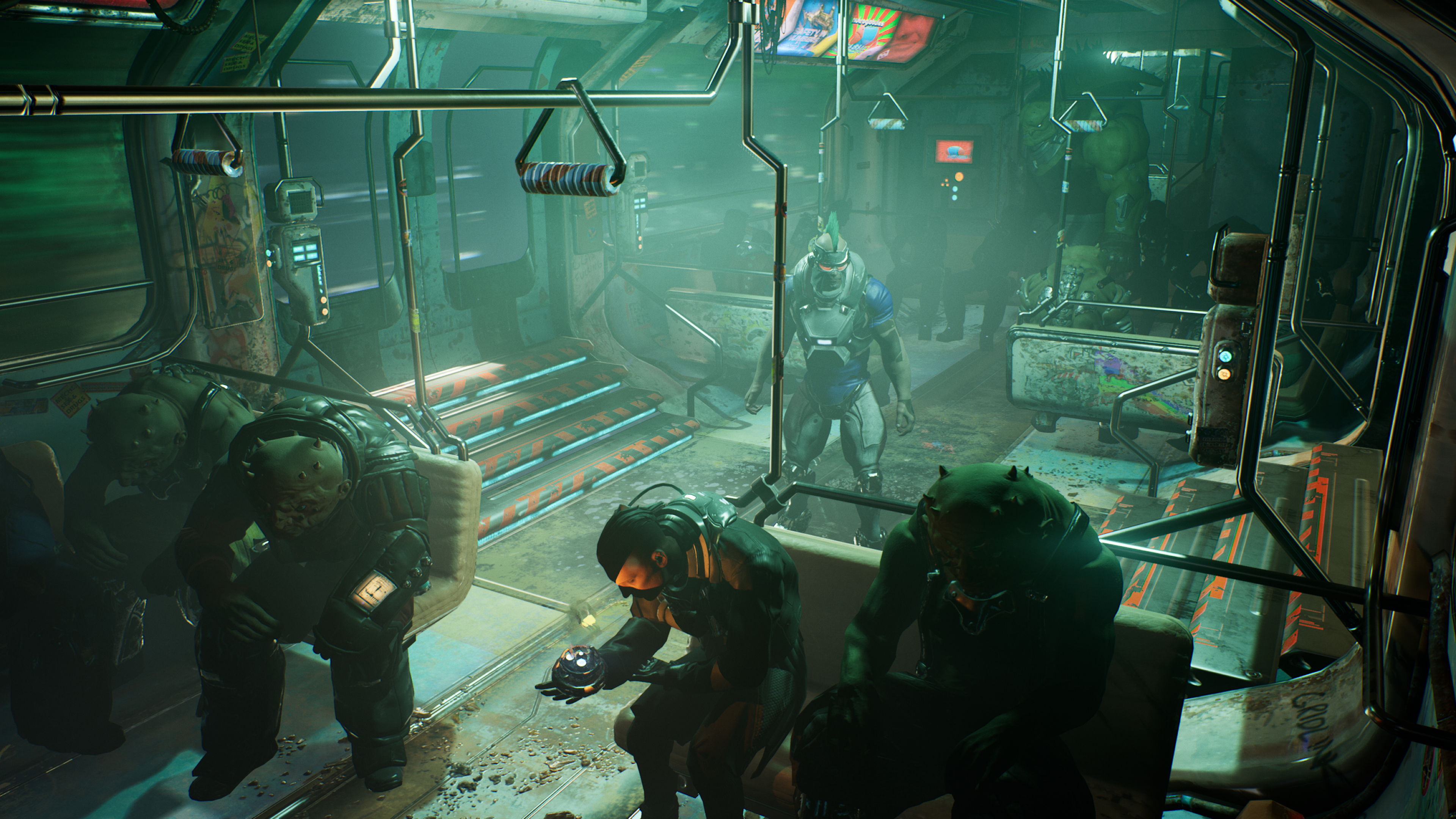 There are a plethora of reasons why a video game may be considered frustrating. Difficulty spikes and glitches are some of the more common offenders. The presence of peculiar design choices is less common, which is perhaps why they can aggravate more so than something like dim-witted AI.

The Ascent has more of its fair share of simple oversights that should have been picked up during playtesting – which could be down to the development team comprising of just 19 people – yet it also has the capacity to dazzle, excite and genuinely surprise.

This co-op cyberpunk RPG features twin-stick shooting, playing like a heady combination of Diablo III – sharing a similar perspective and pacing – and the PSN classic Nex Machina. There’s a greater emphasis on precision, being nowhere near as ‘loose’ or arcade-like as the majority of twin-stick shooters, something further enforced by a surprisingly challenging difficulty level.

There’s depth to the shooting mechanics too, giving the ability to aim high and low, as well as crouch to take cover. There’s no dedicated cover system, though, which is presumably to keep shootouts fast flowing while preventing your cybernetically enhanced dogsbody from becoming a cybernetic sitting duck.

Just to illustrate the difficulty curve further, the achievement for dying 100 times unlocked long before the story’s foregone conclusion. Especially during the introduction – detailing the collapse of the colossal global corporation The Ascent Group, and the ensuing battle to reclaim its assets – it’s vital to pay attention to the text-heavy tutorial prompts, or risk overlooking core mechanics. From there on, there’s no handholding whatsoever – it’s up to you to make educated guesses about which sub-quests to partake, for instance, keeping your current skill level in mind.

Some sections can be a vicious slog, even requiring experimentation with loadouts to progress. Healing augments aren’t unlocked for some time, forcing you to rely on health drops and (eventually hackable) vending machines to stay alive.

One area where The Ascent excels is in rewarding players in surprising ways, exceeding expectations frequently. You may have to fight your way through a slum full of hardened gang members, dying several times in the process, only to be then presented with a whole new shopping complex to explore, complete with a spectacular view. I’ve taken more screenshots of The Ascent than any other game this year. The cut-scenes are well directed too, giving the limelight to an eccentric bunch of sci-fi misfits.

Even during battle, The Ascent looks the part – explosions are accompanied by dazzling particle effects, showcasing that lustrous next-gen seen. The litter-strewn environments genuinely feel lived-in – nay abused, no thanks to overpopulation and overcrowding – and if you take a break from forward rolling around the grimy, somewhat seedy, complexes you may catch some pleasingly small details.

Despite the dystopian setting and general sense of despair, The Ascent doesn’t always take itself seriously either – it’s possible to equip comically baggy ‘MC-H Pants’ and there’s also an achievement to be had by washing your hands after using a toilet.

The stylish presentation is complemented by the codex section, featuring 3D dioramas that delve into the lore and help expand the backstory. If only the text wasn’t so small – one of the peculiar design faults is that the majority of HUD and UI elements use tiny text. Only the option to enlarge the cut-scene subtitles is provided, meaning it’s easy to miss important info – the loot drop ticker text is almost unreadable.

Adding to this, pressing ‘X’ picks up an item; holding ‘X’ equips it. This led to some fumbling early on, accidentally unequipping preferred weapons during the heat of battle.

Speaking of which, the array of weapons is surprisingly large with some erring on the experimental side. They can be upgraded using crafting kits often found by exploring building interiors, and the majority are raucous and punchy; energy weapons emit high-pitched shrieks, while sniper rifle bullets can pass through multiple targets.

Gunfights can become messy and chaotic, especially when explosive canisters are nearby, while the presence of tactical augments and mods lets you tailor loadouts. Hacking enemies and turrets – a refreshingly simple process of holding down ‘Y’ – can also have unexpected results, turning the tide while on death’s door. The only downside is that there’s no real incentive to experiment with different weapon types. You’re likely to stick with whatever firearms you’ve invested valuable upgrade tokens on.

The Ascent, as a whole, is a real curate’s egg and fascinating as a result. The mission objectives are straightforward to the point of feeling a little dated – most entail heading into a complex and downloading logs or rebooting a screen-filling server – yet other elements feel considerably fresh and modern.

At one point I was left dumbstruck how a small development team was able to create sprawling, richly detailed and heavily stylised environs, only for that illusion to be shattered by a mid-game mission reusing opening area, consequently causing the tutorial prompts to reappear. It has a 3D map screen requiring observation and logic to successfully navigate…but also battlegrounds with no health pick-ups and not enough cover. The occasional glitch takes some of that admiration away too, with one area requiring a restart.

Arriving at £24.99, The Ascent clearly isn’t being championed as a ‘AAA title’ but rather a moderately big-budgeted indie, a la Hellblade: Senua’s Sacrifice. Unlike a certain similar game, it doesn’t break a bunch of promises – I feel that Neon Giant’s has managed to achieve their vision, creating something with the capacity to surprise. But neither is it a masterclass in game design. Like a row of gears where some fail to mesh fully, the correct pieces are here but they aren’t turning in unison.

This is a game destined to become a cult classic, and I think – right now – that’s enough for Microsoft to consider it a success. A sequel, however, will need to up the ante. Some of its flaws, while excusable here, won’t fly a second time around.

Neon Giant’s The Ascent is out now on Xbox One, Xbox Series S/X and PC.