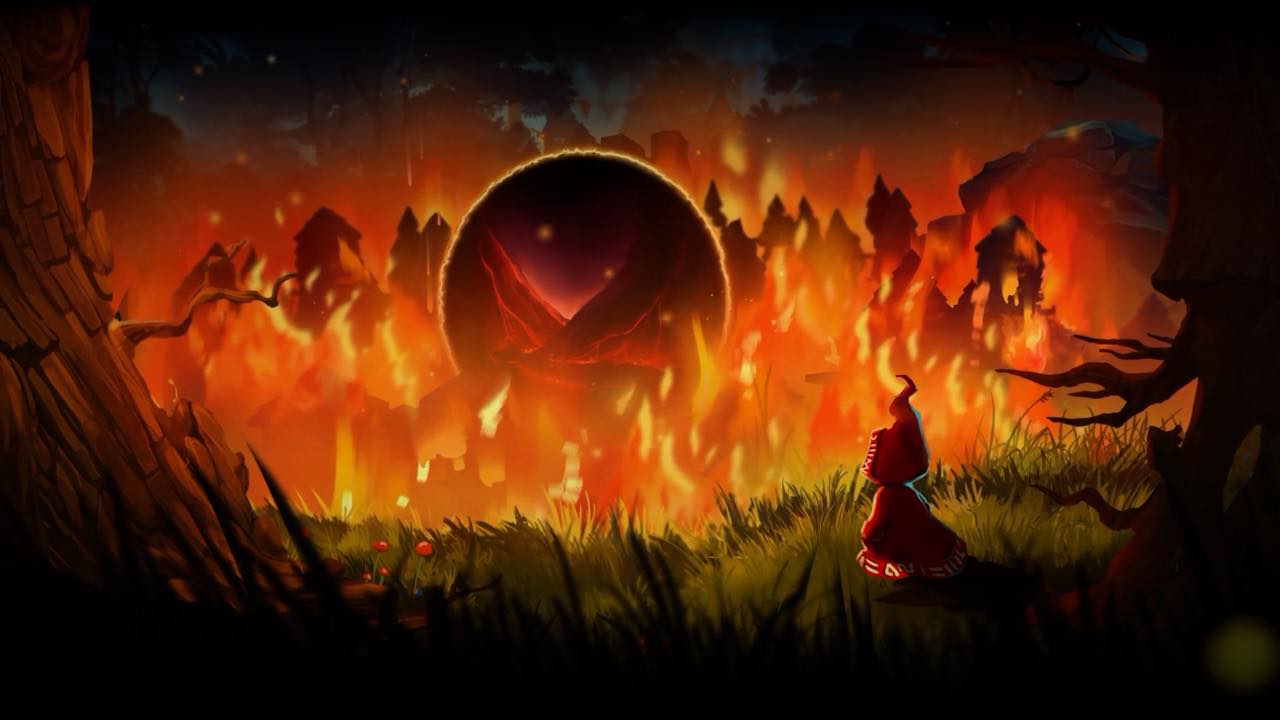 Portals have become somewhat ruined in recent years, being the literal butt of jokes for media like Rick and Morty, where the handy dimension dipping device often opens doorways into a land of giant farting butts. Thankfully the juvenile nature of portals is waning, and while we can put parping posteriors to the back of our minds, I realise we’ve also finally forgotten about cakes being lies and “This is a triumph,” in the meantime.

Unbound: Worlds Apart now finds itself in a refreshing position of redirecting games about portals. You play as Soli, a young mage about to take part in the Cleansing Ritual. Long ago, members of the tribe opened portals and sailed the Plains of Reality until they found the First World. Now corrupted and riddled with rot, the corruption is spreading and consuming all in its path, releasing demons bent on sucking the land dry and leaving a colourless void in its wake.

Cleansing the stones rids the build-up of the spreading corruption, but has to be repeated annually. Unfortunately, by the time we join Soli as the ritual begins, it is too late. Demons break through and attack the enclave, beginning their destruction of the world. Throw in a corrupted hero to act as an instigator, Soli the small mage child has the task of saving the world thrust entirely upon them.

Despite being young, Soli has the innate ability to open portals, too. This platforming adventure puts them to creative use. On Switch, hitting the R bumper opens a portal around Soli. The portal has different properties depending on the area or level you are on, but always affects the environment in largely the same ways. The landscape is beautifully rendered, wreathed in mystery, folklore and magic.

This is a platformer of the one-hit variety, where you will die instantly on impact of any offending object. It is definitely firm but fair in its difficulty, but since you respawn back at the beginning of the section it is also quite forgiving. Even though some segments took multiple attempts before being able to move on, I never felt it was unfairly difficult. Quite the opposite, I often felt a small rush of elation because sometimes the execution required can be tricky and often pixel perfect.

The portals are instrumental in overcoming obstacles and enemies but also come with their price. The small, cute, bug-eyed butterfly turns into a giant rampaging homing missile of wings and glowing eyes which will chase you down within the confines of the portal. Fireballs that enter its perimeter turn purple and charge faster making them harder to dodge. But they also have their obvious upsides of vanishing objects in your path, freezing certain enemies in place or reversing the path of an obstacle into the path of a monster.

The maps are quite expansive, with secret areas to find which offers small rewards, and it has a useful fast travel system to move between larger parts of the game.

I really enjoyed playing Unbound: Worlds Apart with headphones as I found the music and ambience enchanting – if not a bit depressing. The soundtrack is triggered by events in the world around you. The music swells and grows with tension and menace when there are enemies nearby and draws back to a melancholy line in calmer and thought-provoking moments. The world-building through the use of sound and music is exceptional and added a lot to the overall experience.

While the spiky walls, homing snapping plants and killer dragon butterflies all claimed several retries, there was one unexpected aspect that copped a body count of its own, which was the frame rate. Given the precise nature of the gameplay mechanics, it was a little bit frustrating to have the death count increase through no real fault of mine, but since there is no real consequence to dying and you respawn close to the area you died at, it wasn’t a real problem, just unexpected.

The infrequently inconsistent frame rate is pretty much the only downside of Unbound: Worlds Apart. Everything else boasts rich world-building, gloriously vibrant art, and a beautiful haunting and melancholic soundtrack, not to mention fun and engaging portal mechanics which keeps the platforming genre feel fresh.