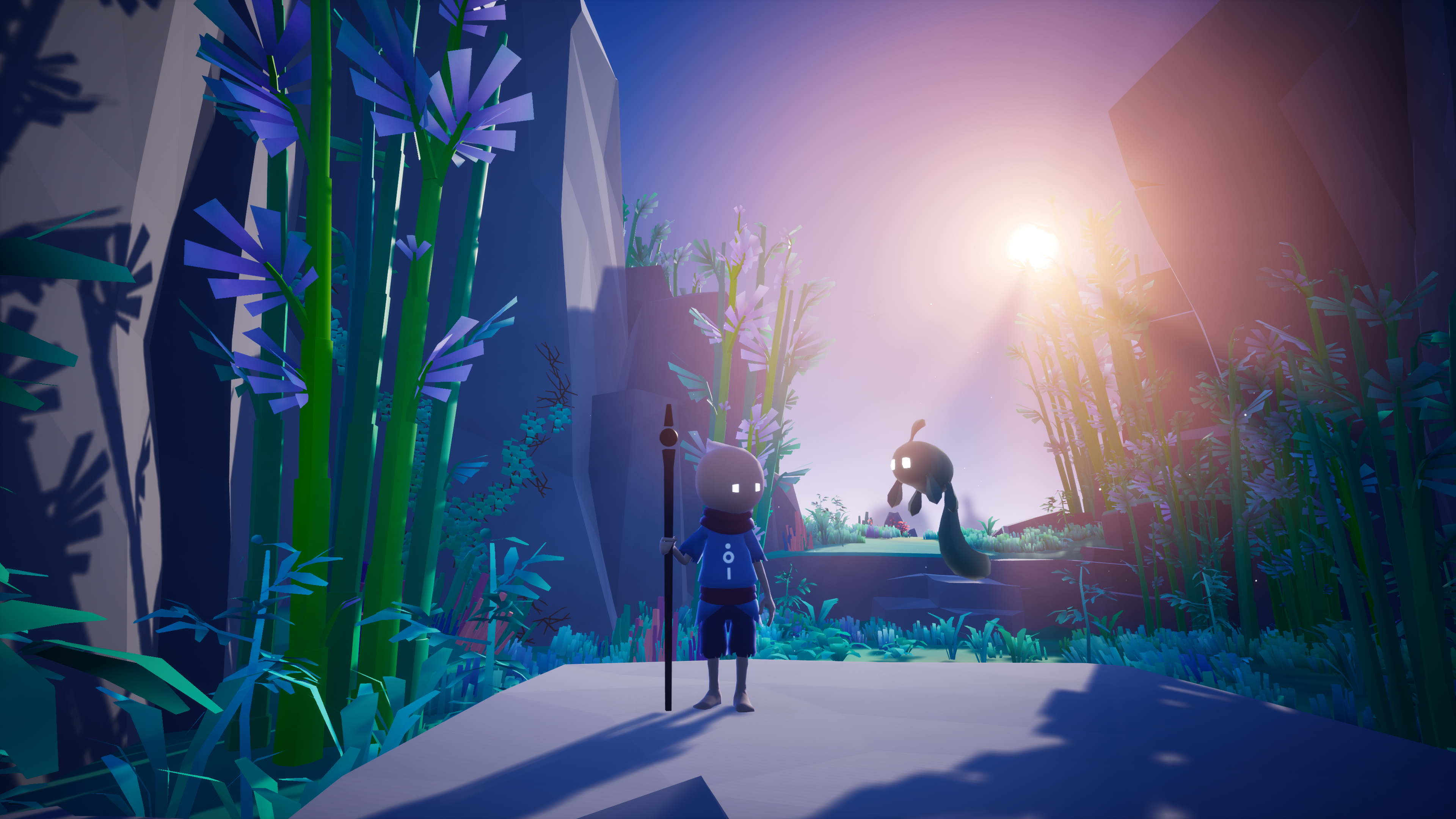 Throughout this relaxed adventure – soon revealed as a pilgrimage – our silent lead discovers the power of light. Light not only leads the path to freedom; it’s also an invaluable power source. The magical staff they possess can harness said power, duly used to energise glowing runes and other ancient devices. This ties in heavily with puzzle-solving, with each area having several to solve. In lieu of combat, this is where much of Omno’s challenge lies.

Our bulbous headed lead is accompanied by a green flying creature. Together they journey across grass, sand, and snow to follow in the footsteps of those who’ve walked this hallowed ground before them. The opening world – a dank swamp – is but a footprint when it comes to later areas, giving chance to master the basics.

Despite locations soon expanding, the structure remains the same within each open area – collect a minimum of three glowing orbs before solving a ‘main puzzle’ and travelling to the next location, usually via the help of a legendary colossal creature.

Wildlife plays quite a large part, as each alien lifeform can be interactive with – sometimes with comical results. Doing so bestows shards of light, and once enough is amassed a valuable orb can be added to the collection, bringing you closer to obtaining a 100% completion for each location. While this may sound like an arduous task, it’s far from unobtainable – the number of collectables is relatively low, making it possible to mop up everything during your first playthrough.

In addition to the pleasing lack of a HUD, it’s a real peach visually – a brilliant marriage of flat-shaded graphics, bold colours and soft lighting – and the music dramatically amplifies when new vistas come into view. Despite being mute, the mysterious lead still manages to be expressive too, with his glowing eyes able to convey delight, sorrow and everything in between.

The puzzles are just the right side of taxing; challenging, but never unpleasurable to figure out. New methods of traversal are integrated shrewdly, allowing them to grow larger in size and scale. That said, we did roll our eyes when the first ‘box shoving’ puzzle turned up, and when platforming is integrated into puzzle-solving it’s quite easy to misjudge leaps and air dashes.

As only three orbs are required to progress – and thanks to the open-ended nature of each location – not every puzzle has to be cracked. If you decide to blitz through Omno, you’ll find it an incredibly fleeting experience. However, it’s fair to suggest that people will want to spend time absorbing the wonderful atmosphere InkyFox has created, progressing at their pace. It may only take an afternoon to beat, but while it lasts it’s likely you’ll treasure every moment.

StudioInkyfox’s Omno is out now on PS4, Xbox One and PC.