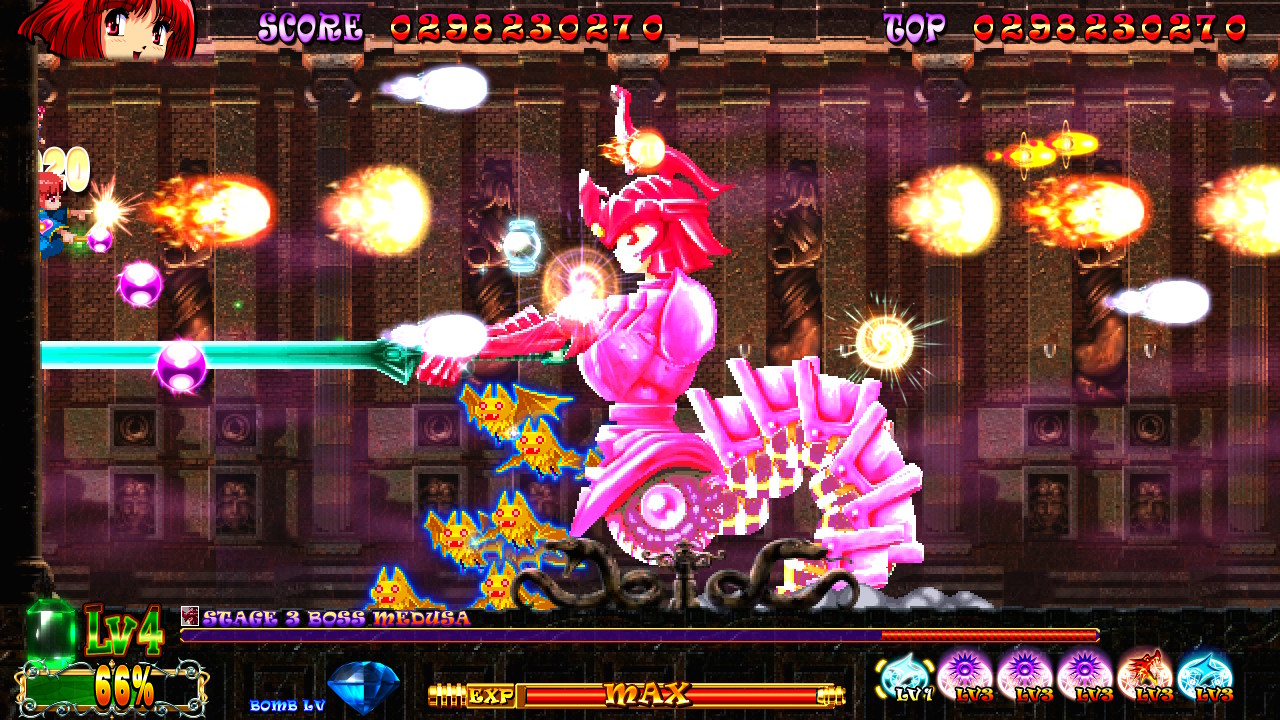 “The cult hit from Japan!”, Cotton Reboot’s box art boldly exclaims, in a statement that’s likely to garner a few winces from enthusiasts already familiar with Success’ marquee shooting game series. And yet perhaps the marketers at publisher ININ Games have a point here – if Cotton’s finally coming back to Europe for the first time in over twenty years, it’s going to need all the support it can get.

Considering the game only previously appeared around these parts on the ill-fated Neo Geo Pocket Color, this reboot has a lot to prove. Luckily, the original Cotton is a bit of a seminal game in its genre. Drawing parallels with Konami’s Twinbee series, its colourful visuals and unconventional shooting mechanics helped it stand out in an era where the space sci-fi setting was the norm.

The game’s longevity was vindicated by a long line of ports that followed the original 1991 arcade release. Versions appeared on PC Engine, Sharp’s sexy X68000 Workstation, PlayStation, mobile phones and of course, Neo Geo Pocket Color. Which of course then beggars the question: How does this attempt to reboot the series on modern formats stack up, and is it a worthy celebration of the original work?

Cotton Reboot! sees the developers dish up two different versions of the game. For starters there’s a brand new Arrange Mode with overhauled graphics, covering the reboot side of things. This is joined by Original Mode, which attempts to serve up a faithful rendition of the arcade original via a port of the 1993 X68000 version. Online leaderboards and 2- and 5-minute caravan-mode style score attacks are also thrown into the mix, catering to long term high score chasing appeal.

The original Cotton plays out a slow and methodological shooting game. Our magical flying heroine, Cotton, moves at a fixed, steady speed. She’ll fall to her doom after being struck once, and her attacks start as a tiny stream of bullets. Careful planning and positioning are required to keep her alive while the screen is filled with enemies.

Of course, you can power up your shot types, and the way this is handled by the designers remains unconventional. Large crystals form upon shooting enemies, and their colour determines what they do – either they’ll contribute toward levelling up shot power, or storing new magic spells which will get you out of tricky situations.

This is all easier said than done. As with Konami’s Twinbee and its bells, gravity makes collecting these power-ups non-trivial. As soon as one of the shiny shards appears it’ll start plummeting to the ground. You could either zoom in to grab it straight away, putting you in immediate danger or instead you can play a balancing act by shooting the things to keep them afloat, buying more time. The catch is each crystal changes type and colour with every few shots absorbed.

It’s the management of these crystals that adds a satisfying dose of unpredictability throughout the game, and is perhaps its strongest point, since it means replaying even the least eventful first stage stays fresh whether it’s your tenth attempt or the hundredth. You can’t necessarily rely on the same strategies for each run since you’re rarely going to end up with the same array of spells.

Bosses, too, are fantastic, screen-filling beasts, each one a menace in its own right. They possess plenty of abilities that are likely to throw you off guard, especially when you’re forced to focus on confronting their attacks without nullifying magic.

The X68000 version on offer here remains a beautiful game. Cotton and her enemies are meticulously drawn to the pixel and express luscious animation. Backgrounds scroll in several layers of parallax beyond the arcade original’s capabilities. Enemy designs are wild and kooky, fitting the tone of the environments and a plot that doesn’t take itself seriously. Event cut-scenes feature beautifully drawn artwork bringing the ever-expressive Cotton to life. They even bothered to animate the window borders.

Disappointingly, the designers made a few blunders along the way. The 384 x 256 resolution graphics in this X68000 version were designed to look great on old CRT displays, yet scanlines aren’t provided as an option in this port. Instead, the developers opted to pixel-quadruple the original artwork, robbing the sprites and backgrounds of extra detail that cannot be perceived when it’s all presented this bare. Worse still, missing interpolation results in constant shimmering. It slightly sours what is otherwise an excellent preservation piece of the package.

If Original Mode (mostly) offers up a faithful rendition of Cotton, it’s Arrange Mode that attempts something new. It’s here where developer Rocket-Engine, who previously worked on Trouble Witches Origin, attempts to tear up the rules and play with expectations.

The first big change comes to gravity, or the lack of it. There’s no longer a force pulling those large powerup crystals down to earth. Instead these crystals now float in mid-air, almost like shields. Having Cotton shoot a crystal still causes them to change colour, but the big addition here is shots passing through a crystal are diffused, powering up both their range and reach.

These moments provide some of the best scoring rushes in the genre – a similar feeling to raking in heaps of crowns and skulls during Deathsmiles’ volcano stage. Every fever mode shot that connects with an enemy spits out massive, screen-filling neon text, reminiscent of an attention-grabbing pachinko machine. It’s messy, sure, but never less than thrilling.

While fever mode is certainly exciting, it must be said that the regularity in which it can be activated also takes away many of the subtleties of the original game.

Since Arrange Mode Cotton starts off much more powerful and capable compared with Original Mode Cotton, dispatching most enemies is always comparatively easier under like-for-like difficulty conditions. This is exasperated by the frequency by which fever mode can be activated. As a result, every stage can almost blend into one another, since they weren’t really designed for this style of gameplay to begin with. This leaves the mid- and end-of-level boss battles to break things up, which thankfully remain as much of a threat as in the original game.

It’s clear the focus has shifted from continuous careful tactical survival over to exploiting the new fever mode scoring mechanics. Playing Arrange Mode on Hard difficulty ups the ante by increasing the number of bullets being thrown around, but this further pulls the game away from its roots – while it’s certainly a fun challenge the game also becomes a bit reminiscent of Cave shooter Deathsmiles.

That’s not to say that some of the strategic considerations from the original game are no longer valid in Arrange Mode. The crystals still introduce a delightful amount of unpredictability, also turning black and rendering them useless when their utility is expended. The teatime bonus rounds after each stage still provide a fun secret if you avoid all the falling cups, too. The attention to detail is there.

Overall, Arrange Mode does sometimes err a bit close to feeling like a completely different game, but when the X68000 version is offered alongside it it’s hard to complain at these differences.

The quality of the new presentation certainly tells us the developers had their hearts in the right place The new sprite work and backgrounds are gorgeous, the arranged music comes from esteemed composers such as Shinji Hosoe and Daisuke Matsumoto of Cave fame. Event sequences feature redrawn artwork that stays true to the original colouring style. Dialogue is fully voiced, too, and the game’s manual is even presented as a little skit between Cotton and her fairy companion, Silk. It’s rare to see this sort of effort be put into breathing new life into old games like this.

Cotton Reboot!, then, is a game of two halves. The X68000 version stands in to preserve the original arcade version’s game design, cementing itself as the purist’s choice. With good reason, too, since despite being thirty years old, Cotton remains a highly compelling shoot’em up that continues to set itself apart.

On the other hand, Arrange Mode rewrites the rulebook to deliver a completely new, supercharged take on the game that places a big emphasis on racking up huge scores during limited time windows. It’s messy, and a little unfaithful to the series’ roots, yet its presence alongside the original game makes for an effective palette cleanser.

If you’re after a quirky shoot ‘em up that also doubles as an intriguing piece of history, don’t hesitate to pick this one up.

Cotton Reboot! is out now on both PS4 and Switch.