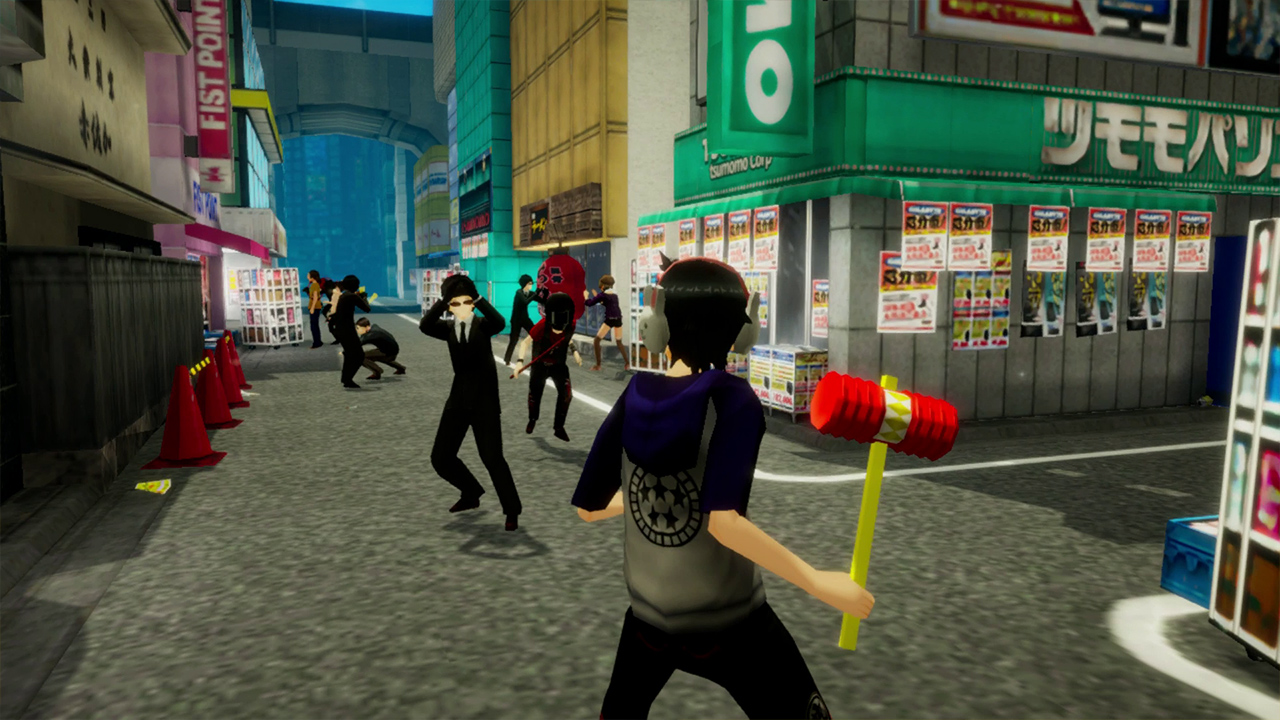 Japanese developer Acquire has a knack for putting out janky action games with a lot of charm and creativity. This was especially the case during the PlayStation 2’s heyday, which saw the release of two games: Way of the Samurai and Shinobido: Way of the Ninja. Both were ahead of their time in many ways but also rather idiosyncratic. They never had a chance at breaking into the mainstream, basically, but they lived on as cult classics with an enthusiastic following.

Fast forward a few years and Acquire were struggling to adapt to the demands of modern HD development on the new consoles. Luckily, the less demanding PSP’s resurgence in Japan provided fertile ground for another attempt to recapture the magic, and Akiba’s Trip was released in 2011. Of course, the game was never picked up for localisation, but the next best thing – a modern remaster – has finally arrived in these parts with Akiba’s Trip: Hellbound and Debriefed.

So, does Akiba’s Trip recapture that Acquire magic? It’s a bit complicated. Without a doubt this is a game that remains intriguingly unconventional in 2021, let alone when it was released a decade ago. The setting unsurprisingly plays a big role in that – few games utilise the Tokyo district of Akihabara for a backdrop. But a new setting alone doesn’t guarantee an interesting game – all too often it’s used as an excuse for reusing the same old ideas.

Thankfully the developers had greater ambitions. Take the game’s combat, which is designed to play in a way that best mimics the action on-screen – namely, stripping the vampire adversaries bare (well, almost…) so they’re exposed to sunlight. Whether you’re bashing button commands to hit foes over the head with a broomstick or hefty dakimakura pillow, or holding a button to lunge forward and pull off some trousers, it feels like you’re performing these actions. The associated lead time in doing so means constant foresight is required, lest you’ll be left open to a pummelling, your own clothes open for the stripping.

It’s not without its issues. Namely, the game isn’t as tightly balanced as it could be. Damage received and dealt is highly dependent on weapon and clothing stats, yet in the latter half of the game, the materials required to enhance any weapon or piece of clothing are easy enough to get hold of that many encounters can be made trivially easy. This has the knock-on effect of dulling those strange combat mechanics since it becomes possible to make it through encounters by repeating the same old strategies and skills rather than learning new ones.

Avoid dabbling too heavily in the equipment upgrades, then, and the game will deliver its fair share of by-the-neck encounters, and it’s the weightiness behind your moves that means the slightest mistake can cost you everything. It’s just a shame that it’s so easy to move away from balanced combat – especially in New Game Plus – leaving combat dull and repetitive.

Perhaps this messiness was a cost for the game playing host to a huge variety of equipment, much of which needs to be stripped from the randomly appearing NPCs, some of which can be bought at various stores. If you want to dress up as a giant bear, for instance, you can – just look for the person donning the giant bear suit (and chef’s hat) outside one of two streets, and on top of that make sure you’ve got the right skill book, in this case the one that retails for a whopping 300,000 yen.

This is the most egregious example but making a game world where hundreds of items are obtainable and upgradeable with enough time and players are bound to make things too easy for themselves eventually.

It’s the polar opposite of the restrained design found in Acquire’s own Way of the Samurai, whose three-day repeating time cycles allowed the designers to put some clear restraints in place, from deft limits on character equipment to obtainable money.

Where the game truly shines is in its overarching narrative, which places significant emphasis on Akihabara’s role as a hub for people to gather and passionately celebrate their hobbies. This is a constant theme throughout the game’s story, particularly in the neutral ‘pacifist’ route, and it’s enhanced by some of the smaller details peppered throughout.

For instance, one story mission has you to listen to moe anime fan Nobu wax lyrical about the game’s fictional mahou shoujo anime series IT Witch Maria for three minutes, including all sorts of details about the production process and its adaptations into different forms of media.

This level of detail turns what seems like a generic reference to that sort of anime into a celebration of the subculture, and moments like this go a long way toward bringing the game’s Akihabara setting to life beyond more superficial elements like including pretty visuals. And let’s be honest, the humble PSP was never going to deliver on the pretty visuals.

This brings us to the elephant in the room. The presentation, which, save for some lighting improvements, has barely been altered from its PSP source material. Simplistic buildings, constantly empty train station platforms and smudges for billboards and vending machines serve as this game’s visual depiction of Akihabara.

By comparison, the sequel, Undead and Undressed, features a significantly more realistic cityscape, filled with licensed stores and even shop music. They even tasked popular illustrator Watanabe Akio with designing the characters. And yet despite all of this extra visual fidelity it’s this uglier game that has more soul to it, its sequel’s focus on generic visual novel style character routes largely failing to capitalise on the game’s setting.

While Akiba’s Trip isn’t as tightly designed as the developer’s best work, nor is it as anywhere as pretty as its sequel, it still brings with it an Akihabara worth visiting. A narrative with surprisingly heartfelt moments brings the Tokyo district to life. Fighting enemies remains addictive even after cracks in the combat system begin to show up, and the atmosphere features a neat subculture vibe that you’d be hard-pressed to find in other games. Acquire did manage to recapture some of that magic after all.

Akiba’s Trip: Hellbound and Debriefed is out 23rd July on PC, PS4 and Switch (tested.)