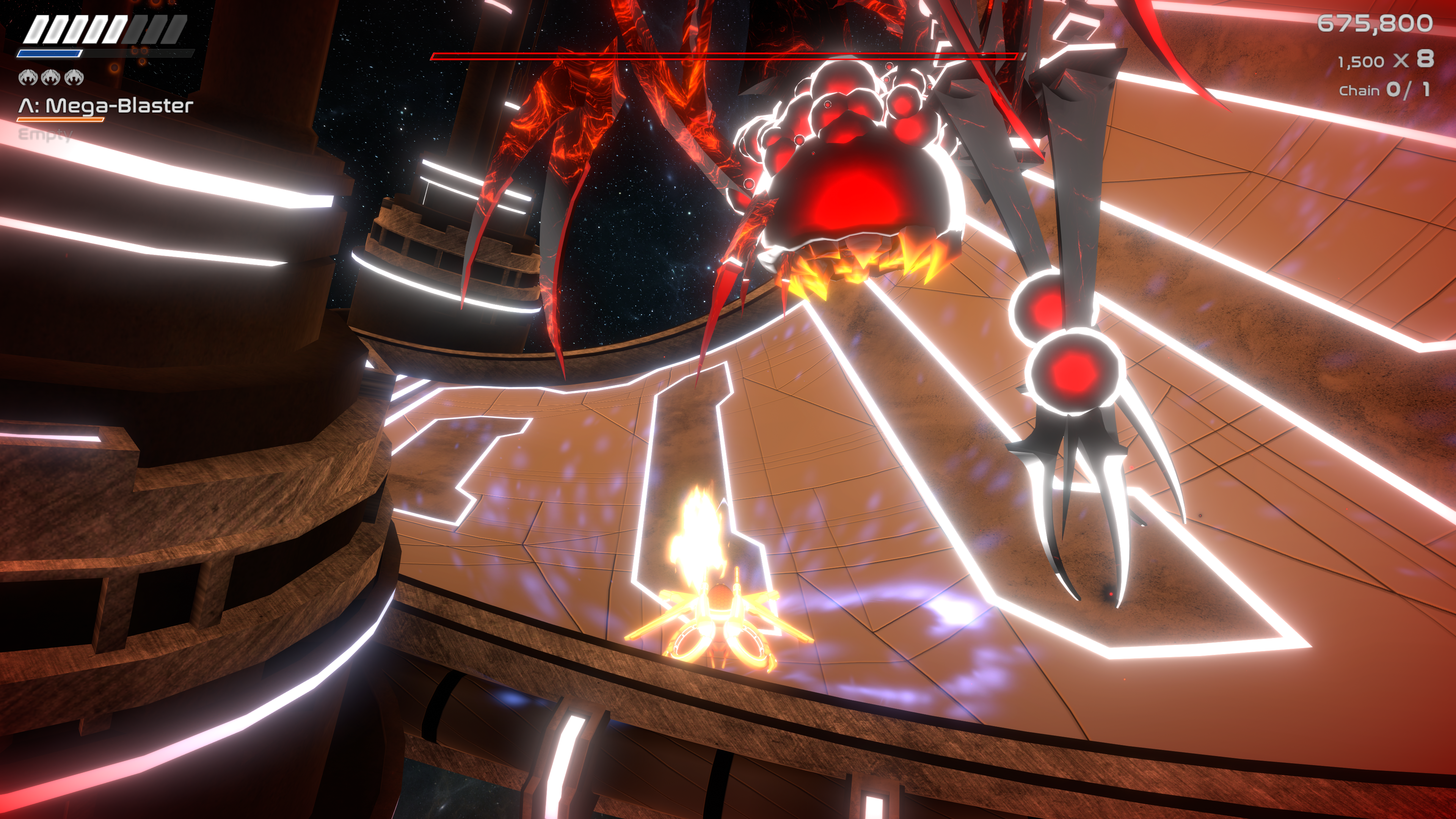 I came to this arcade-style shooter expecting a sense of dread and despair – the artwork, showing hellish crimson backdrops, focuses on the game’s mechanical arachnoid adversaries. All the more surprising to find that the tone is light-hearted, backed by comic-book style presentation.

You play as a baseball cap-wearing dogsbody, tasked with blasting metallic bugs off space stations and asteroid outposts. They enjoy their job a little too much, firing up the cylinders and going in all guns blazing.

The mechanical menaces are drawn to radiant energy – a valuable power source. This ties into the game’s fixation on power and energy. When you aren’t blasting bugs, you’re charging power nodes by chaining enemies together with an electrified leash. The leash is a multipurpose tool, also able to leave larger enemies paralysed. Shocked enemies can then be dashed into, with the dash attack also rebounding incoming fire.

These aren’t your only means of attack – there’s a long list of weapons, some of which are pleasingly comical such as the Weed Whacker. Two weapons can be held at once, with the option to add a third slot as an upgrade. Even during the campaign’s final moments, new weapons make an appearance, with some feeling more experimental than others. You’re bound to find a favourite that you’ll want to keep hold of.

If that wasn’t enough, extra firepower is temporarily granted by syphoning off surplus energy, creating huge electric arcs. Turret installations feature too, which can be manually aimed during swarm invasions.

The campaign lasts around 2 hours and features multiple roots and outcomes. This is because our plucky protagonist has become trapped in a time loop, caught in a conflict with two iterations of their future self. It’s your choice who to side with and believe, making for a story more engaging than anticipated. After the final boss is dealt with, the choice is given to end your run – adding your high score to the leaderboard – or jump straight back into the loop and take alternative paths.

With three possible outcomes, it’ll take around six hours to see everything, and additional challenges can be selected, affecting weapon drop rates etc.

Stage design falls into two camps, incidentally – curvaceous, twisty, space stations and small asteroids which wrap around similarly to Super Mario Galaxy’s planets. Finding key targets is never too tricky, though, as guide arrows highlight objectives. While the number of mission types isn’t bountiful, they do provide something to focus on, while sometimes adding a much-needed sense of urgency.

Aside from the campaign, there are daily run challenges of varying difficulty, endless and survival modes, a jukebox, and the chance to revisit bosses in the arena mode.

Curved Space is a game incredibly eager to please. In fact, its biggest flaw is that it’s too eager – it rarely punishes and is quick to give away the keys to the kingdom. Or the access codes for the nukes, to be more precise. Almost every weapon seems overpowered, making you feel like you always have an advantage, no matter what’s thrown at you. Nothing is locked away; ergo nothing must be earned with hard graft.

At around £15, it still represents decent value for money – there’s a lot to discover, and the production values are notably higher than most arcade-style shooters. A very odd proposition, then – a game that’s visually pleasing and instantly gratifying while suffering from being mechanically bloated and rather mindless. Luckily, these aren’t the most heinous of gaming crimes.

Curved Space is out now on PS5, PS4, Xbox One, Xbox Series X/S and PC. Coming soon to Switch.