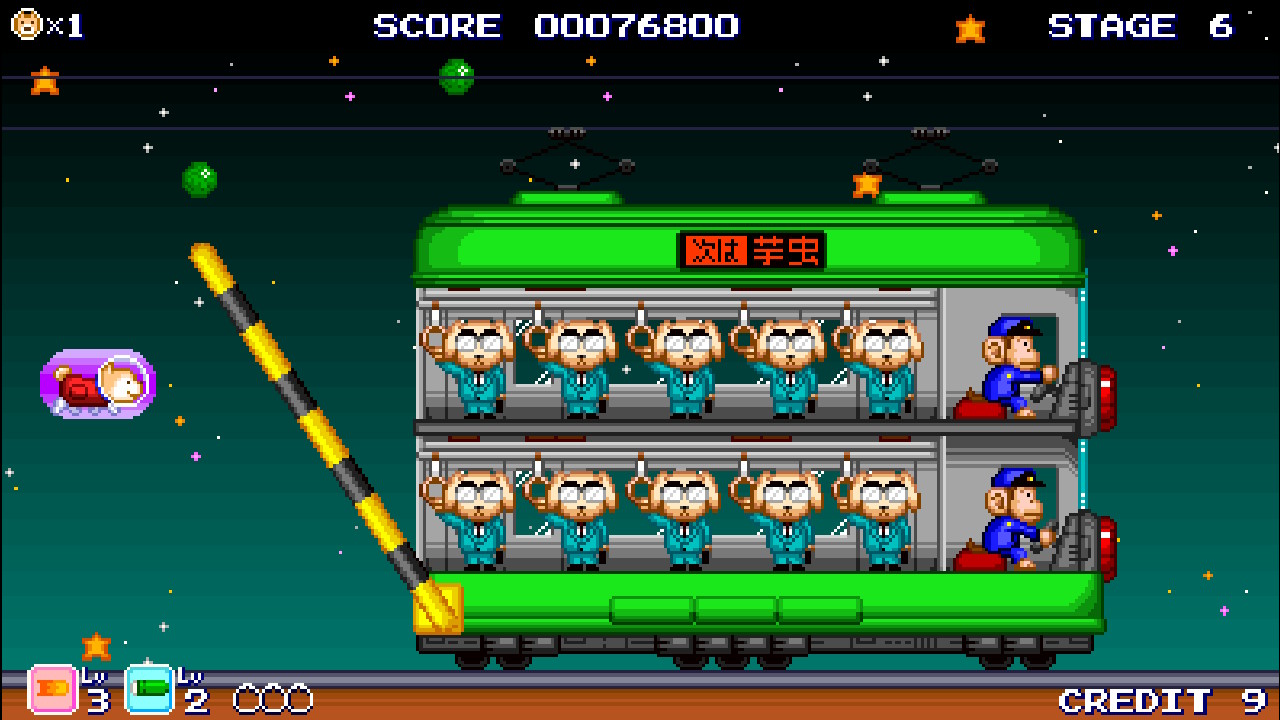 Prior to playing, we had an inkling this horizontal shooter paid homage to Konami’s legendary Parodius. It was the character select screen that gave it away, revealing that the trio of playable canines have their own unique projectile attacks and upgrade paths. Within moments, more similarities come to light, from the bright and vibrant visuals to the nonsensical level themes.

Arsenal is upgraded not by levelling up or gaining XP, but by simply collecting several identical power-ups. This involves shooting them so they spin around and stop on the desired item, much like Parodius’ coloured bells. It’s a brilliant twist as not only must you keep an eye on incoming hazards, but to achieve maximum firepower, juggling power-ups is crucial.

Even grabbing an incorrect power-up – which degrades firepower to a default level – is slightly advantageous, as you may discover there’s a better weapon out there for the task at hand. Between them, the three colourful critters fire projectiles in all different directions and patterns, with some formations more useful than others, especially when it comes to bosses.

Another Parodius hallmark is the presence of ground troops. A variety of cutesy animals, from bears to squirrels, charge along the bottom of the screen, sometimes returning fire. You’re equipped to deal with these too, auto-firing missiles and homing rockets, adding a third element to juggle. A smart bomb and an optional shield power-up round off the weapon roster nicely.

While the levels are short, no two are alike and there are plenty of moments to catch you unaware. Without revealing too much, the Sonic the Hedgehog 2-style casino stage puts a slight twist on things, while another is based around chipping away at a multi-screen battleship, with the screen scrolling along the surface and then the underbelly before a final confrontation.

A boss rush stage features too, filled with comical creatures – from a double-headed caterpillar to a crazed cat that summons armies of fish. Ingeniously, not every boss is beaten simply by manically blasting – some require a degree of experimentation, using objects around you to defeat.

Unlike Konami’s parody take on Gradius, Rangerdog isn’t punishingly difficult and doesn’t fall back on memorising attacking patterns to succeed. That’s to say, it’s far more casual. It’s hard to imagine anybody being confronted with the Game Over screen while playing easy mode, although you may have to dip into the pool of continues when it comes to the later bosses. Normal mode provides a fair challenge; hard mode is there for those who want to get their monies worth – all £4.49 of it.

Rangerdog is a touch too fleeting, requiring not much more than an evening or two to see everything. While it lasts, it’s a lot of fun – a small but perfectly formed package that flows superbly, boasts some smart pixel art (along with faux Mode 7 effects) and is peppered with amusing touches. A shoot’em up symphony of silliness awaits.