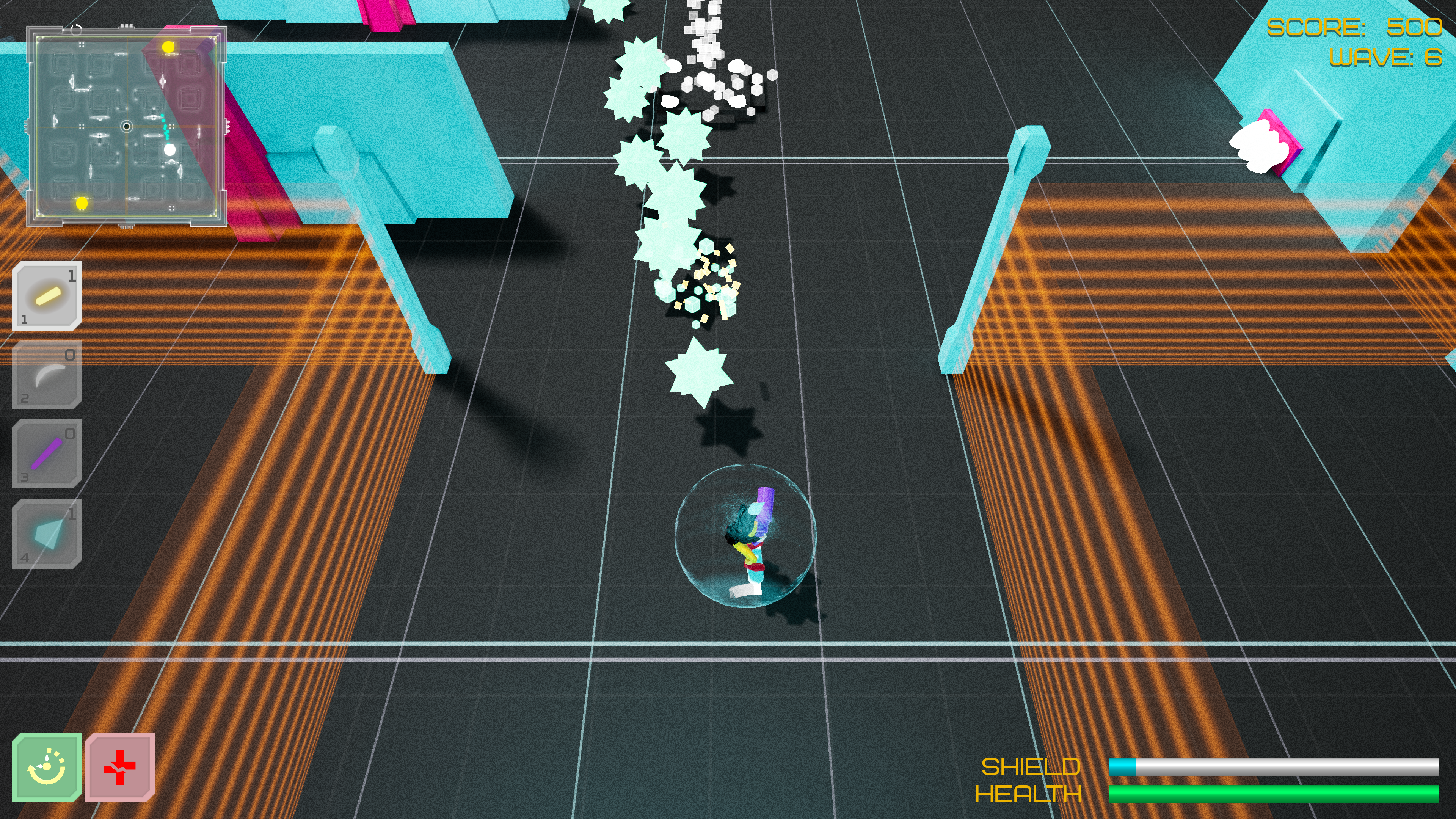 This twin-stick shooter stars a group of spiky-haired rebels on hoverboards. Although this does make a pleasant change from the usual non-descript spacecraft, while also recalling the ‘90s CGI show Reboot, it’s the first of many peculiar design choices. Not only do the hoverboards gain momentum, making changing direction tricky, but they also have a slight turning circle. In a genre heavily reliant on precision movement, a central character that slips and slides is almost unheard of.

The kindest thing I can say about Bitmaster is that it’s notably different to its peers. The idea is to survive twenty waves to summon a random boss, with each wave doling out two power-ups – including weapon upgrades and shield recharges – along with two random perks or negs. These vary from speed boosts and slowdowns, increased and decreased fire rates, and a purposely disorienting screen filter.

Because the perk system is glossed over during the tutorial, it can be hard to figure out what’s going on initially. Throwing another surprise your way, the LB/RB buttons are used to shoot while the triggers (LT/RT) swap weapons.

The weapons themselves are an odd bunch. There’s four in total, varying from a wide boomerang-style curved beam to an explosive shot with a large blast radius. There’s no ‘good all-rounder’ and most have unexpected side effects. The boomerang shot clips through smaller enemies when it should be ideal for mopping up bullets, while the spread shot has such a slow rate of fire that it’s possible to overtake projectiles while zooming around. It’s quite the sight.

Resembling a mouse maze, the levels are large enough to justify the presence of an on-screen map. Bullets and enemies can pass through walls, but only translucent walls are penetrable. If you aren’t able to clear a wave in the allotted time, then you lose a score bonus – something almost unavoidable during the hectic later waves.

When you finally reach a boss – which include a serpent and a shielded fortress – the penny finally drops. This is one of those games where you must grind and level up to become powerful enough to progress. The starting character simply lacks the firepower to make a sizeable dent in their health bar before the screen is overrun with enemies.

If the grind was enjoyable, or perhaps a shorter process, this wouldn’t be a problem. Well, less of a problem. Unfortunately, the bizarre design choices result in a game that feels like a chore to play. Special mention also goes to the sound, which like most of this package, is simply bizarre. Both the music and sound effects sound as if they were recorded off the TV using a microphone. I’m guessing they’re just badly compressed; real ‘recorded off the radio onto a cassette tape’ quality.

Bitmaster would have benefited greatly from being a shorter, more arcade-like, experience with none of the flab or grind. Jump in, chase a few high scores, jump out. As it stands, it has little to no respect for your time, making it hard to recommend to even the most battle-hardened twin-stick shooter fans. An almost entirely joyless experience.

Bitmaster is out 23rd June on Xbox One and Switch. It previously launched on PC.