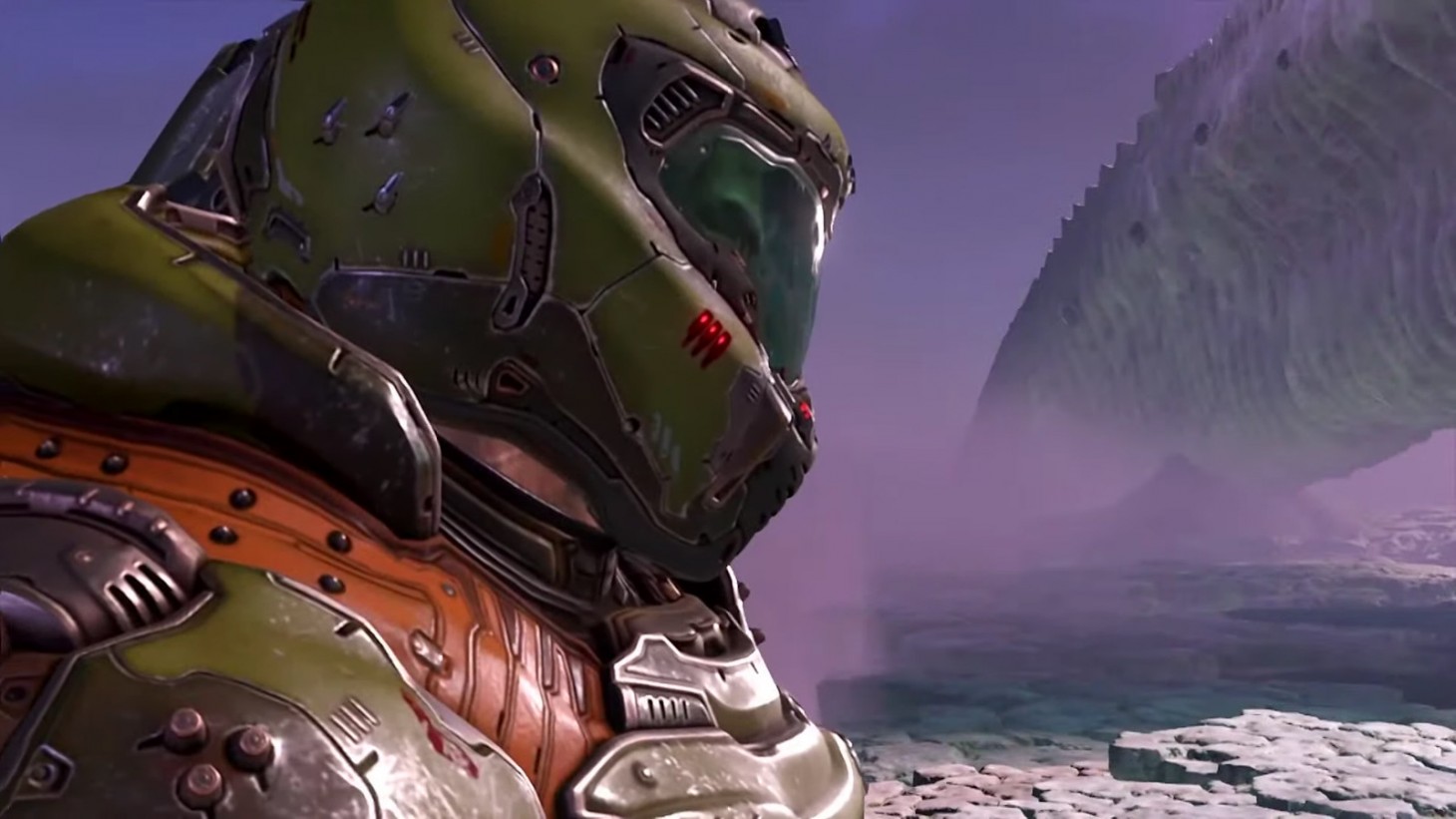 A real hodgepodge of new releases awaits on the Switch eShop this week – everything from anticipated DLC to a vastly belated UK TV show tie-in. A few E3 surprises too.

Those surprises are DOOM Eternal: The Ancient Gods Part One, available now for £17.99, and Rebellion’s supernatural shooter Strange Brigade. Both ‘shadow dropped’ during Nintendo’s E3 Direct, with Strange Brigade currently available for £22.49.

As for that aforementioned UK TV show tie-in, it’s only bloody Bullseye – a teatime favourite from the ‘80s and ‘90s. The darts-based quiz show ran for 16 seasons, and is well ingrained in British culture thanks to its catchphrases and cartoony bull mascot.

This Switch iteration comes from Sabec – the same people who gave us the recent calculator and xylophone apps for Switch – and features 5,000 multiple choice trivia questions and 1-4 player support.

Going back to scheduled content (aka, stuff already planned for this week) there’s the retro shooter Rangerdog – which we dare say looks a little like Parodus – the slick looking futuristic bike racer 32 Secs, comic book tie-in party package The Sisters – Party of the Year, and the Army Men-style tower defence shooter Plastic Rebellion.

Then there’s Minute of Islands, a lonely narrative driven puzzle platformer with striking visuals. This is one of the few new releases to get the review treatment this week. The Xbox Hub dished out a 4.5/5, while Push Square opted for a 7/10. “The lovely presentation pairs nicely with the melancholic story, and you’re left with a short but atmospheric and intriguing adventure,” said Push Square.

A trio of visual novels are out too. Cross the Moon entails vampires and an out of town cop, Bakumatsu Renka SHINSENGUMI is a full price (£44.99) romance novel, while IdolDays is another lusty affair that’ll set you back a mere £4.99.

Check back next week for new release armageddon. It’s looking like a corker.

Erased from history and buried in a nameless tomb for 4,000 years, Seteki the Witch Queen has risen once again.

Only one troop of heroes can stand against Seteki and her army of mummified monstrosities: the Strange Brigade!

The fight’s not over! Your victory over the hordes of Hell spared Earth from a perilous, demon-infested fate, but saving humanity has upset the delicate balance of power in the heavens. Become the DOOM Slayer once again and set things right in DOOM Eternal’s first single-player expansion, The Ancient Gods, Part One. Travel to previously uncharted realms of the DOOM universe and confront a new challenge head-on.

It’s time for you to step into the Racoon City police station as Dead by Daylight’s meets with Resident Evil. This new Chapter includes a Killer, Nemesis. Take control of Umbrella’s bloodthirsty bio-organic weapon and hunt your targets without mercy. But Nemesis isn’t the only addition to the character roster: 2 new Survivors are joining The Entity’s Realm with Leon S. Kennedy and Jill Valentine. Unflinching in his mission to expose Umbrella, Leon has proven himself a true survivor since his first day with the RPD. Jill is a brilliant S.T.A.R.S. agent, one of the only surviving members of her unit, and a hard target for even the most unrelenting adversary.

Become an aquatic animal and join these frenetic fights in the depths of the Ocean.

Complete the missions and defeat each boss in this arcade retro game.

Something once great lies dormant beneath the cold streets of Armorica’s isolated capital, L’Amour.

When it sleeps it dreams, and when it dreams it hunts. Fates converge as a young man’s mysterious death brings sibling vampires Aurore and Lux Amanite into a world of occult obsession and corporate corruption.

Meanwhile, police inspector Ryouko Otsuki arrives in L’Amour to find a city whose identity is just as severed and broken as her own…

In this restaurant, the dead will have the last supper. Hamburgers, omelets, sushi, pudding, anything. Let us cook your favorite dish when you were alive.

This is a story about “Bear” and “Cat”. You are “Cat”, the assistant of “Bear”, who is running this restaurant. Players can know about their favorite things by “diving” into the memories of the customers. … but in fact, you do not remember who you are. Not even your favorite dishes.

There is no difficult puzzle, no exciting battle, no epic cut scenes. But, you will remember them.

Enjoy the new episode “epilogue” – exclusive to Nintendo Switch™, where you will know what happened after the main story. Enjoy the new songs, new graphics, and new dishes!

Trained at the U.S. Army Camp, you have been a part of US Army forces for a long time now. Get ready to fight the war on crime in the immersive situation against a group of terrorists trying to suppress the nation with their evil plans.

Choose one of the 4 available soldiers and use wisely you riffle.

Collect grenades and power-ups to succeed in this never-ending game that guarantees long hours of fun.

Your country needs you!

You are Chubbit, a plump bunny plunged into a precision platforming nightmare! To escape, simply move left, move right, and master the nuanced dynamics of ceaseless bouncing!

Playing well means playing fast, exemplified by the simple stopwatch HUD. Earn gold medals through speed and strategy to open map shortcuts and bonus levels as you journey across vibrant worlds toward the light of home!

Play as Haruto Soraki, a high schooler in his quest to find the memory he presumably lost in an accident seven years ago. As you begin your journey in your hometown, meet with forgotten friends, uncover the town dark secrets, leap in the past to out-think the people trying to stop you and try to piece back together what really happened 7 years ago.

“Rangerdog” is a cute retro-style side-scrolling shoot ’em up. Choose one of the three ranger dogs and defeat the boss waiting at the end of 7 different stages.

Put your dart throwing skills and trivia knowledge to the test to win points and ultimately the game.

Bullseye™ is party gaming at it’s very best in an easy, out of the box, pick-up-and-play game that keeps everyone at the edge of their seat.

Bullseye™ is a great way to while away the time, giving a brilliant game show experience at home with family and friends of all ages.

Jam packed with 5,000 multiple choice trivia questions in ten genre categories, no game will be the same.

The classic otome game Bakumatsu Renka SHINSENGUMI is now more beautiful and easier to play than ever!

This is a romance game for women where you become the first female soldier in the Shinsengumi, fight alongside the other soldiers, and fall in love. Experience historical battles alongside the likes of Kondo, Hijikata, and Okita.

A love-adventure game where you can enjoy the heart-pounding roommate life of a rookie producer and a delinquent girl turned idol.

This basically means that in this game you can ONLY interact with the same colored platform as yours and that you will fail MANY times trying to beat the next level.

Traverse the world while avoiding hazards and deadly falls, Timing jumps with the utmost precision is a must!

32Secs takes you on a real futuristic high-speed experience. Rush and take your best chance to overcome your racing opponents but be careful and don’t crash your bike into cars or any obstacles on the asphalt!

Puzzle Box 3 in 1 is a small puzzle collection of the top trending puzzle games.

It all begins when Wendy decides to throw an end-of-year party at home with her friends. Before she gets a chance to ask her parents, her unbearable little sister Maureen steals her idea and asks their parents first. Unfortunately, the parents will allow only one party!

Maureen and Wendy start a series of crazy challenges to decide which one of them will host the party. With sister against sister, there is going to be trouble!

Immerse yourself in the fun and delirious universe of two sisters, who are never short of mischievous ideas!

When the parents are out, the whole house becomes a playground. But when a malfunction infects your 3D printer and starts mischief, it’s up to you to defend the place you call home and turn your playground into a battlefield! Armed only with your cherished toys, you must face an ever-growing army of plastic and stop the malfunction before it takes over the world (or at least your bedroom, kitchen and basement)!

Experience a unique twist on the tower defence genre – work out the best strategy and place your defensive troops in levels full of interactive elements, then support them with a set of specialized weapons. Face off against enemies both on the ground and in the air through a series of ever more intense waves, culminating in a standoff with a giant boss.

Color the World together!

Discover a new world, but do not do it alone – take a friend, play together! Travel together through increasingly demanding levels of difficulty in many interesting biomes. Color the world decolourised by the evil Mona Chrome! You will be accompanied by some popular and distinct heroes who can, but certainly do not, remind you of familiar characters. Our heroes are monophobes, so they must act together to get her!

Find yourself back in 1998 in Poznań, Poland. You are a time traveler, Johnny, who wants to move into the present time, but who knows… how? Play and find out. Solve interesting puzzles, enjoy relaxing music, and have a great time like in old times.

BLOCKY PUZZLE is a challenging puzzle game where you need to fit all the shapes in the grid to complete the level. Put the shapes to the right place on the game board without empty spaces and every shape in place.

Explore strange and wonderful islands and dark labyrinths below in this narrative puzzle platformer. Guide young mechanic Mo on her quest to repair a world on the brink of collapse. The powerful Omni Switch at your disposal may not be enough to fix the damage that hides beneath the surface…

Race through traffic in a futuristic city’s highway with your cyber motorcycle, completing various trials and challenges!

Take the city at extreme velocity! Hop your motorcycle and complete various races, time trials and other challenges in a sci-fi metropolis with high-speed! Hit the asphalt hard, zig-zag between bikes and racing cars on vibrant neon lit streets.

Hack, boost and maneuver with different futuristic bikes on endless highways! Tune up your vehicle with system updates and hardware upgrades – be the fastest racer in this rapid rush! Improve your racing skills and reflexes, dodge enemy bikes, beat the other racers and try to become the master of the asphalt!

Get higher speed and exact handling, use boosts and hacking tactically to leave your foes behind. Compete for the best trial time with other real riders. Discover the glowing, futuristic streets, find every boost, beat every boss and collect as many coins as you can to upgrade your vehicle reaching extreme high speed! Unlock new vehicles, customize your bikes, make them faster, harder, stronger!