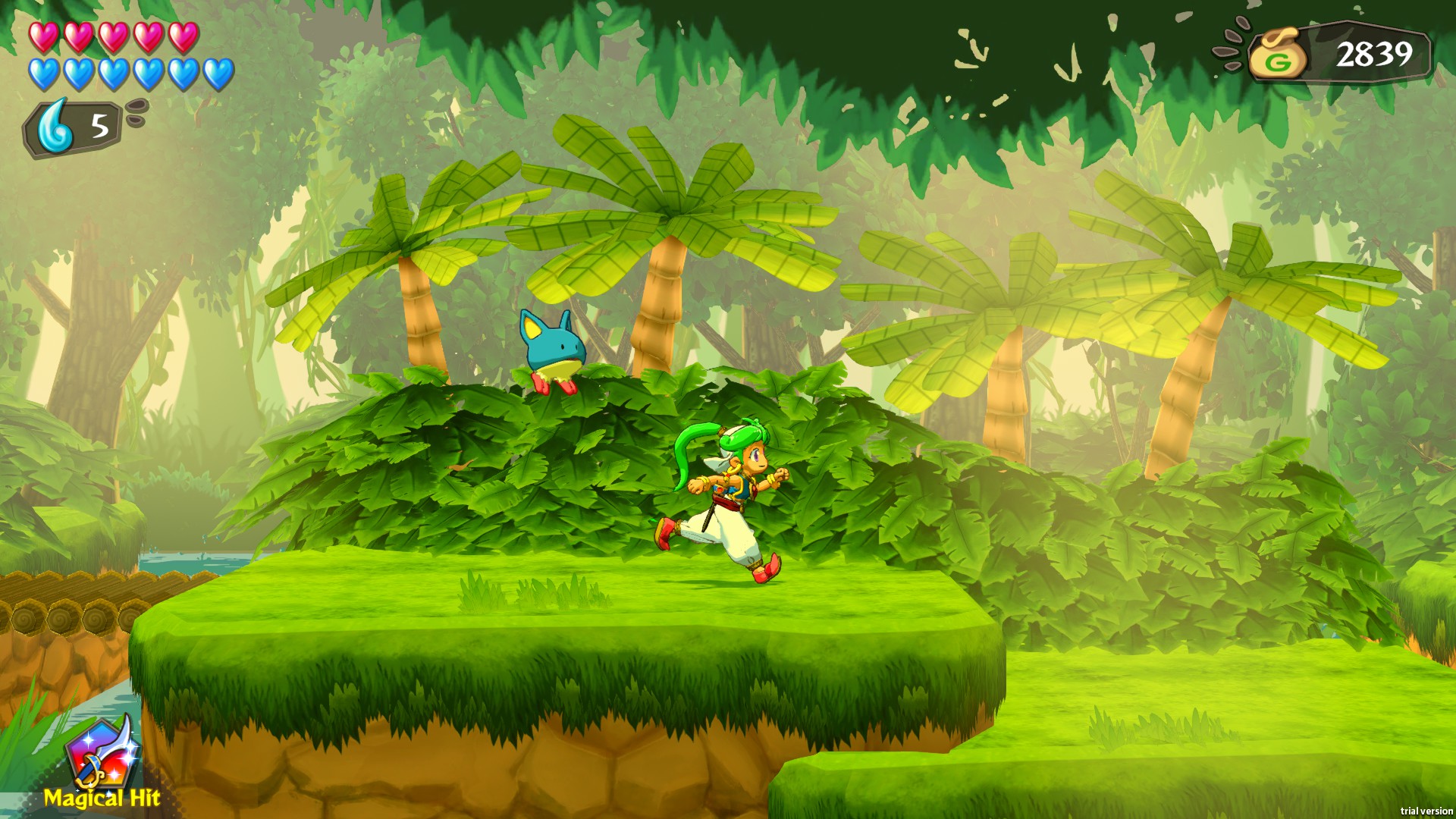 I have an odd relationship with retro games. I owned a NES and played a lot of classics at the time they were released. Yet, I’ve barely touched the NES and SNES apps on the Switch. I’ve occasionally booted up games like Super Metroid, only to drop them pretty quickly. I think it’s because I’ve changed. I no longer see something like having to etch a map in my brain as a fun activity, but rather an exhausting one. I don’t enjoy becoming stuck anymore. I’m old.

Wonder Boy Asha in Monster World is quite interesting, then. It’s a remake of a Japan-only first-party Mega Drive game from 1994, now improved with the trappings of modern tech. It has new-fangled 3D cel-shaded graphics, voice acting, and a save system (hurrah!) but it also sticks to the original’s overall design.

The updated graphics here are quite nice. Not as beautiful as the hand-drawn sprites from the 2017 Dragon’s Trap remake, but still charming and clean. The animation when Asha opens a treasure chest is lovely. The same can’t be said for the limited animation loops for some enemies, and while the camera panning justifies the use of 3D, it can still feel a little unnecessary. You generally only see 3D camera movement to transition between different areas in a level.

It’s unusual for me to talk about graphics first, but I’m doing so because the developer has made a decision to make the gameplay stick rigidly to the original release. In fact, when I got stuck, I used a guide from the Mega Drive original to help. You, as Asha, need to save the kingdom by freeing five spirits. Yes, it’s a very ‘90s platformer. You can slash your sword, block with your shield, and use a little creature called Pepelogoo to help you access areas and solve puzzles.

For my first couple of hours, I thought this was an excellent idea. A fresh coat of paint over an original seemed like a great way to revisit a game from the past. But as I started to make headway, the more frustrated by the authentic gameplay elements of the original I became.

Let’s take that Pepelogoo. It’s a fun addition. This blue fellow is invulnerable to lava, so you can use them as a platform over difficult terrain, and you can hold onto it to perform a double-jump. The problem is that Pepelogoo needs to be called first, so any double-jump becomes a process of calling the blessed thing, waiting for it to get to you, and then trying the double jump. In a genre all about flow and precision, it’s a grating halt to the action. A series of double jumps in a row – something that feels great in most platformers – becomes a chore here.

Health pick-ups are also sometimes difficult to come by, and boss fights can be frustrating. This was fine at a time when games wanted to stretch out their length (it’ll take you about five hours to complete Asha, incidentally), but I’m not that into repeating sections several times in a row just because I missed a jump by a millimetre. This often makes Asha feel more frustrating than difficult. Your mileage may vary – if you’re someone who thinks modern games are for wimps or wants to have as authentic a time as possible, you’ll love this.

Wonder Boy Asha in Monster World is by no means a bad game. It has some interesting ideas, and the light RPG elements are pleasing. Some concessions towards modernity, such as a rewind feature, would have gone a long way, however. As it stands, this is one for retro enthusiasts and platform purists.

Wonder Boy Asha in Monster World, from ININ Games, is out now on PS4, Switch and PC.