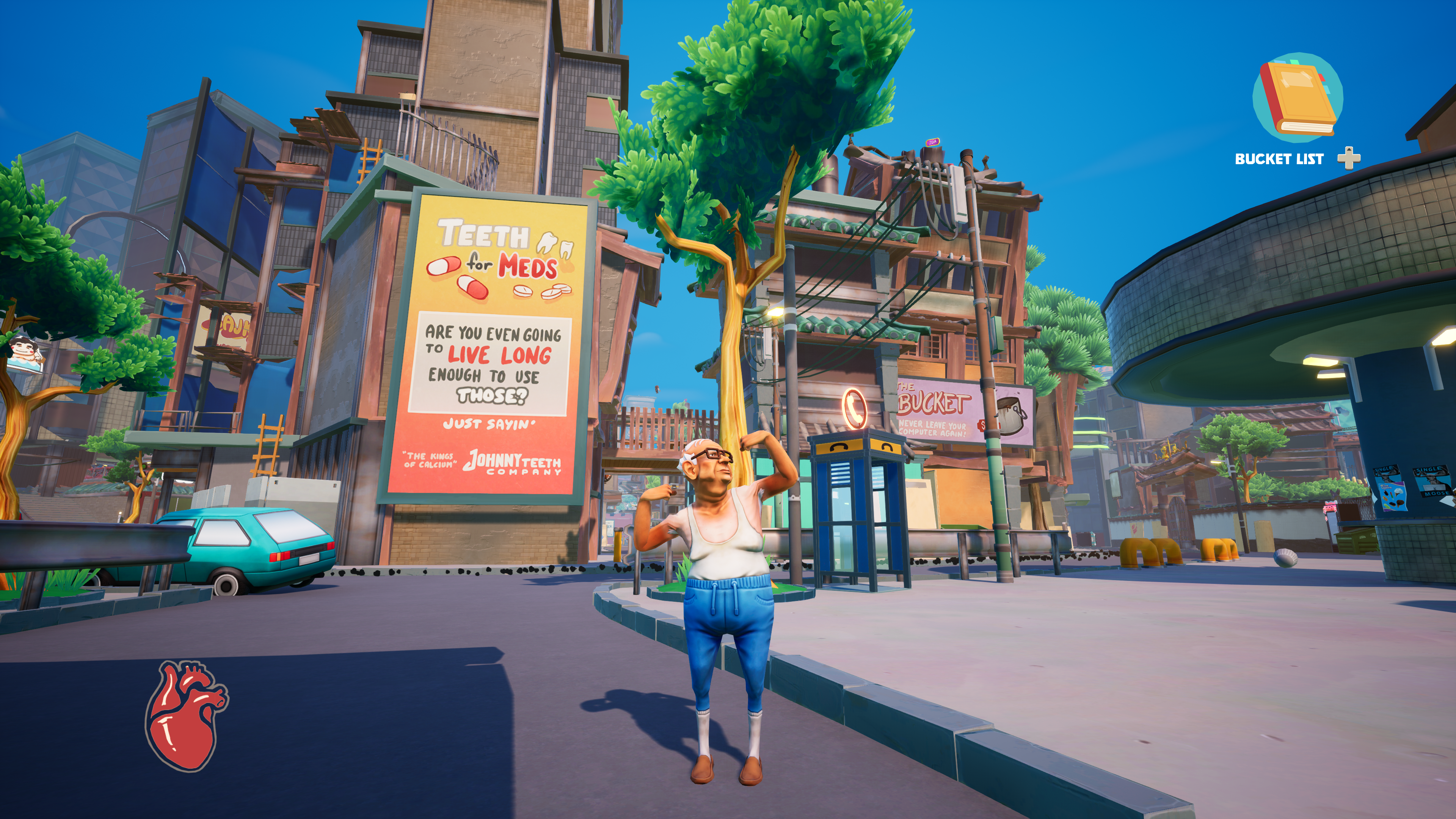 Within ten minutes of starting this sandbox mayhem simulator, our hapless elderly lead had been subjected to all kinds of pain and torment, from drinking too much and urinating on a sparking plug socket to being decapitated by piranhas – all in the name of ruining a fellow old fogies’ birthday. If this sounds like your idea of a good time, remind us to never invite you to a party. On the brighter side, you’re probably going to get a kick out of Just Die Already.

It follows in the footsteps of Goat Simulator, Octodad, and Totally Reliable Delivery Service to offer an open-ended experience full of unscripted mayhem, driven by purposely wonky ragdoll animation and a physics engine that’s both unrealistic and unpredictable. One major difference to the aforementioned is that Just Die Already is also surprisingly gory, with the four elderly protagonists able to lose limbs and carry on regardless, gushing arteries, broken bones and all. As such, and despite the otherwise colourful visuals, you may not want to play this one around children.

While there isn’t much in the way of storyline, there is a jokey premise of Zoomers versus Boomers. The younger generation has deemed the elderly a blight and a burden, and so after being kicked out of their retirement home, the boomers decide to fight back and go out with a bang – quite literally.

Rather than involving GTA-style turf wars, JDA simply presents a bucket list of quests to complete at free will, with more added to the list every time a new district is discovered. The term ‘bucket list’ is misappropriated somewhat – while there are a few quests that fit the bill (including free-falling from a certain distance and banging a shrine’s gong) the vast majority are typical video game pursuits, such as killing NPCs using certain weapons, dying in different ways, and consuming items.

Most quests can be completed effortlessly, simply by exploring and messing around. The rest call for preparation and experimentation. A good example is a cryptic quest to derail the city’s tram, requiring more thought than simply throwing a few objects in its path. As you start to notch up playtime, chances are the bucket list will be full of less obvious quests. By this point, the city’s vending machines will be well-stocked with items to aid your cause, purchasable using the JDA tokens doled out as rewards. Tokens can also be found hidden away within the city’s shops, parks, rooftops and backstreets.

The city is genuinely fun to explore, designed with a surprising amount of consistency. Visually, it reminds us of Sunset Overdrive, of all things – blue skies, bright colours, and an abundance of neon billboards. Interactive items are common, as are distractions such as impromptu basketball, football and fishing mini-games. Vehicles are present too, being purposely tricky to control.

Incidentally, the triggers and bumper buttons are mapped to the protagonist’s left and right hands, allowing for two items to be carried and used at once. The weapon assortment is as silly as you’d expect, including bee grenades, fire/electric wands, banana skins guns, black hole launchers, and, erm, a floppy salami sausage. It’s also possible to attach balloons to people, sending them slowly drifting.

Death comes quickly and frequently, but it’s never too inconvenient and it’s usually down to your own doing. This is largely because there’s a peculiar absence of enemies. A few areas have security guards that’ll throw you out, and that’s about it – there’s no GTA style wanted level, or even the potential to summon an army of angry NPCs. I’d say the biggest threat here – aside from landmines – is the traffic. The driver AI is, once again, purposely shoddy – cars slam into corners, often causing pile-ups.

Thankfully, there’s still less ‘jank’ here than Goat Simulator and its contemporaries. The ragdoll animation is par for the course – vastly unrealistic, to the point where it’s laughable. I never had to respawn due to becoming trapped or lodged somewhere though, which is unexpected in a game of this ilk. The worst glitches I had to contend with was some odd NPC behaviour and the physics engine randomly throwing stuff around, such as stacks of boxes breaking apart the moment you enter a room.

By now it should be clear that this is a very silly game. Ultimately, how much enjoyment you’re going to get from it depends on what kind of experience you’re looking for. If you’re expecting a branching storyline, character development, boss battles and something resembling a difficulty curve then you’re going to find it severely lacking.

It’s up to you to create your own path and spur yourself on, knuckling down to focus on completing the ever-growing bucket list, or simply spend your time messing around and exploring. If you’re looking for something open-ended to jump in and out of, rife with slapstick and occasionally crass humour, then this will fit that bill. Either way, there’s a peculiar lack of both a looming threat and consequence for your actions.

The fact that elderly people can get away with things that other people can’t certainly rings true here, making for an experience that’s unquestionably fun, but also one that doesn’t always demand your full attention.

Just Die Already is developed by DoubleMoose Games and published by Curve Digital. It’s out now on PS4, Xbox One, Switch and PC.