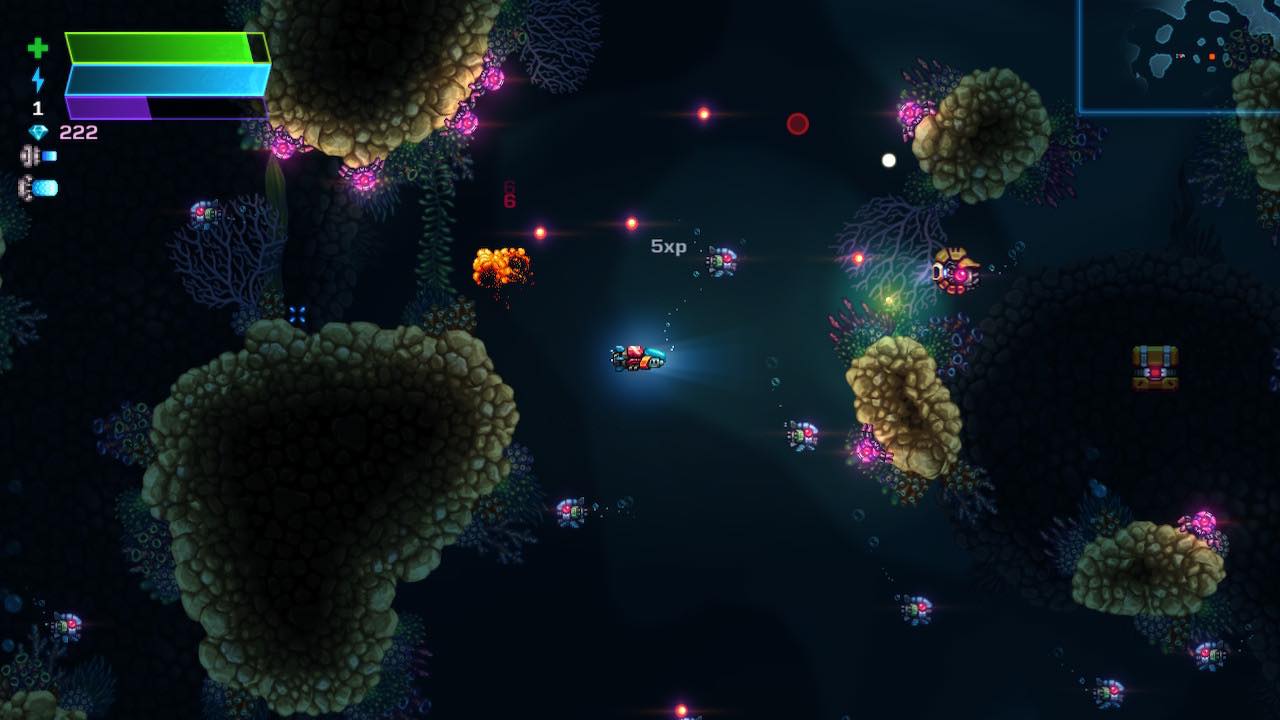 This explorative shooter is a sequel to Aqua Kitty (UDX) – a game where a team of milk mining cats overcome their seafaring fears to tap into a huge natural reserve of deliciously creamy milk that has been discovered under the sea.

If you didn’t play any of the previous iterations of Aqua Kitty, Astro Aqua Kitty is simple enough to pick up and play with no previous experience with the series. You pick two characters out of eight at the start of the game, a pilot and an engineer with different stat setups built for all kinds of play styles.

Combat is simple, kept to two buttons for a main weapon and a sub-weapon which both rely on your ships energy supply. On death, the enemies sometimes drop gems or upgrades for your ship, which you’re only able to use when you’re at a save point.

People who played Aqua Kitty will find Astro Aqua Kitty to be much larger in scale, with extended maps and branched paths with more open areas for combat. Fish aren’t friends nor food – they’re foes, robotic ones at that, equipped with a variety of bullet-hellish abilities that shoot on sight.

On paper, Astro Aqua Kitty is a perfectly reasonable RPG with a specific set of rules to prevent it from being too easy such as not being able to upgrade your ship and weapon upgrades on the fly. But in practice is a different kettle of fish. After the first level, once the game has opened up the rules become almost too tight of a restriction, and the more open areas and wider maps make exploration a bit tedious.

With gradually diminishing returns on experience points gained as you blast the underwater blighters and level up, the need to explore other areas for the XP boost becomes a necessity, at your peril. There is no real ability to grind for levels, enemies respawn gradually if at all, so much of your success comes from being properly equipped to face down the threats you’ll face.

Each level is staged around completing an overarching objective, though there may be some smaller ones around if you explore enough. Unfortunately, they tend to be performing the same tasks multiple times, which becomes slightly tedious and a bit annoying when some of these tasks already include multiple steps.

Even though some stages can be long-winded, the set-up of the levels allows for a poke and progression style of play. The generously placed save points often hover on the borders of foe filled areas, allowing you to swoop in, pick a few off and retreat to heal up safe in the knowledge that they won’t be coming after you again any time soon.

Veteran players will likely be delighted with this new sequel and all it has to offer, however, the unfamiliar may find Astro Aqua Kitty a few koi short of a pond. It’s not inherently bad, there are redeeming factors that increase its overall playability but they feel superficial in terms of what it brings to the game itself.

The music is good fun, with a different track for each stage, and the environments are alive and bustling with colour; but I feel the game is let down by not going all-in for a sequel. I’m not sure if the devs were holding back or just hadn’t thought about it, but I didn’t feel like a juggernaut under the sea when my upgrades made no visual improvement to the ship or attacks to show off my increasing and unstoppable power. Minor details like that would have pushed my opinion from “Only Ok” to “Pretty Good!”

There are plenty of games that do ‘Shoot Em Up’ better, but Astro Aqua Kitty would likely be a decent entry for people looking to get into the genre. Its vibrant underwater world and cute yet rugged animal characters are suitable for younger players and those with Furrie fantasies; a baby bullet hell with exploration.