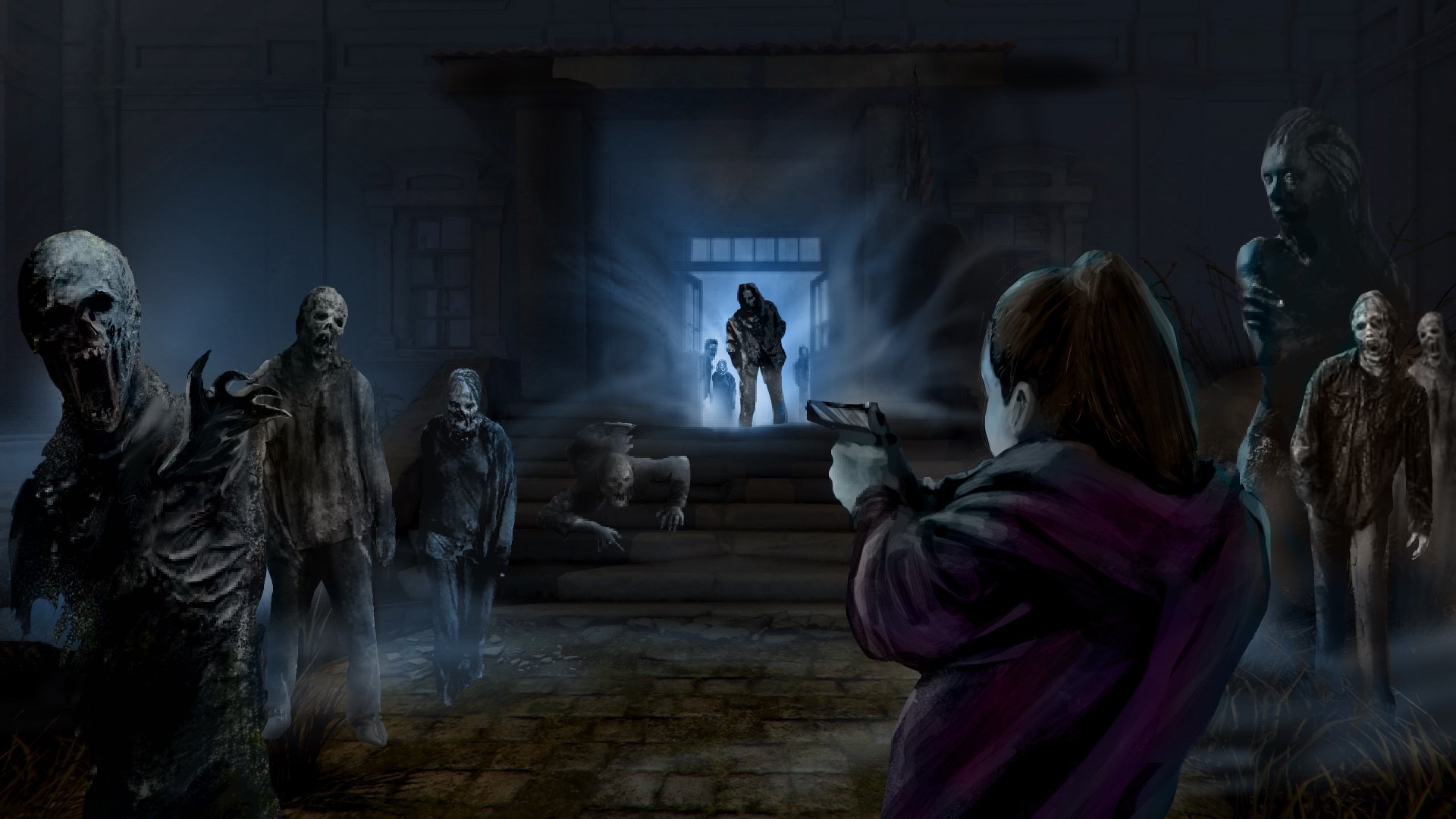 If you peruse the digital storefronts often, you’ve likely caught wind of the Outbreak franchise. This ‘old skool’ horror series, paying tribute to Resident Evil, has gained several spin-offs and sequels over the past 2-3 years. Judging by screenshots alone, each instalment reuses assets and runs on a retooled engine, simply adding co-op and other new features. Given that developer Drop Dead Studios is a one-man team, such repurposing is excusable.

Outbreak: Endless Nightmares is the latest in the series, being a continuation of The Nightmare Chronicles, while putting a roguelike/randomised twist on the proceedings.

The multi-floored Arzt Memorial Hospital acts as a hub, and in lieu of a tutorial, ghostly apparitions speaking in menacing and mysterious tones provide vague pointers. Even with their “help” it still takes around an hour or so to get into the swing of things, ergo into the developer’s mindset, dying a few times before everything finally clicks.

The idea is to explore the hub, manage your inventory/loadout via a lockbox, and both discover and enter anomalies – randomised “dungeons” comprising of several small locations filled with zombies, traps, and the occasional statue-shoving puzzle.

It’s your call what to take into battle – you may want to play conservatively and save more powerful weapons for later stages, or simply go all guns blazing and hope you’ll find more ammo along the way.

Health pick-ups (green herbs, known here as ‘sprouts’) can also be found within dungeons and placed into the universal lockbox for future runs. While essential for survival, these aren’t the most valuable of items – the focus is on finding Conductor Coins (as in, train conductor) which not only unlock new areas of the hospital hub, allowing access to new anomalies, but also serve as your ticket home via the train randomly situated within the hospital’s grounds.

Each anomaly contains just a scant handful of coins, so it pays to search everywhere and to deposit them at the nearest lockbox should something nasty happen. This also frees up inventory space – in keeping with the series’ roots, only eight items can be carried at once.

Despite levels being randomised, patterns within anomalies still emerge over time. You’ll start to learn level exit locations, puzzle solutions and even item/trap placement. A good example here is that a hallway may feature tripwires on one run, and spiked floors on the next – the hazards change, but you still have an idea of what’s coming.

Clearing an anomaly while on death’s door can be satisfying, and there’s also pleasure in the way the zombies explode into a shower of blood and guts, even it does look comically unrealistic.

There are a few different modes (including one with permadeath) and because the developer has thought to include ten save slots, it’s possible to try each without losing progress. There’s an assortment of characters too, although oddly, all in-game dialogue refers to series star Lydia.

Even after mastering the basics, becoming accustomed to the crude and text-heavy UI in the process, Endless Nightmares still its main hurdle to overcome. One of its main features is the choice of perspectives – fixed camera (in the style of the original Resident Evil trilogy, with the additional option of modern or tank controls), first-person or third-person. No perspective works perfectly though, so you’re forced to toggle between all three (via a push of R3) to get a better look at the surroundings and deal with what’s ahead.

This makes for a very sloppy and inconsistent experience. Despite the presence of tripwires, it’s impossible to look down when in first-person, while the fixed camera often hides enemies off-screen or is too closely zoomed in. Third-person gives the best viewpoint, but even then, motion feels clunky and unnatural as if it has been haphazardly patched in – it’s clear the engine was originally intended for a fixed camera.

As such, Endless Nightmares is a game at odds with itself, buckling under its ambitions and constricted by an engine intended for something far simpler. It wants to offer something new and modern – a roguelike randomised take on survival horror with scalable difficulty, self-discovery and customisable loadouts – but it still has all the trappings of a ‘90s horror game, from the purposely clunky controls, unrefined UI, ropey animation to the overly generous auto-aim.

To see it through to the end will take a degree of commitment, and likely some messy instances of trial and error too.

It’s fascinating to see what a solo developer is capable of producing in this day and age – like the recent In Rays of the Light, some effects (lighting, shadows, etc) are reasonably accomplished – but much like its zombie adversaries, Endless Nightmares is trying to put its best foot forward while the other is dragging behind.