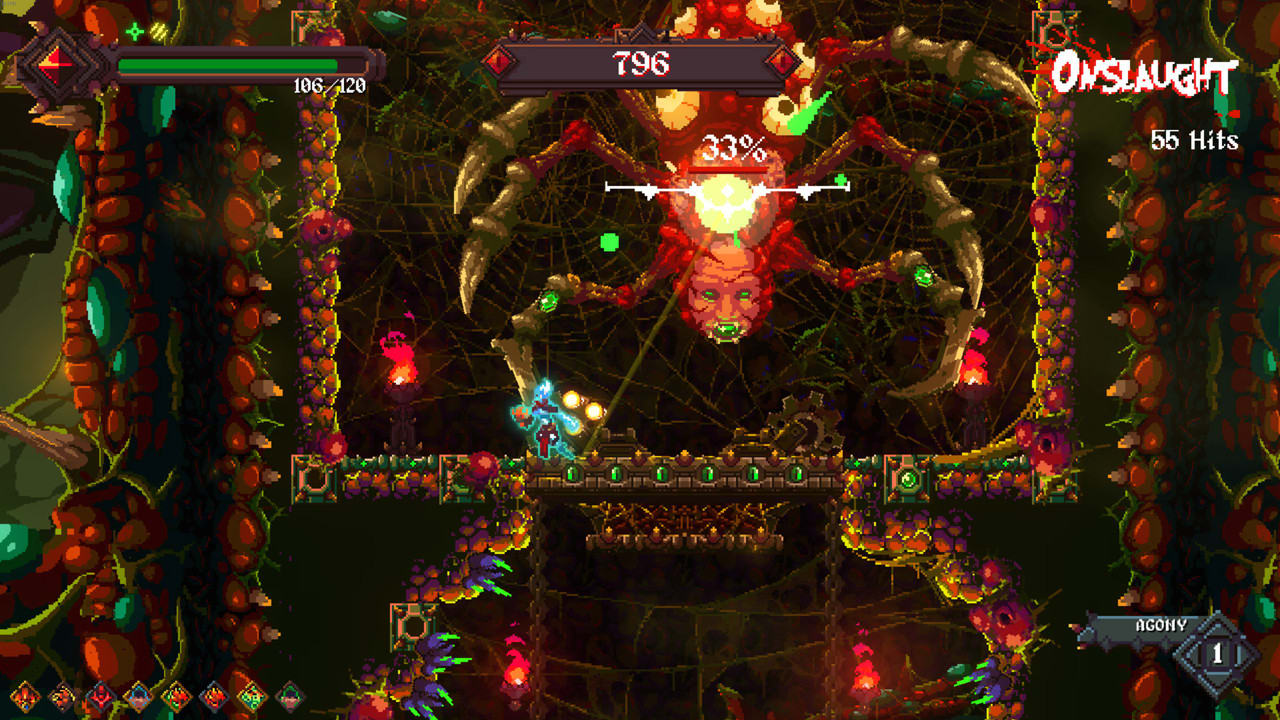 Despite being mathematically made of 1s and 0s, quite often the difference between a game that works and one that doesn’t is the way it feels. That difficult to articulate gut sensation. Rising Hell feels great. The combat is satisfying, fun and addictive, but explaining why isn’t easy.

First, let us back up. Rising Hell is a roguelike vertical action platform game. That’s a lot to unpack. Basically, you run, jump and punch through vertical levels and then you die. And repeat. And die. And repeat. Each time, getting a little stronger and getting a little further until, eventually, you’re strong enough to reach the end. It’s a format that plays to the strength of bullet-hell shooters, but instead of getting better by memorising enemy patterns, each effort doles out stat upgrades.

It sounds repetitive, and roguelikes can sometimes feel like a grind, but Rising Hell has a lot of variety. There are boss fights, auto-scrolling levels with rising lava, and platforming challenges with spinning saws alongside your typical gauntlet of bad guys.

There are other ways it spices things up. Each time you destroy an enemy you collect souls. These are one of a few different currencies, and there are regular opportunities to spend them on upgrading your character. You might want extra health, extra attack power or a resurrection. Each of these choices gives you a new way to play, so you can switch it up and try different combinations, greatly increasing the tactical aspect.

These upgrades aren’t permanent, however. When you die, you’re cast back to where you started, unless you spent your blight. Blight can be used to unlock new characters and modify the weapons taken into battle. Modifications are interesting and the new characters play differently. One uses a gun-like ranged attack, rather than the default punching glove. This completely changes the way the game functions. Easy levels become hard. Hard levels become easy.

Now we’ve talked about how the game works, let’s get back to the feel. Because it’s so good. Rising Hell takes Doom-like heavy metal aesthetic and follows through on it brilliantly. The pixel art is grungy and disgusting, with beautiful variety between stages, and the music made me want to headbang. The gameplay follows this up. You’re constantly smashing stuff, and the animation and screen shake really sell the idea that you are on a path of destruction.

Hitting an enemy feels great, and the fact your double jump move is also an attack feeds into the sense of forward momentum. Very metal indeed.

If it’s not obvious by now, I really liked Rising Hell. There’s so much polish and content here. I haven’t even talked about the additional challenge mode and the wealth of special weapons you unlock as you play a stage, the power and carnage potential of which made me smile after every new acquisition. There’s even an easy mode for those who just want to smash stuff without hassle.

It isn’t perfect – levelling up took a while and sometimes it felt like I wasn’t making a huge amount of progress. Replaying the early stages also vexed, while the dash implementation (mapped to the L button) feels entirely unnecessary and unintuitive.

Rising Hell does, however, know what it wants to be and fully commits to it – a rollicking good time, where you smash into a bunch of enemies and cause utter carnage. It’s the game equivalent of playing air guitar. And it just feels so damn good.

Toge Productions’ Rising Hell is out this week on consoles. It originally launched on PC in 2019.