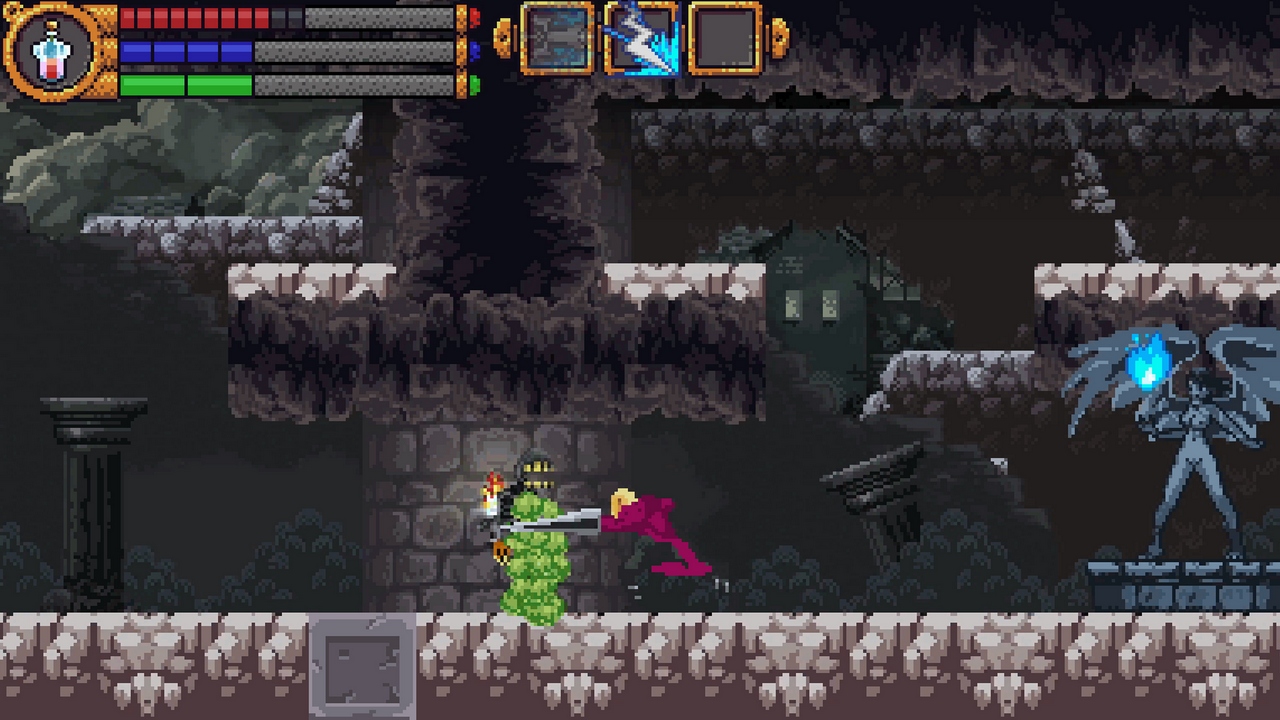 Remember Castlevania and Metroid? Indie developers certainly do. From Hollow Knight to Dead Cells, you can’t move for modern takes. The Skylia Prophecy is another in the burgeoning genre of Metroidvanias, however, it skews a lot closer to the ‘vania side, taking both gameplay and visual cues.

It starts with a slow-moving opening crawl that explains the plot. I still haven’t read beyond the first two sentences. How much of this can you be bothered to read?

It doesn’t really matter. You play as a girl called Mirenia – you slay monsters, upgrade your health and mana meters, defeat bosses and gain new spells to overcome evil.

Skylia’s ‘big thing’ is that it is hard. Relentlessly so. While playing through it for this review I saw the ‘Game Over’ screen numerous times. Some players are going to love this. I wasn’t one of them. Whilst difficulty can be fun, Skylia’s just feels … annoying. Combat doesn’t feel refined enough to make overcoming the challenge enjoyable, and checkpoint placement can often mean you must repeat the same segment several times.

Mirenia has two main attacks. You can either stab with your sword/glove hybrid or use your shield. Oddly, the shield is composed of energy that will kill certain foes upon contact – usually those lurking close to the ground. It’s tough to use these weapons together effectively, though, as often enemies walk straight through the shield instead of being repelled by it.

Another issue is that Mirenia isn’t exactly a joy to control. I never felt like I had a fun array of moves to experiment and play with, so I always felt like I didn’t have enough abilities to cope with what was thrown at me. A good example is that Mirenia cannot attack downwards or while crouching.

It’s possible to visit towns and stock up on supplies to help you. However, you can only hold one of each supply, which is stingy to the extreme. We hoped we could mitigate the harsh difficulty by purchasing lots of health potions, but no. So much for creating your own difficulty salve.

Levelling up is also…mysterious. It just randomly happens. I tried to crack the code of what’s going on and it seems like killing certain foes levels you up. It would be nice if the game presented any information concerning this, but with the objective being to kill everything, I’m not sure what difference it would make to how you play.

I don’t want to be too down on The Skylia Prophecy. TIt looks fine, sporting nice animation and the 2D pixel art evokes Castlevania well. There are some neat boss fights, and those that like their games tough may get a massive kick out of it, but there’s simply not enough here to stand out.

Enemy designs are generic, but above that, The Skylia Prophecy lacks its own personality. It’s like a cover of a song that tries desperately to mimic the original as much as possible. If only it had switched up the rhythm a bit.

The Skylia Prophecy is out now on PS4, Xbox One, Switch and PC.