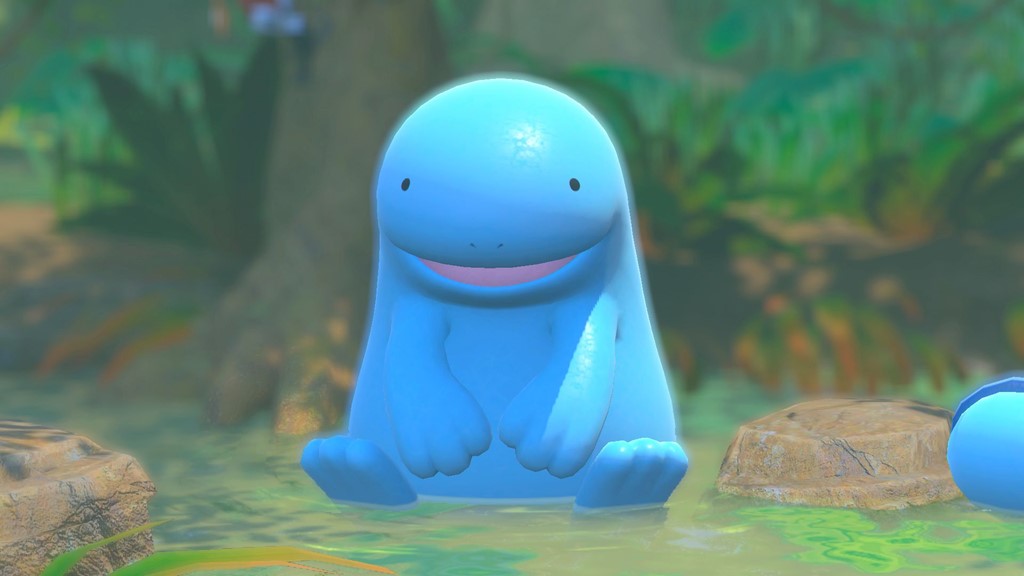 Bandai-Namco are rather chummy with Nintendo these days, trusted with some of the platformer holders most precious IPs. Long time coming sequel New Pokémon Snap is their latest partnership, and reviews suggest it has been worth the 20-year wait.

Scores include top marks from The Telegraph and EGM, an 8.5 from Game Informer, and 8s from both The Metro and Nintendo Life. “It’s been a long time coming but the magic of Pokémon Snap has been effectively recreated in a game that’s more challenging and engrossing than its peaceable premise suggests,” said The Metro, who also praised the cleverly hidden secrets and a deceptive amount of content.

Speaking of long-time coming sequels, this week also sees the release of R-Type Final 2 – the original is almost as old as the original Pokemon Snap, hitting PS2 in 2003. The jury is still out this crowdfunded shooter sequel. Thankfully, there’s a demo.

Chances are you can make your own mind up about Castaway Paradise. It’s a brazen clone of Animal Crossing, right down to being the only human on an island full of animals. The only difference appears to be the chunkier visual style. It may suffice as a cheaper alternative, but obviously, it’s largely uninspired. The PC original is also quite old now, first launching in 2015.

Fly Together! is one of the few other new releases to get the review treatment. VideoChums enjoyed this colourful single-screen couch party game, in which planes are guided to airports, resulting in a positive 4/5.

It appears there is a seemingly random untranslated Japanese game on the UK eShop too – 世界の中心で、AIは戦う (AI Fights in The Heart of the Wood, according to Google.) Whether it has slipped through the net or due an English translation soon is hard to say. Most bizarre.

For the first time in nearly two decades, you can experience R-Type Final 2! Feel the rush of mowing down hordes of Bydo with your fleet of R-Type fighters equipped with an arsenal of new and classic wave cannons, force units, bit devices, and devastating delta weapons. The Bydo threat is always evolving, as new enemies spawn from the wreckage of fallen foes, and stages are corrupted and altered by the sentient Bydo corruption. R-Type Final 2 unites the explosive action of the original games with modernized visuals and gameplay features, making this a must-have title for new and old shoot-’em-up fans alike.

Inspired by the classic Nintendo 64 game, embark on a safari through the scorching deserts and dense jungles of the Lental region, taking photos of wild Pokémon thriving in nature.

Following the sudden death of a mafia family’s matriarch, her sons Gerald and Xander are put on the defensive as former partners threaten to take over their collective business ventures for themselves. See through the eyes of the Gallo children as they witness murders, kidnappings and other crimes wrought upon their households by their own fathers.

Crime Opera explores both the strength and frailty of familial bonds, presenting its narrative in beautifully illustrated style. Customize your experience by deciding to read straight through it like a kinetic novel or make choices that impact the story like a visual novel. Either way, this complex and effectual tale is bound to grip you from beginning to end as a life of crime spirals out of control.

Taiwan Monster Fruit is an exciting, parkour-style, motion-sensing game. Experience challenges and adventures by working together, but still competing with one another, in single-player or four-player team modes. Players will be equipped with different types of cards and work together to become the best team of little monster warriors.

Ever dreamed of smashing your own car? Or maybe a car of your neighbour? Well… now you have a chance!

Grab your weapon, call out your battle drones and start clicking the car into oblivion! Earn cash, upgrade your equipment and find more vehicles to destroy!

Tons of upgrades, support weapons, special abilities and explosions! Taste the destruction at it’s best in this clicker game.

We put much effort into graphical detail and design to bring you a high quality product. Alley in the night, construction site or gas station are some of the beautiful stages we have cooked up for you.

Try to destroy different types of cars – from a Van through american Truck to a massive Bulldozer. Break the window, smash the hood, blow the tires and in the end blast them with a rocket launcher.

THUNDER CROSS II” is a shooting game released by KONAMI in 1991.
Control Blue Thunder 2 and Red Thunder 2 and battle for the survival of the galaxy. Upgrade your shots and increase your options to defeat the bosses. Two player co op is also available.

Experience the world of an alternative future of the Earth and get caught up in a plot of a full-on space saga. It would seem that there is nothing to discover in the Solar System. But in the most remote corners of the Universe mankind has come up against cruel resistance. You are the only one who can save the galaxy from an alien race of invaders!

Choose Railgun, Blaster or Lasers and go up against hordes of alien foes. Float like a butterfly and pity like a bee in true 3D combat. Get the cash and pump up your ships and complete all of the campaign levels.

REKNUM Fantasy of Dreams is an action, exploration and 2D platformer videogame, it is the latest installment in the

REKNUM saga in which Cheri awakens from a fantasy to start

your skills, fight fearsome bosses inspired by classic gameplay, decipher the poetic words of the ancestors when you travel through the dreamworld and reach the real final outcome.

Explore the present to uncover the past, in a short story of love and loss and a life well-lived.

A narrative exploration that examines a world where memories are constantly fading and jumbled. A game about dementia and what happens when you can’t hold onto the things you’ve done or the people you’ve loved.

Slinki is a hard-as-nails 2.5D action-platformer where your own prosthetic arm is the ultimate multipurpose weapon: Use it as a bladed boomerang to control the population of mutated critters, pull levers towards you to get through puzzles and zip-line across grappling surfaces. Furthermore, instead of having your weapon return to you, why not return to it instead with the power of Slinki’s slingshot? All this to find out what happened to the once peaceful forest you used to live in.

The sequel to the award winning Conduct TOGETHER! takes players to the skies in a race against time to bring passengers safely to their destination by drawing flight paths and avoiding collisions in increasingly challenging action-puzzles.

Fly Solo or hand a Joy-Con to your friends and co-pilot through an expansive campaign. Complete contracts, upgrade your airport and collect a growing fleet of airplanes.

Fly against your friends in hectic up-to-8-player battles: throw meteors, invoke tornadoes or drop a giant cake on your opponents. The pilot who gets the most passengers safely to their destination wins.

The player programs the robot and repels oncoming monsters.

For programming, just place blocks without using a general programming language so that elementary school students can play.

However, by considering the weapons and logic to equip according to the type, number and position of the monsters who came,

Crack your knuckles and take a deep breath because the ultimate twitch runner has arrived. It’s called Super Glitch Dash for a reason, people: because it’s really, really super.

Immerse yourself in jaw-dropping next-generation visuals that pulsate to the beat of the rhythm-driven gameplay. Feel the rush of your reflexes as you swipe your way past axes, hammers, lasers, meat grinders and spikes while trying to navigate the insane obstacle courses that comprise each stage. Grind rails, flip upside down, and scream into all-new indoor environments as the rollercoaster-like worlds unfold before your very eyes.

We promise: surviving has never been so much fun. So if you’re looking for a really challenging impossible runner, then Super Glitch Dash is the game for you!

Some time has passed since Yuuji Kazami and his friends fought for their lives in a fierce battle, and a new generation of heroines gather at Mihama Academy, which has been reinstated as a ‘specialist training school’.

Taking place in the same world as The Fruit of Grisaia, new characters bring an exciting fresh take in this brand new series!

This thrilling story, which unfolds at the reborn Mihama Academy, will undoubtedly excite not only those who have played previous releases, but those who are new to the series as well!

A collection of volumes 1 through 5!

Experience the first half of GRISAIA PHANTOM TRIGGER through this new bundle, featuring volumes 1 through 5! Witness how each heroine overcomes their gruesome past, and how they surpass all obstacles to seize the present together with their comrades.

The text can be set to Japanese, English or Simplified Chinese (audio is Japanese only). This includes in-game text, options, and the digital manual. Language settings can be changed at any time.

Play using only the touch screen! Play with one hand!

Legend of Keepers is the perfect mix between Dungeon Management and Roguelite. You have been hired as a dungeon master by the Dungeons Company. Your job is simple: protect their dungeons!

Instant vacation on your own tropical island! Decorate the island, dress up, collect insects, grow crops and help your new neighbors. On Castaway Paradise you can do whatever you want. ♥ Fun activities ♥ Grow plants ♥ Create your own outfit ♥ Decorate your island ♥ Help the villager out ♥ Enjoy the seasons and various events What would you like to do today in Castaway Paradise?

Tactics meets intense gameplay in a one-of-a-kind game you’re sure to enjoy.

Face off against IA like you’ve never seen before. Enjoy a wide variety of competitions and an extensive database with the best teams and players in the world.

Play with or against your friends in leagues, cups and friendlies. Even a local 2 vs 2 match!

Pass, dribble, shoot, head, volley… Do whatever it takes to outscore your opponent by the final whistle.

BORIS THE ROCKET is a simulator of a moustached Cold War Soviet missile operator. You will have a chance to defend your vast Motherland single-handedly. You will have to withstand freezing weather and nasty bear intrigues while slurping condensed milk to survive and adapt to the rapidly changing environment.

Full immersion in the dramatic atmosphere of the Cold War. These are the times when duty to your country is more important than your own opinion. Even your mortal body belongs to the State. Only under such conditions can people truly become real heroes and patriots of their homeland.

Do not let Mother Russia be ruined! Do or die! Death itself is not a good enough excuse for a Soviet man!

After the discovery of a mysterious portal, you are selected as one of the few humans to travel to the world of dragons.

While you serve as an ambassador, you learn more about this strangely familiar place, and discover that your human colleague knows more than he’s letting on…

It will be up to you and the friends you make to uncover the conspiracy that threatens the newly discovered world. In the process, you may even find love.