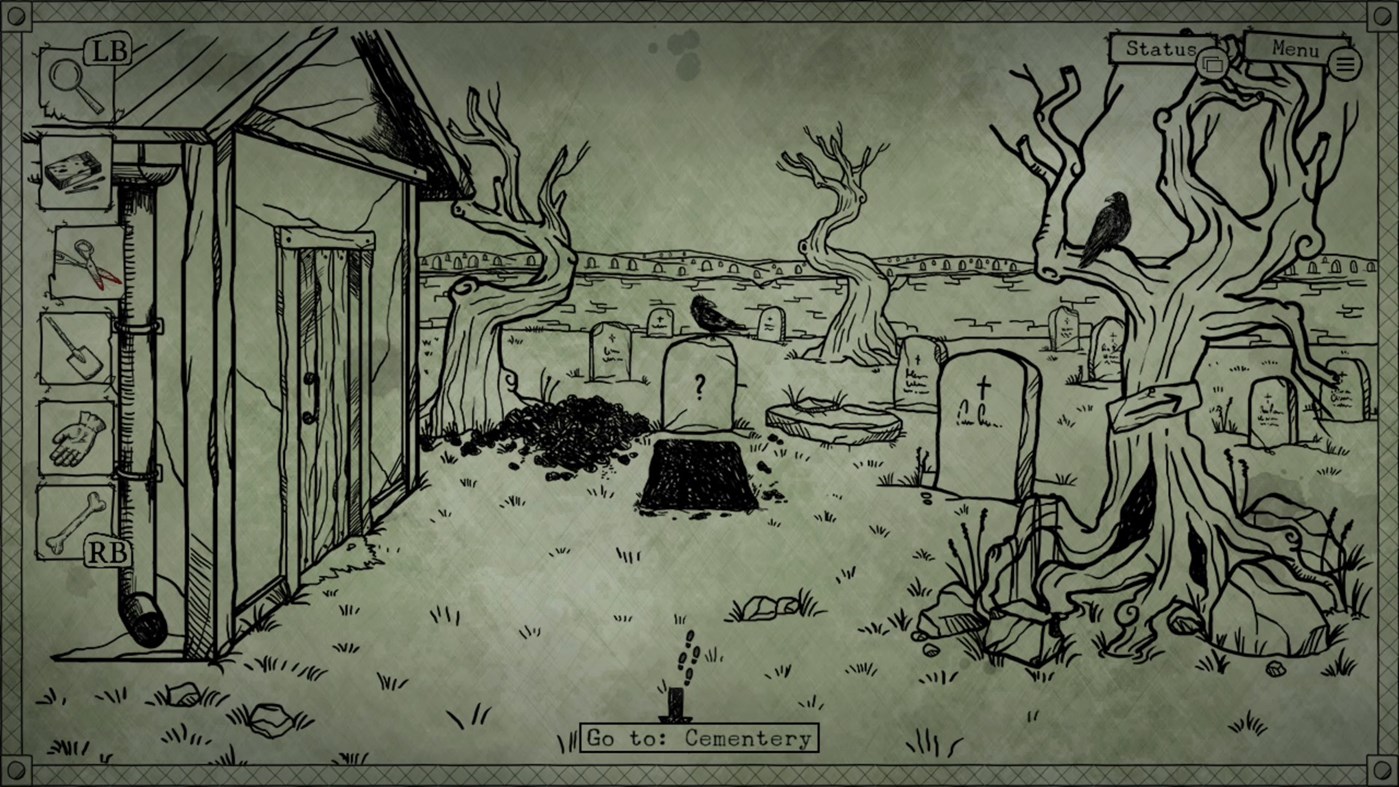 Console horror games were seldom seen before the great indie uprising, and even then, only usually released around Halloween. Things are vastly different these days with horror adventures launching on almost a weekly basis, especially on the Switch eShop.

This isn’t a new release, but rather one that’s making a belated Xbox One appearance. The controls (or “controlls” as they’re known – whoops) are mapped to the joypad in an intuitive manner – the LB and RB buttons cycle through the inventory, which is always on screen, while the cursor automatically adjusts when hovering over something that can be interacted with. Even so, it can be tricky to spot some interactive items as they’re easily lost within the monochrome sketchbook style backdrops.

Like the name suggests, Bad Dream takes place in a nightmarish world. This has given the developers leeway when it comes to implementing puzzles, allowing for solutions that defy logic. Repairing a punctured car tire with bubble gum and snail slime, for instance. On the other hand, it also allows for some imaginative (and warped) brainteasers, such as entering a mirror to access a reversed room and curing a computer virus with medicine. Later stages even toy with the game’s mechanics, making the sketchbook design more than a gimmick.

Hints are few and far between, reduced to the occasional audio prompt or a vague pointer from an NPC. Complicating things further, there’s no objective list or even a reminder of your current goal – it’s a simple case of exploring, grabbing items, and working out what’s required to proceed or to commence an event.

Locked doors are frequent, and often NPCs will request help. A running theme is that everybody inhabiting this surreal, dilapidated, world is in pain or anguish. This links to the disappearance of a nurse – one of the few ‘good’ characters, and a plot focal point – and the reuse of a hospital setting. In a surprise twist, it isn’t abandoned; merely twisted beyond compare – the doctor has been reduced to a decapitated head, and the lunchroom is infested with spiders.

The eight chapters each last around an hour, and it’s highly likely you’ll become stumped at least once before backtracking and eventually discovering something you’ve missed. A missing ladder rung managed to elude us for a good thirty minutes, and this was despite most chapters only being set across a dozen screens. The game’s surreal nature means that some things aren’t quite what they seem.

It pays to search everywhere and make a mental note of what was within each location before moving on. That said, thoughtlessly grabbing items can have unforeseen consequences – although impossible to die, you can still become hurt, spraying the screen with blood and gaining a status effect.

As mentioned, your actions can affect the ending too. If you’re aiming for a certain ending (good, neutral or bad) the projected outcome can be viewed on the menu screen, which is helpful.

Bad Dream: Coma is a memorable experience, just not always for the right reasons. It’s the work of a twisted mind; the polar opposite of an Artifex Mundi game. It mixes gross out humour (think ‘80s Garbage Pail Kids trading cards) and a sprinkling of horror tropes with puzzles requiring a unique mindset. From talking teddy bears to the Grim Reaper himself, anything goes and it more or less works, weaving a twisted tale – one that will likely leave you reeling before rejoicing.