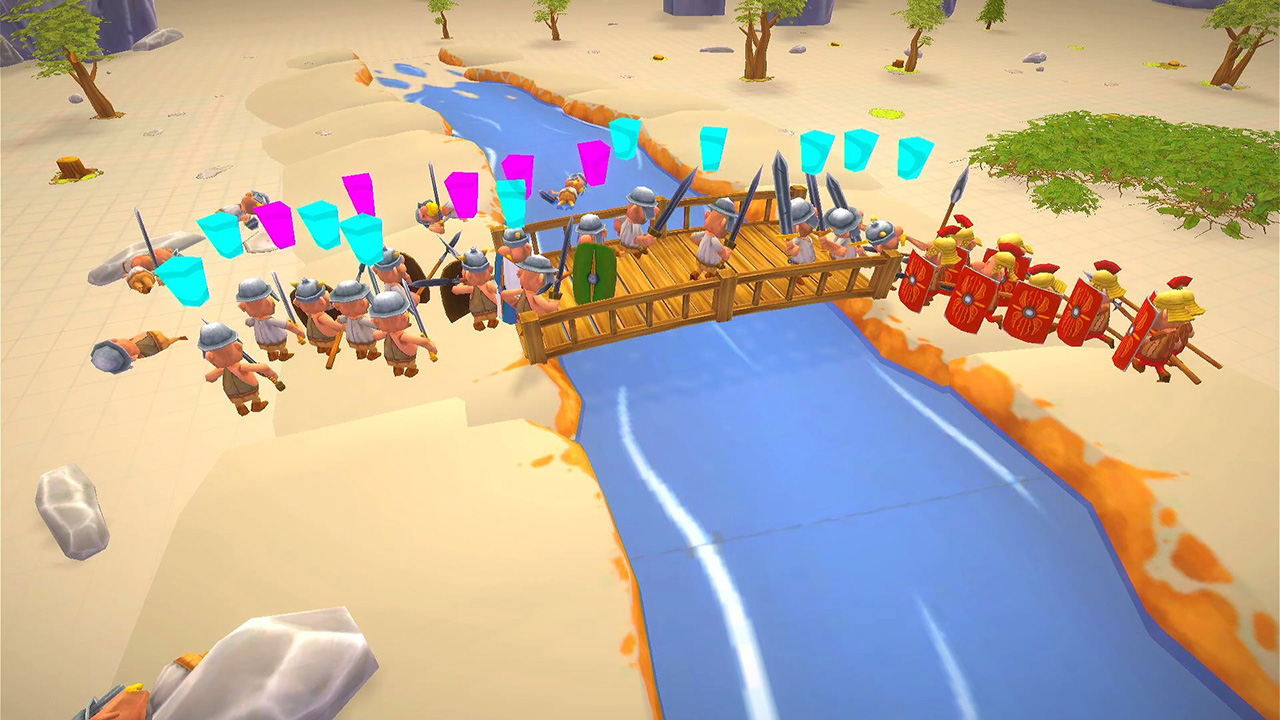 When I was younger, I desperately wanted an Adidas tracksuit. Don’t judge me – it was the ‘90s. I remember asking for ages one Christmas. Sure enough, on Christmas day there was a present. I unwrapped it. A brand spanking new tracksuit. With two stripes.

Gallic Wars feels a little off-brand in a few different ways. The cartoon artwork and light-hearted look at the Roman Empire, Gallic Wars evokes Asterix. Unfortunately for Gallic Wars, the comparison is not flattering. Asterix is witty and funny and punky. Gallic Wars tries to go for a similar look, but without any of the wit or charm. It feels like it’s using the aesthetic of Asterix but with none of the soul. It’s just a facade.

It also feels a bit like Civilisation. You see, your aim is to overthrow the Roman Empire by building up an army over a series of turn-based battles. If you win the battle, you get more troops to take to your next battle. Casualties are permanent, though, so the key to success is to lose fewer people than you gain. There are optional battles to participate in, too. But every battle comes with the risk of losing more and more.

The battles themselves are disappointing. It feels very clunky. You battle over three phases, deploying your troops, planning your attack, then eventually attacking. Switching between these is troublesome. I simply never felt like I understood why these different phases existed and why they required different modes to use. It also really limits your tactics. Set up your troops and watch them go. You can’t make adjustments on the fly or respond to the battle. This really is a battle simulator, not a battle participator.

Clunky is a word I would use to describe the whole experience. This was originally a PC game, and it shows. Everything feels designed for a cursor and a player sitting 12 inches away. When I played this in docked mode, the graphics were tiny, making it difficult to figure out what was going on. The UI is massive, but it’s easy to lose your troops in the background foliage. A more zoomed-in view would have been benficial.

The clumsiness feels even odder when you start to realise how little depth there is to most of what’s going on. There’s only a handful of unit types and once you hit a winning strategy, the game doesn’t really do anything to make you reconsider or change your plans. Just flank everything and you’ll succeed.

Another gripe is that some events feel too random. You assign your units to attack an enemy sector, but because you can’t see where the enemy actually is, you’re left hoping for the best.

I wanted to like Gallic Wars, but there’s simply not enough here, and what is here isn’t communicated very well. In the end, Gallic Wars will just fill you with ennui.