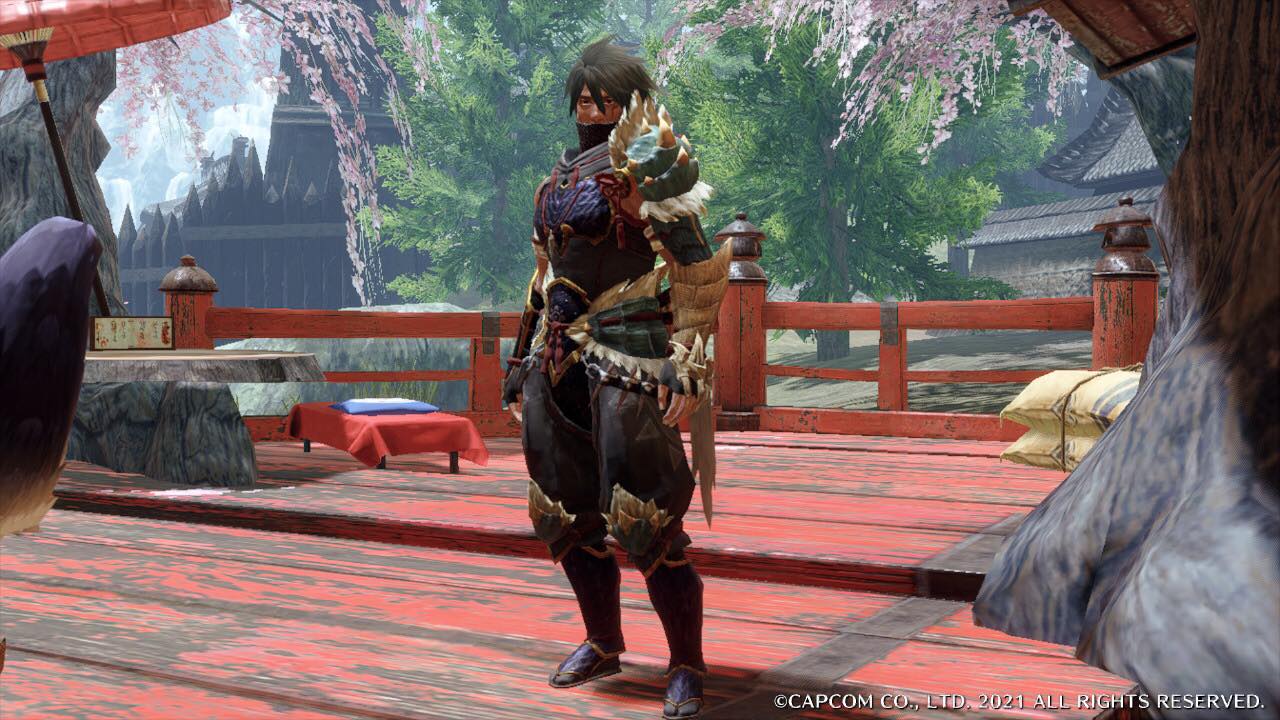 Around a decade ago I strolled into my local GAME with the intent of picking up a new release. I hadn’t decided on which – I was merely looking for something that took my fancy. I walked out with what was going to become one of my most longstanding gaming loves. Purely by accident, I might add – I had somehow hilariously misinterpreted what Monster Hunter entailed, assuming it was a hardcore take on Pokémon. In reality, Monster Hunter is as literal as it could be.

Monster Hunter Rise is the newest iteration of Capcom’s cult series, and I couldn’t be more eager to sink my teeth into it on Switch.

Twenty years have passed since the original launched on PlayStation 2, yet the premise remains (almost) the same. Some badass monsters have unexpectedly appeared, threatening local ecology and life itself, and it’s up to you to turn those monsters into fashionable hats, coats and better weapons while figuring out why they’ve suddenly appeared. Why, it’s Jurassic Park in reverse.

The quiet and idyllic Kamura village produces hunters with special talents. Good timing, because the ‘Rampage’ is upon us – a natural occurrence that takes place every 50 years, where the monsters become more aggressive and begin attacking Kamura.

As a newly graduated cadet, the village chief doesn’t expect too much from you, issuing simple quests initially to make better sense of the situation. This is just as well because your weapons and armour may as well be made from cardboard at this point. Stronger weapons and armour are gained by killing and cutting up monsters and foraging the lands for materials. Each monster has its own armour set providing stat bonuses and buffs, and a full set usually takes several struggles to acquire.

Fighting is more of a carefully executed dance than mindlessly hacking at your foes. The monsters are varied and learning each of their habits, elemental weaknesses and behaviours are key to winning and skinning. Breaking parts off, such as tails and horns, is sometimes the only way to harvest certain materials: “Knowing is half the battle.”

I’ve always found the basics of Monster Hunter fun, and over the franchise’s history I feel like Capcom has tried to push the game along with the times. Monster Hunter’s evolution was once largely based on new flagship monsters, but in recent years they incorporate revised play styles with new skills, weapons, and tools. In doing so, Monster Hunter Rise is easily the best Monster Hunter game on a Nintendo platform since Monster Hunter Tri.

Although new and unfamiliar players will find it difficult at first, I feel that Rise is probably the most accessible entry yet. This is partly in thanks to the new canine companions – yes, this is the first in the series to introduce doggos. Companions are customisable in appearance, and you can deck them out in their own themed weapons and armour for extra survivability and damage.

Menus are also stripped back and easier to navigate, making necessary actions such as upgrading gear much simpler to understand and access.

Wire bugs provide rapid vertical movement, enabling you to perform devastating and snazzy-looking aerial attacks, while also hitting those hard-to-reach areas of the map. Although they replace the clutch claw – which was an invaluable tool in World – they are infinitely more versatile to use. Their implementation also brings versatility to the environment design which is welcome after the confusing map designs of World.

Smaller quality of life changes have also been implemented, further improving accessibility and helping to get the upper hand on hunting. Endemic life, smaller animals, bugs and birds all have uses, from tripping beasts to spraying you with stinky monster repellent – handy if you’re on death’s door.

Once you have completed enough key quests, the ‘Rampage’ eventually begins which takes the form of a third-person tower defence game. You set up various defences to repel waves of monsters, saving villagers from getting shish kebabbed by beasts. The stakes are high, but the rewards are worth it, enabling you to craft better gear and take on the strongest monsters.

Monster Hunter isn’t best suited for a ten-minute fix – save files of a typical Monster Hunter game usually exceed hundreds of hours. No two battles are ever the same, and this provides an addictive quality. A monster might behave differently from one quest to the next, a hunter may join the quest and have better or worse gear, or another monster may wander into the vicinity and decide to get stuck in. Unscripted moments often thrill.

Capcom will likely introduce timed events in the future, featuring the chance to win tickets for new gear while integrating new monster subspecies. In the past, these events are free and provide lots of new goodies, bringing you far more bang for your buck and diversifying the joy of hunting.

I’m going to be playing Monster Hunter Rise for months to come. It’s fun, but the grind is real, requiring you to take multiple poundings and learn to love it just for the tiniest chance you might get the rare drop you need to complete an armour set.

It’s a perfect blend of everything I loved about the series when I first discovered it, and the modern quality of life changes make it so addictive and accessible. There’s a lot to fall in love with, and this hunter always has a well-cooked steak on the fire for hunting buddies (as long as they have a Nintendo Online Pass.)