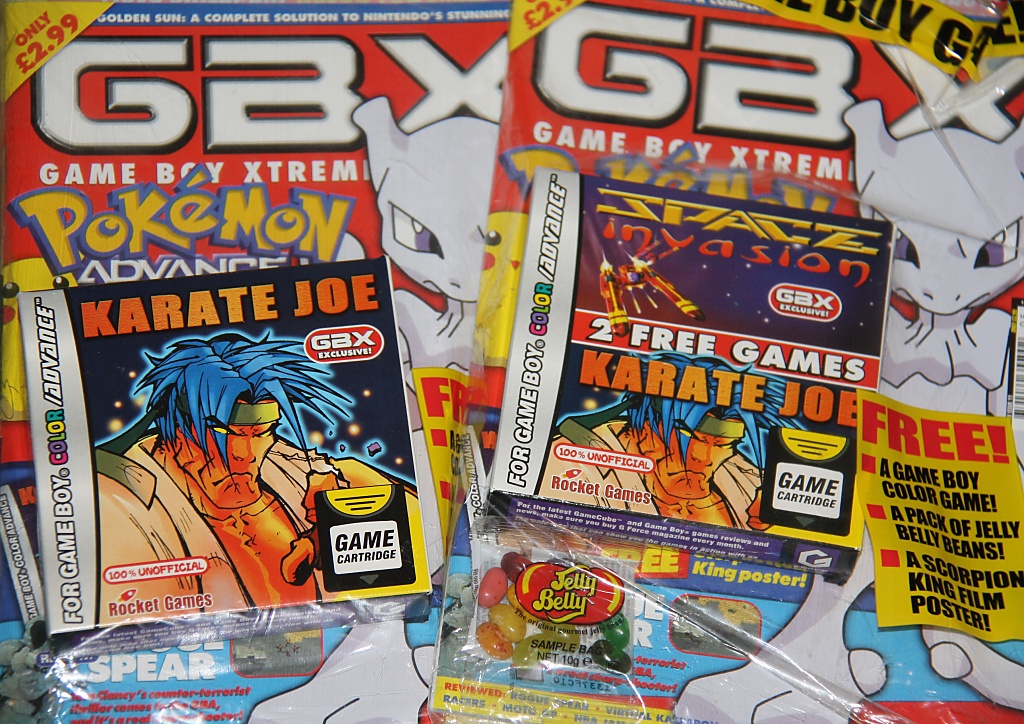 A premium cover-mounted gift isn’t uncommon for the debut issue of a new magazine, helping to guarantee strong sales. A few examples spring to mind, such as the ‘Time Boy’ digital clock keyring given away with Nintendo Magazine System’s premier issue, and the free PlayStation memory card taped to PlayStation World’s cover.

This makes the final issue of GBX (aka Game Boy Xtreme) magazine quite the irregularity. Thin Ice Media’s UK-based publication went out with a bang, including a bag of jellybeans. Oh, and a boxed Game Boy Color game. All for the mere sum of £2.99.

If this sounds a bit too good to be true, you’re right – there is a slight catch. It wasn’t an official Game Boy Color cart, but rather an unlicensed (unofficial) release from Datel. The noughties equivalent of the NES’ Action 52 or Bible Adventures, if you will.

The included freebie varied. Some issues were packaged with Karate Joe, with others included a double pack of Karate Joe and Space Invasion. It’s possible more variants existed – GBX magazine wasn’t too popular, and so information about its existence (in general) is thin on the ground.

Mostly taking the form of refreshed arcade classics, the included games were simple affairs developed by small studios. Space Invasion was, of course, a clone of Space Invaders (albeit a remarkably colourful one) while Karate Joe took inspiration from 1984’s Kung-Fu Master, complete with a main character sprite resembling Street Fighter’s Ryu.

Other games in the somewhat illegitimate range included simple takes on football and basketball in addition to a top-down ATV racer. Painter – a rejig of the BBC Micro’s Crazy Painter – was reportedly the best of the bunch.

These titles from Datel (released under the guise of Rocket Games) had been on sale for a while for around £15, mostly via mail order (although we do have a vague recollection of seeing them in Woolworths) and packaged cheaply. Nintendo, understandably, detested this kind of stuff as it bypassed their licensing and QA processes.

How copies ended up being bundled with a magazine isn’t difficult to explain. Thin Ice Media was a sister company of Datel, the UK-based peripheral manufacturer that mostly dabbled with cheat devices and discs that circumvented a console’s regional lockout. Datel used Thin Ice Media’s gaming publications to heavily push their products. Right to the point where, in this instance, GBX’s final issue was used as a vehicle to shift excess stock.

How many issues were produced is a mystery, but seeing the magazine was coming to an end it’s likely the run was extremely limited. The issue we grabbed, way back in 2002, was the only one we saw for sale that month.

As gaming magazine freebies go this one is remarkable, even if the quoted value of £30 is way off the mark. I don’t think anybody ever imagined leaving a newsagent with a Game Boy Color game strapped to a magazine. It certainly made the usual fare of cheat books and posters seem ordinary.