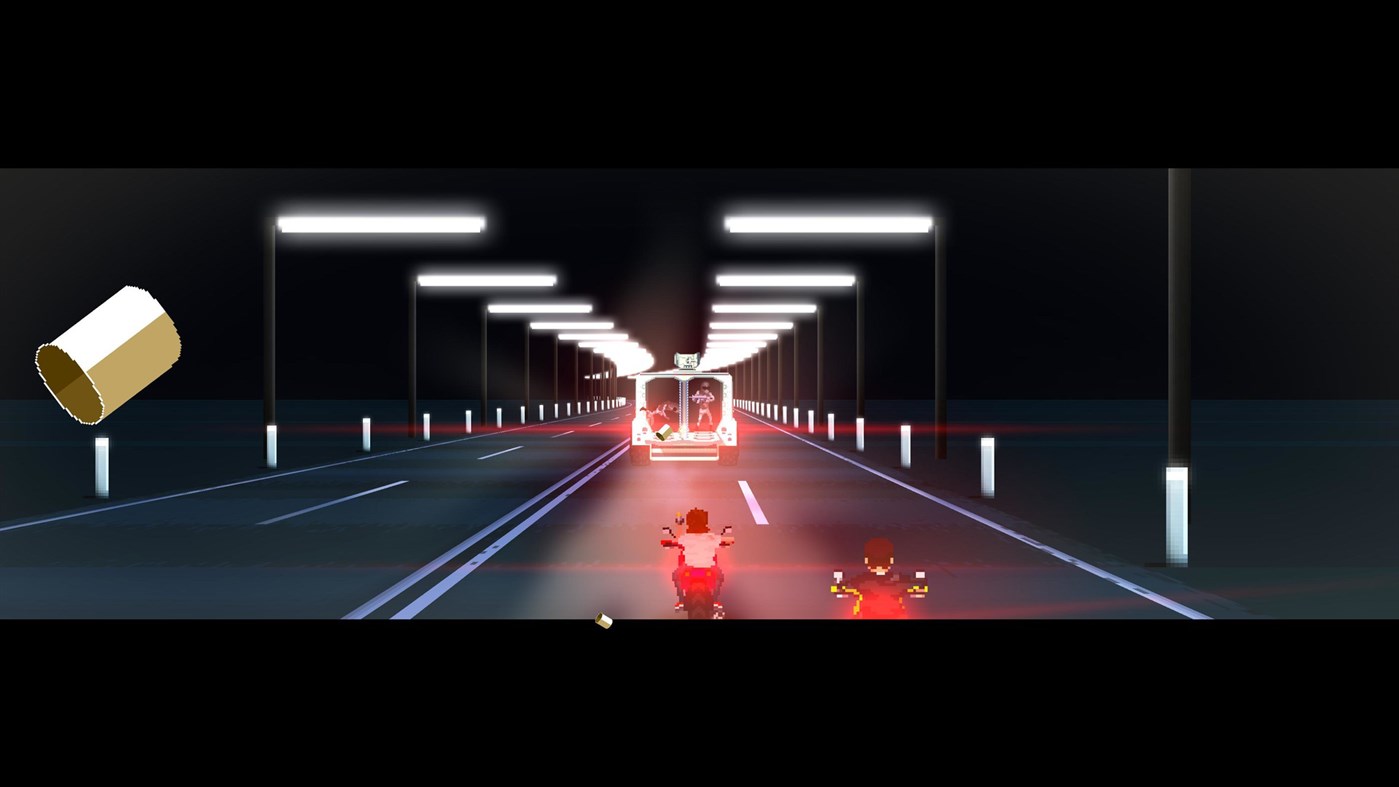 Although not an auto-runner, Gamechuck’s Speed Limit shares the same sense of urgency, constantly ushering the hapless central character – a nondescript chap caught in a time loop – onwards. Pursued by shade wearing FBI types, this mad dash for survival begins with a run ‘n gun shooting section on a train before escalating into a high-speed car chase. Then comes shooting while steering on a motorbike, eventually resulting in taking to the skies – in both a helicopter and a fighter jet. All the while the drum and bass soundtrack becomes more raucous, complementing the action.

Each section plays and controls differently from the last, testing and pushing your skills in unique ways. Featuring a one-hit death system, the run ‘n gun opening requires fast reflexes as you shoot, dodge bullets and leap from moving carriages. The car and bike chases call for precise and swift movement as you weave in and out of traffic while gunning down agents, shaking things up with a change of perspective. Airborne combat genuinely demands the reflexes of a fighter pilot, meanwhile, giving just a few precious seconds to move out of incoming fire by adjusting speed.

Knowing when to apply the brakes Speed Limit’s biggest nuance – it isn’t necessarily about going as fast as possible; it’s essential to slow down now and then to give enough time to manoeuvre.

Enemies are relentless in their pursuit, and so every section takes dozens upon dozens of attempts to clear, with the first few playthroughs likely leading to a death count well into the hundreds. Aside from the pause screen, which features calming ‘elevator’ music, there’s no time to stop and relax – each section continues seamlessly using brief transition animations as our hapless hero fearlessly leaps from one vehicle to the next. From beginning to end, this is a game constantly demanding your attention – taking your eyes off the screen for just a few seconds will doubtlessly result in death.

While Speed Limit features many arcade tropes – every section bares similarities to arcade games of yore, SEGA’s super scaler games especially – it does have modern blessings too. Checkpoints are proficiently placed, single-handedly eliminating any potential frustration, and restarts (complete with obligatory VHS rewind fuzz) are instant. The sound design is of a contemporary standard too, being thoroughly excellent. Bullets ricochet, tires screech, windscreens shatter and explosions boom.

Speed Limit is unquestionably leftfield – it’s a short experience which encourages you to play smarter and improve. As indicated by the achievement list, the ultimate goal is to achieve a 30min runtime – something that’ll require a lot of patience and practice. To put it into perspective, our first playthrough on easy mode (a name slightly misleading) took around 1hr 30mins. We eventually managed to bring down closer to an hour. Normal mode took us close to 2 hours on the first run, giving a lot of scope for improvement.

Obviously, your experiences will differ. Due to playing a lot of Road Rash in our youth we found the motorbike section a breeze but struggled elsewhere. If you’ve ever managed to conquer Battletoad’s notorious turbo tunnel, you may be at an advantage – this too is an elaborate and lengthy memory test, with no randomised elements to speak of.

Using retro arcade-style visuals as a draw, Speed Limit proves itself to be a compelling and addictive experience. It’s fleeting nature and focus on improving playtimes won’t please everyone – it’s easy to imagine some gamers completing it once and never returning – but arcade purists and the speedrunning community are likely to become engrossed in whiting their down their best times and death counts. A one-credit run will be a sight to behold.

Speed Limit is published by Chorus Worldwide Games and available on PS4, Xbox One, Switch and PC.