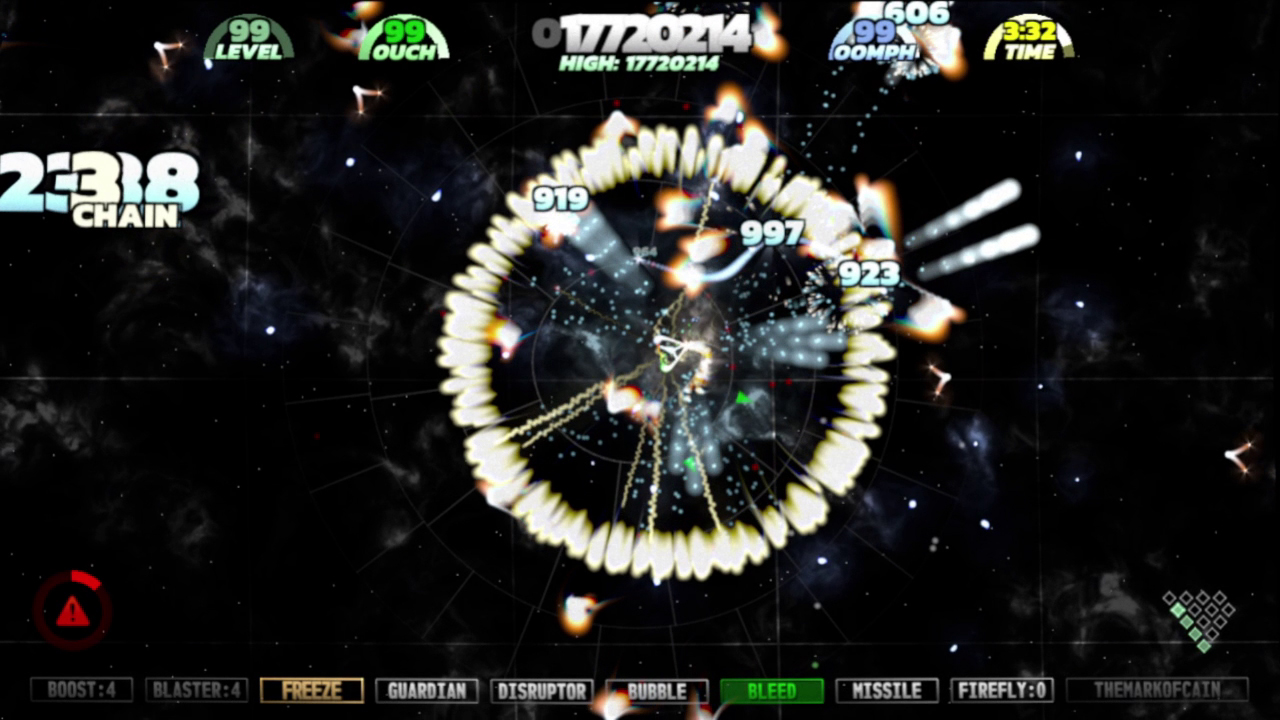 This twin-stick shooter is beyond great, and you should buy it as soon as possible. It’s a fun, neon-drenched affair with spaced-out Jeff Minter vibes, as quick as it is brutal. We’ve always lamented the lack of Geometry Wars games on Switch, and this manages to compensate in one fell swoop.

Bezier: Second Edition is remarkably self-assured. The fact that this is creator Philip Bak’s first game is remarkable, because everything is so thoughtful and deliberate. It feels like a specific artistic vision realised and communicated to the player. This begins with the simple act of starting a game. Instead of ‘Press Start’ you’re prompted to ‘Insert Coin’ and when you do (by holding down A), the menu screen shows some sci-fi techno and a logo that beats in time with the music, all while a gameplay video coated in CRT scanlines plays underneath. In mere seconds it communicates exactly what it is – a thorough arcade experience, right down to the ability to enter your initials.

It throws you into a spacey, rectangular, play area reminiscent of Geometry Wars. Left stick moves, right stick shoots. Kill everything and watch it explode into TV tube-distorted, colour-shifted particles. Avoid getting hit. Or try to. And try to avoid the invincible big baddie (referred to in the guide as a “proper berk”) that shows up at the end of each stage before moving onto the next.

The help menu fills you in on the more advanced ideas, but not before a warning that discovering the game yourself can be more rewarding. It also clues you in on the scoring system, ergo the online leaderboards, and the fact that Bezier’s scoring system includes around 30 different variables – some of which Bak has absentmindedly forgotten. It feels tossed away and funny, but it also serves to re-enforce the idea that this is a game made by a person and not a committee. Despite the sci-fi ships and explosions, this feels like a very personal project.

This extends to the narrative, which is obtuse, weird and a little unsettling. Something about leaving the physical world behind. All these snippets of nonsense/not-nonsense are fully voiced, by the way – another area that shows that apart from having heart and humour, the thing that really sets Bezier apart is polish. Just take the high score screen. Deleting a letter from your initials causes the letters to undulate. Does the game need to do this? No. Is it a nice touch? Yes. The dynamically changing music is also really, really, really good. Play it loud, as Nintendo used to say.

There’s also a daily mode, which is a 4 minute procedurally generated zones using dates of historic marriages within its algorithms. Three different difficulty levels and an endurance mode bolster the package further. The only possible downside I could mention is that sometimes the backdrops obscure and muddle the action, inadvertently blending explosions with detritus.

Because reviewing games sometimes comes down to tedious numeracy, I was thinking about what score to give Bezier. Here’s my justification for top marks: it’s a brilliant game, polished and executed perfectly. It isn’t a sprawling, open-world, industry-changing piece of work. It isn’t a seven-course tasting menu from the world’s fanciest chef. It’s a Cronut, the croissant-doughnut hybrid created by a New York patisserie – a mixture of influences that’s resulted in a delicious, moreish, treat.

Bezier: Second Edition is out now on Switch.